Here is your official recap of the adidas Campus 80s StockX IPO.

Here is your official recap of the adidas Campus 80s StockX IPO.

The following is a comprehensive breakdown of our recent adidas Campus 80s StockX Initial Product Offering™ (IPO). Before we get into it, a forewarning: this post goes deep into the numbers, so if you’re only looking for the TLDR, here it is.

Our IPO featured three exclusive pairs of Campus 80s, each designed and produced in 10 days by three different designers at the adidas MakerLab. Each sneaker was limited to just 333 pairs, never to restock or re-release again.

Over the course of three days, our IPO received nearly 10,000 total Bids (9921 to be exact) on the 999 sneakers available. To determine the price of each sneaker, we used a unique pricing mechanism known as a ‘blind dutch auction’, which produced different Clearing Prices for each sneaker in each size available.

Of course, now that the IPO is over, all three of these adidas Campus 80s can be bought and sold on our marketplace just like any other item, so if you missed out on your chance to buy the first time, you can still grab a pair today.

For more details on the IPO process and how these prices were determined, pull up a comfy chair and settle in for our deep-dive below.

In January of this past year, StockX made ecommerce history with the Ben Baller Did the Chain StockX IPO — Initial Product Offering. We released 800 slides, in black and red colorways, directly onto the StockX platform using a radically new pricing mechanism that is traditionally used to price bonds and securities.

The idea was simple: rather than set an arbitrary retail price, we would leverage the power of the market and allow the dynamics of supply and demand to dictate what the price would be. Last week, we decided to take our IPOs to the next level, partnering with adidas, a global leader in the footwear game, to release three variations of the iconic Campus 80 silhouette, created by three different designers through its MakerLab.

Each of the three creators brought their own distinct vision and style to one of adidas’ most OG silhouettes. From the work-in-progress feel of London-based designer Helen Kirkum, to the vibrancy and historical nods of Alex Nash, to the simplicity and cultural message of Tokyo-based Shun Hirose, aka Recontoure. Each created a shoe that felt like a custom one-of-one, something special and priceless. But through our IPO, we were able to release them to the mass market, allowing the customer to determine the value and hype. It’s truly a game changer for how brands and designers are able to approach sneaker design and releases moving forward.

Before digging into the results of the IPO, let’s review the details of how the auction process worked. Like our first Ben Baller IPO, this one also utilized the “blind dutch auction” – the same auction model that is used to price equity in a traditional stock market IPO. On Tuesday, October 15, at 9:00 PM Eastern Time, the IPO went live and the Bidding began. StockX customers went to the IPO product page of the Campus 80 colorway they wanted to purchase, and then they placed Bids at the price they wished to pay for a given size.

These Bids were 100% anonymous; no one could see the dollar amount other customers were Bidding. The Bidders were told the total number of sneakers available in each size, and the total number of existing Bids that had been made for each sneaker. At any point moving forward in the week, Bidders could go back and change the amount of their Bid. On Friday, October 18, at 9:00 PM Eastern Time, the IPO closed and the Bids were locked.

The distinctive feature of the blind dutch auction model is that all winners in a given size were charged the same amount – what is called the “Clearing Price”. There are two important numbers in determining the Clearing Price. The first is the total number of units available for a given size sneaker. Let’s take the example of size 9.5 of Helen Kirkum’s sneaker. For that size, there were 55 units available. So the top 55 Bidders who Bid on the size 9.5 were winners.

All told, the Campus 80s IPO garnered 9921 Bids on the 999 sneakers that released. The Bids ranged from a high of $1683 to a low of $1. We observed significant international interest in our IPO: 22% of Bids coming from outside the United States, with the United Kingdom representing the highest share of international Bids.

Since transparency is a core tenet of StockX, we put together a table (see below) that shows every single winning Bid placed in this IPO. The table is extremely large so you’ll want to double-click to zoom in. We also created an even-larger table showing every Bid for every size of every sneaker, which you can download here.

But to fully understand exactly how the Clearing Price for each sneaker was determined, it’s helpful to dig a little deeper into the underlying dynamics behind the IPO, and how the forces of supply and demand interact to produce a true market price for a product.

Like any market pricing model, the Clearing Price in this auction was driven by two basic forces: supply and demand. First, let’s talk about supply. Each of the creators limited their production to exactly 333 sneakers. The purpose of this was to keep scarcity (and thus, hype) for the sneakers equal for all three sneakers. However, each creator got to determine the size run and the quantity produced of each size. The following chart shows the supply (i.e. quantity) of each sneaker-size combination for all three sneakers: 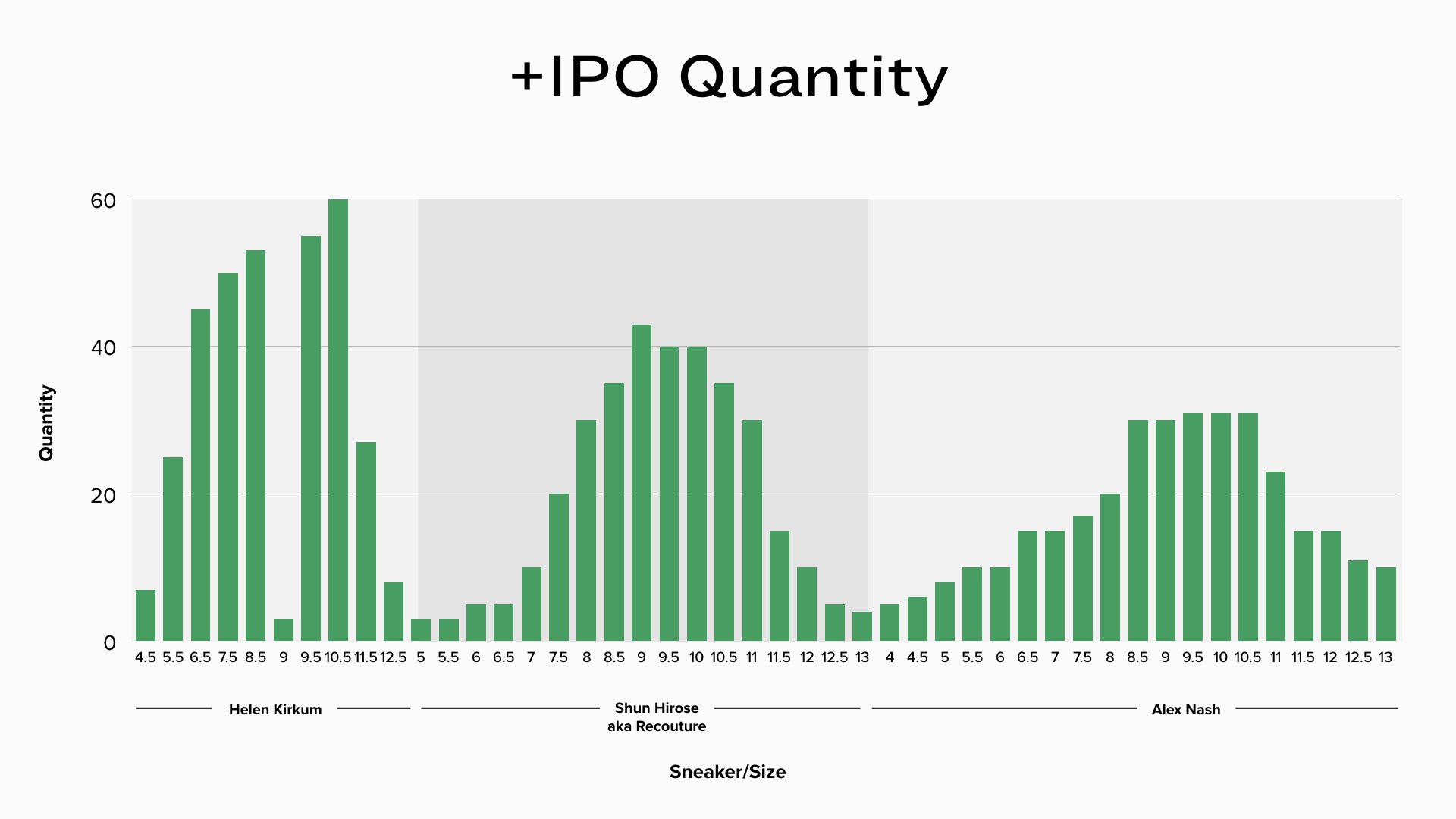 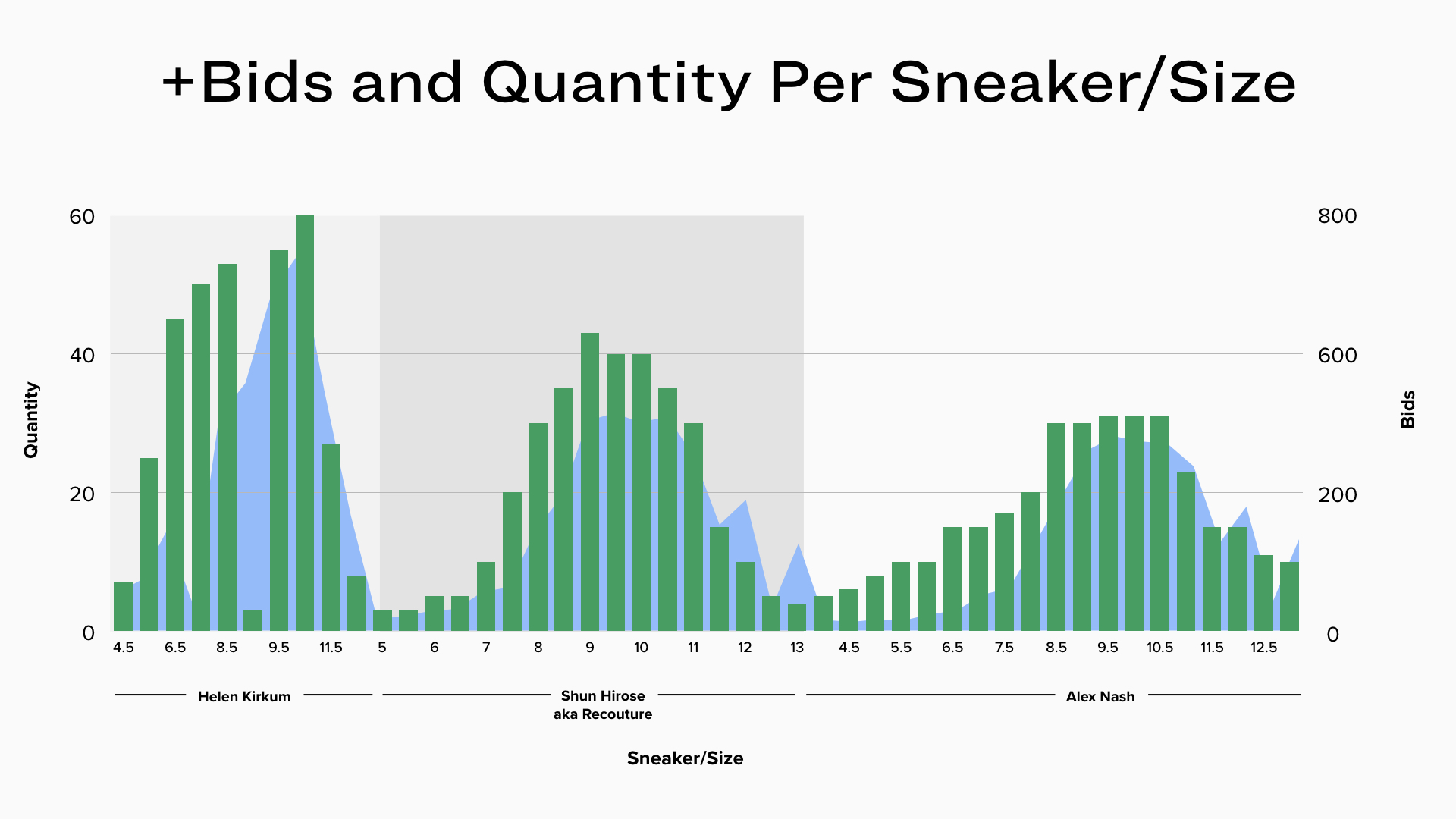 As we would expect, the number of Bids tracked closely to the supply of each sneaker. The creators wisely produced more sneakers for the popular sizes (i.e. 9 and 10), and these sizes garnered the highest number of Bids.

But if you look closely at the chart, you’ll notice there were some cases where the number of Bids far outstripped the available supply. The most obvious case is Helen Kirkum’s size 9. That sneaker received 479 Bids – the 3rd most Bids of any sneaker in the entire auction. Yet there were only 3 total pairs available in that size. In this case, the ratio of Bids to Quantity – the ratio of Demand to Supply –  was nearly 160:1. By contrast, the average ratio of Bids to Quantity was roughly 18:1.

The following chart shows the ratio of Bids to Quantity for each sneaker-size combination in the auction: 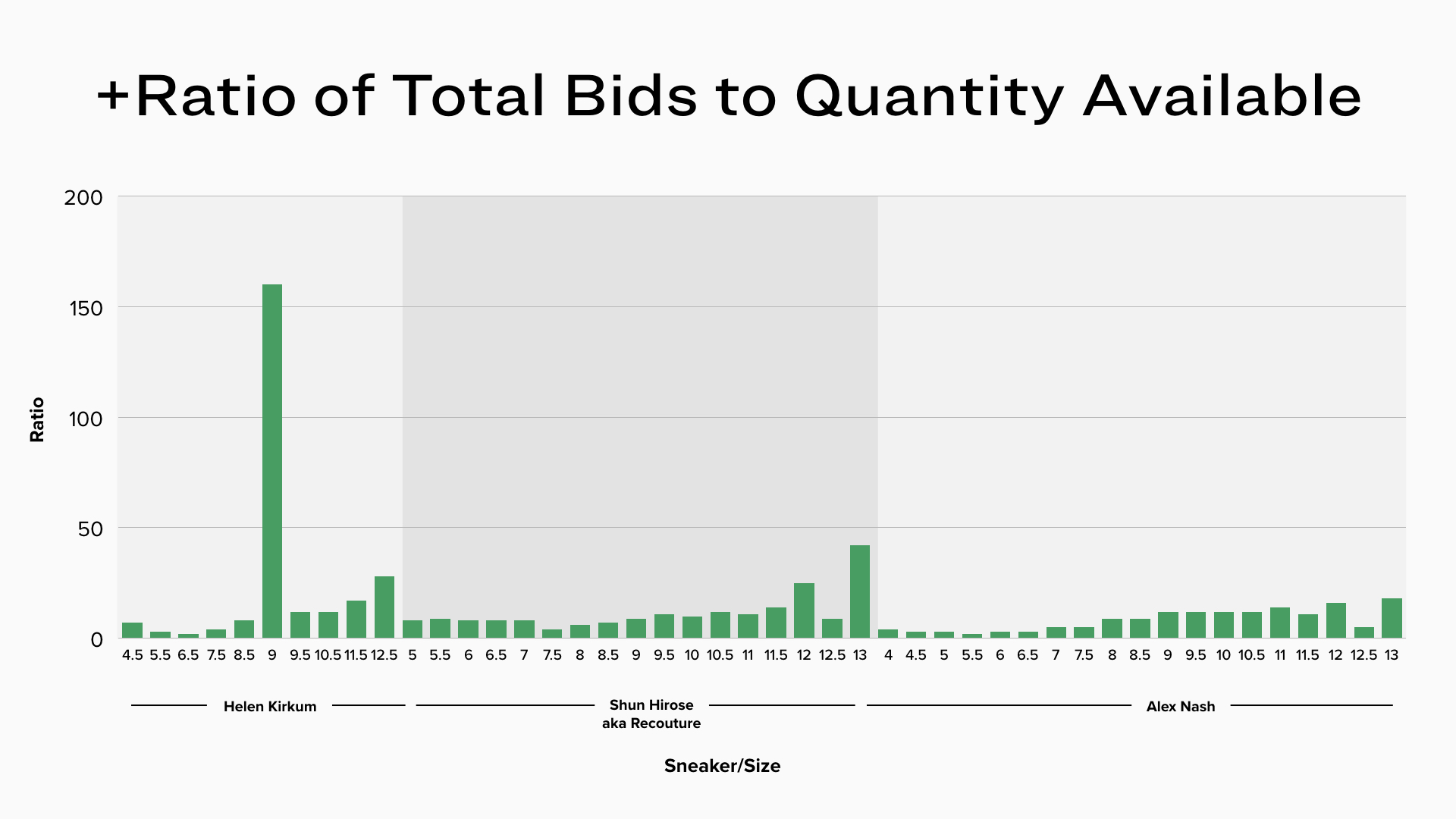 You can see Helen Kirkum’s size 9, represented by the extremely high bar near the y-axis. There are other outliers as well. For size 13 of Shun Hirose’s sneaker, there were 169 Bids chasing after just 4 available pairs, for a Bid:Quantity ratio of 42:1. The ratios for Alex Nash’s sneaker were more evenly distributed. In his case, the highest ratio was observed for his size 13, where 177 Bids chased after 10 available pairs, resulting in a ratio of roughly 18:1.

What do these ratios represent? In a word: hype. After all, hype arises from the discrepancy between demand and supply. The more that demand outstrips supply – the higher the ratio between them – the bigger the hype. And this brings us to the Clearing Price.

As we all know, the price of an item follows its hype: the bigger the hype, the higher the price. So it isn’t surprising that the Clearing Prices for each item closely followed the level of hype. The following chart shows the clearing price for each size of sneaker: 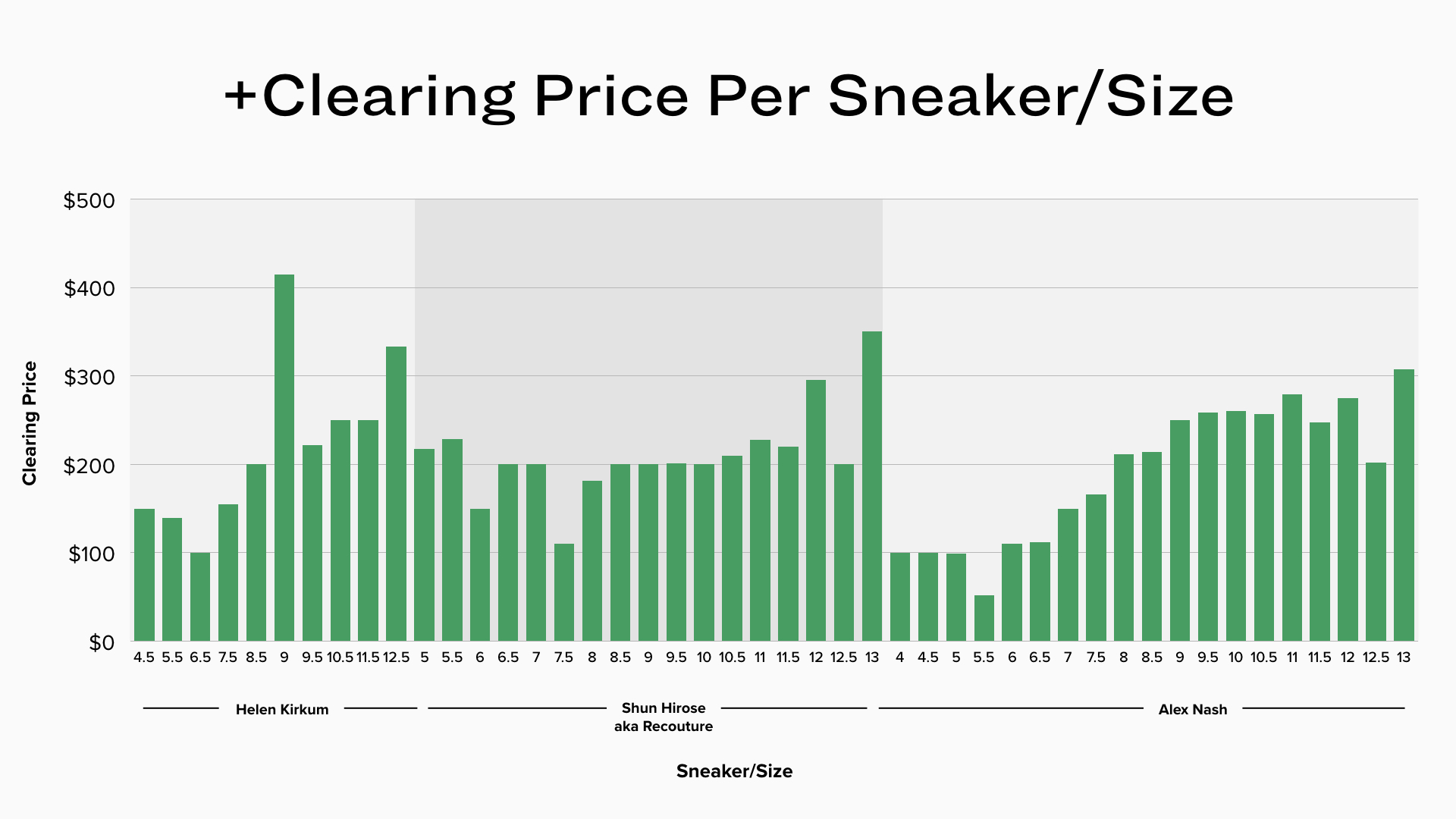 While prices were high for many of these sneakers, it’s important to note that that the vast majority of winning Bidders ended up paying less than what they Bid. As discussed above, the most unique feature of a blind Dutch auction IPO is that everyone pays the same clearing price, which is determined as the lowest Bid matched to the quantity available. The following chart shows the percentage of winning Bidders, for each sneaker size combination, who ended up paying a Clearing Price that was less than their Bid: 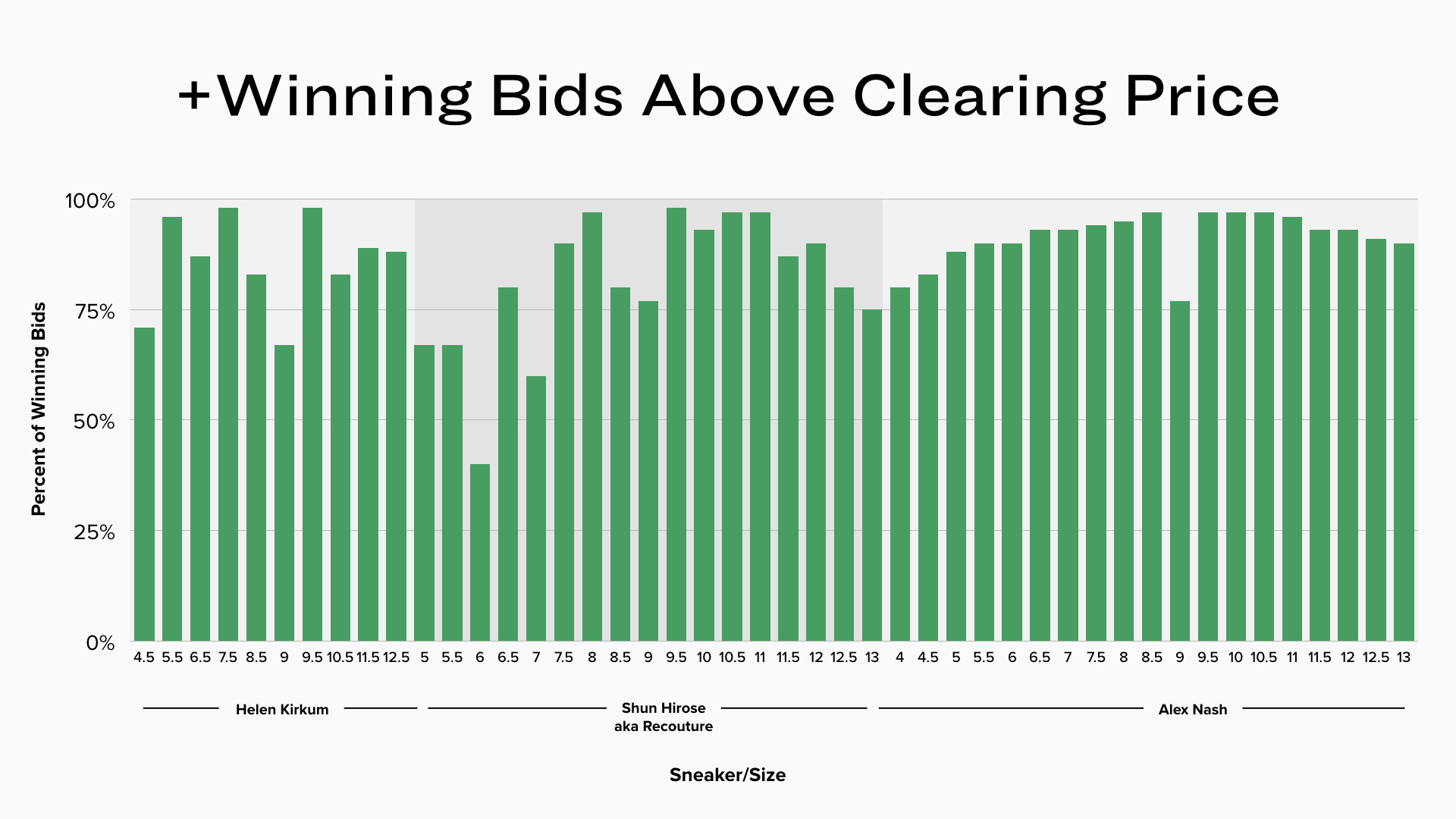 Simply put: everyone came out a winner with this IPO. As noted above, 90% of winning Bidders paid less than what their original Bids were. Meaning that the people who walked away with the sneakers in hand ended up paying less – in some cases, far less – than what they actually Bid.

Not only that, the creators came out as winners, too. By utilizing our IPO model, the creators of these sneakers were able to realize additional market value on each pair sold. And in a way, this was even a win for the people who didn’t win the auction. Recall that demand for these sneakers significantly outstripped the available supply. Only 999 total sneakers released, and there were nearly 10,000 total Bids. That means there there roughly 10 Bidders chasing after every 1 sneaker. If these had released through a traditional retail channel, we would have seen the usual chaos attending similarly hyped releases: long lines, frustrating raffle drawings, and dreaded bots.

Our IPO model avoided all of those headaches. Bidders didn’t have to contend against bots, they didn’t have to stand for hours in a line for the hope of a W, and they didn’t have enter an arbitrary raffle. They had the same fair and equal shot at winning the sneakers as everyone else. Moreover, if the losing Bidders really want to buy these sneakers now that the auction is over, they can always go out and cop them on the StockX secondary market. All three Campus 80s are now listed on our platform, and anyone and everyone can go and place a Bid.

This is the remarkable feature of the blind dutch auction model: everyone wins. We believe our IPO pricing method, with it’s indisputable advantages over traditional retail, has the potential to revolutionize sneaker releases and represents a significant step forward for e-commerce in general. We’re excited to apply it to more products in the months ahead.