– StockX is giving away a pair of $30K sneakers to kick off the partnership, which will focus on Eminem’s lifelong love of sneakers – 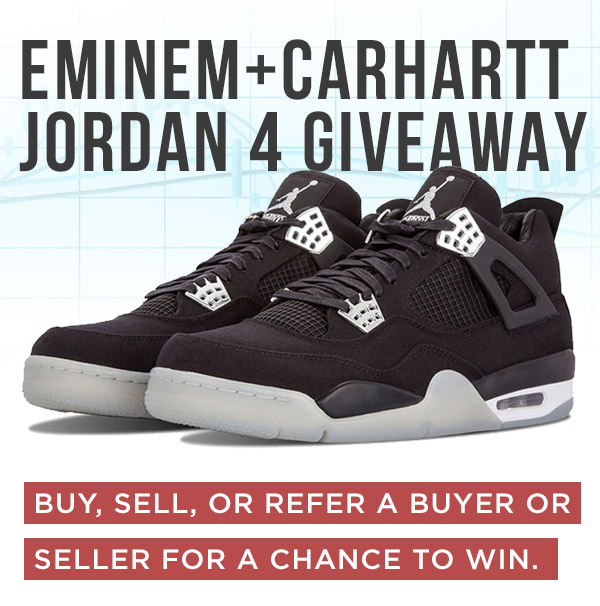 The company has targeted the sneaker resale market as its first vertical, and the partnership will continue to accelerate StockX’s growth by building on the rappers’ long and personal passion for sneakers to create exclusive content and access to rare sneakers from Mathers’ personal collection. As part of the partnership, Mathers and longtime manager Paul Rosenberg will be investing in the online trading platform.

Detroit-based StockX is unlike any traditional e-commerce or auction website. StockX is a live ‘bid/ask’ marketplace that allows buyers to place bids, sellers to place asks, and execute a trade when the seller’s ask price meets with a buyer’s bid.

“Sneakers have always been a huge interest of mine, for at least as long as I’ve been rapping, and I’m proud of the fact that I’ve had so many collaborations with Nike and Jordan Brand,” said Mathers. “I really like the fact that sneakers are a big part of what StockX is doing. When I found out that they happen to be doing it from downtown Detroit, it made even more sense to get involved.”

“We believe in the power of StockX to change the way people buy and sell things online and look forward to helping Josh Luber and the StockX team make that future a reality,” added Rosenberg.

StockX, which launched in February of 2016, was co-founded by Luber, who serves as the company’s CEO, and Dan Gilbert, founder and chairman of Quicken Loans and majority owner of the Cleveland Cavaliers.  Recently, StockX closed an investment round that included Silicon Valley investor Ron Conway and his SV Angel fund, and Detroit Venture Partners (DVP).  Eminem is the first of what is expected to be several high profile investors.

In the four months since launch, StockX has reached major milestones with the launch of its iOS and Android apps. While the multi-billion dollar sneaker trading market is StockX’s first vertical, there are numerous other categories that the ‘stock market of things’ is planning to add to its platform in the near future. The platform is open in the United States, but sneakerheads in other countries will very soon be able to use StockX.

“StockX is already proving that a ‘stock market of things’ is a viable and better way to both buy and sell certain product categories,” said Luber. “Eminem’s partnership is particularly meaningful in that he’s a true sneakerhead who genuinely understands the market and is excited to help grow the community.  Beyond that, he’s created one of the worlds’ iconic brands, so it’s an honor to have him and Paul as both investors and strategic partners.”

To kick off the partnership, StockX is giving away three coveted prize packages:

Any StockX participant who executes a sneaker trade on either the buy or sell side and/or refers a new participant to the StockX platform through Thursday, June 23, 2016 will receive one entry into the contest. For more information on the promotion click here.

Over the course of his career, Eminem has sold over 110 million albums and 169 million singles worldwide.  He was Nielsen SoundScan’s top selling artist of the 2000s with 32.2 million albums sold in that decade in the U.S. alone. In addition, Eminem was also named Billboard’s Artist of the Decade for the same period, 2000 through 2009.  Eminem has won 13 Grammy Awards and an Academy Award.  His last album, 2010’s Recovery, was the first album in the US to ever go platinum digitally. His new album The Marshall Mathers LP 2, was released on November 5, 2013 and debuted at No. 1 on the Billboard 200 albums chart selling 792,000 copies in its first week.

StockX is the world’s first online consumer “stock market of things” for high-demand, limited edition products. Participants buy and sell authenticated products in a live marketplace where they anonymously trade with stock market-like visibility. The StockX exchange offers buyers and sellers historical price and volume metrics, real-time bids and offers (asks), time-stamped trades, individualized portfolio tracking and metrics, as well as in-depth market analysis and news. StockX launched its inaugural marketplace in the secondary sneaker space with plans to expand to additional consumer product segments that have a natural need for a live secondary market.