Patrick Miller and Patrick McNeil of FAILE talk about their exclusive FAILE x Deluxx Fluxx x ToyQube DropX, explain the FAILE style, and how they create new narratives and icons.

Patrick Miller and Patrick McNeil of FAILE talk about their exclusive FAILE x Deluxx Fluxx x ToyQube DropX, explain the FAILE style, and how they create new narratives and icons.

This article is part 12 of 13 in the series: No Curator

Childhood best friends, Patrick Miller and Patrick McNeil, would launch FAILE, their artistic collaboration, in 1999. Reveling in fragmentation, FAILE explores and reveals duality through collage and appropriation – a style they’ve honed since their early teens. FAILE has shown throughout the world, in various spaces and places, from gallery shows in London and New York to installations in Mongolia and Portugal.

We talked with the New York-based artists shortly before their exclusive, limited edition DropX release of their FAILE x Deluxx Fluxx x ToyQube Astro Boy figure and hoodie about the genesis of their artistic partnership, how they use collage and bricolage, and coming full circle with their StockX partnership.

How did FAILE come together?

Patrick Miller: Yeah. Want me to take that one?

Patrick McNeil: Yeah, you could probably take most of them.

Patrick Miller: Okay. Well, Patrick and I have been best friends since we were 14 years old. So all through high school, we shared sketchbooks and had many of the same influences through high school and early college. We collaborated a lot while in art school. I was in Minnesota at the Minneapolis College of Art and Design, and Patrick was at FIT in New York. And we would just take a lot of trips back and forth visiting each other. We go to the silkscreen labs and make large-scale monograph prints, just experimenting. 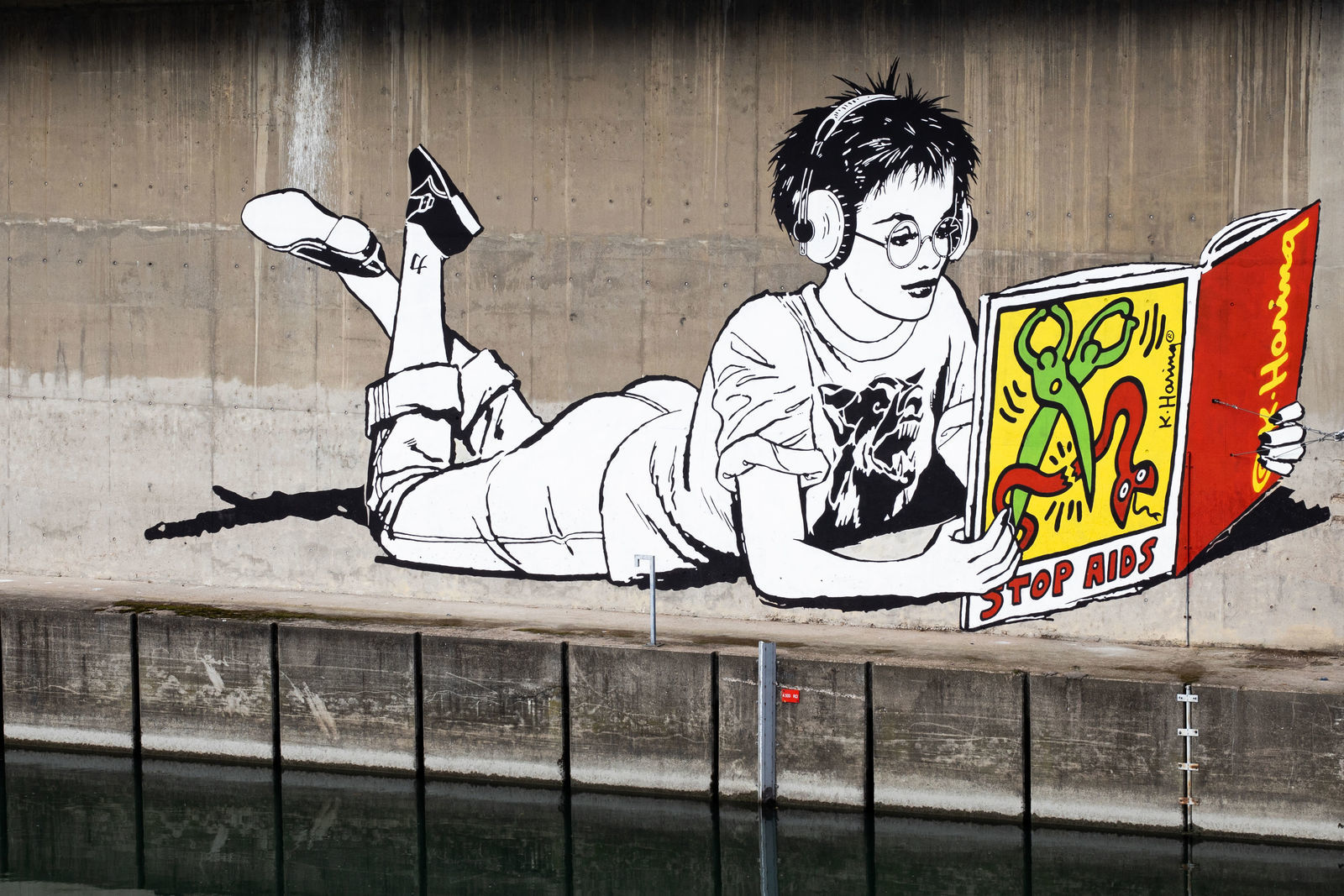 FAILE’s On the Shoulders of Giants, a New Wave of Hope (Lyons, France, 2019)  pays homage to Keith Haring in collaboration with the PAINT (RED) SAVE LIVES campaign in the fight against AIDS.

That was happening at the same time that Patrick [McNeil] was starting out in the early street art movement. In the late 90s, early 2000s here in New York. It was a pretty small group of people that were more on the street art side of the coin, rather than graffiti and some of that stuff. And I think both of us were really enamored by the dialogue that would happen on the street – the connection to an audience outside of a gallery, how organically alive the work felt, and the different contexts that it existed in. We really grew over a five-to-seven year period into the mid-2000s, where we focused on the fine art side and the street side, trying to grow both of those and make images that spoke to people, told different sort of stories through our language, and created this iconography that became recognized as the FAILE style.

Patrick Miller: I think cut and paste are very much at our heart. That’s kind of how it started with X-ACTO® blades and photocopies – things that always can translate into silkscreen printmaking. So this sort of heavily layered style – collage – appropriating bits and pieces to create a new narrative or a new icon. Over time, watching what would happen on the street with rips and tears and how things would sort of layer and suddenly be juxtaposed together became another reflection of the cut-and-paste style. And then, over time, I would say quilt making became yet another way of a craft movement of weaving together these bits and pieces of objects that have their history into a singular piece. And I think FAILE’s always been about that, with just a little bit more of a raw aesthetic. 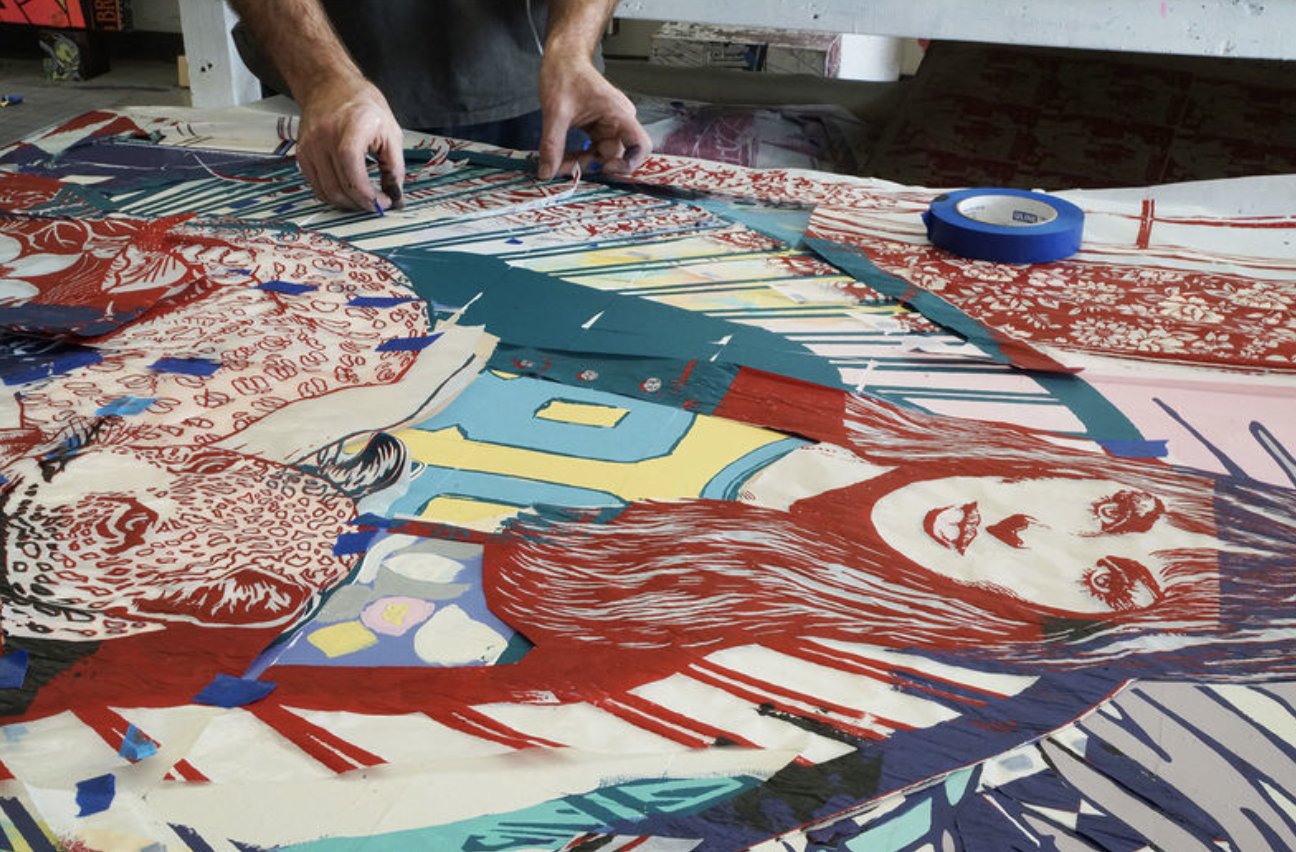 FAILE in the studio, crafting their style.

How does global culture influence your work?

Patrick Miller: It’s interesting how that has changed over time. In the early days of FAILE, such a big part of it was traveling and collecting things that you’d find on the street. It was all kinds of things, and appropriating the worlds we found to weave together different narratives, or different mythologies, or different parts of culture to make these different hybrids. And it’s been interesting to see how narratives about culture and cultural appropriation have developed over the years. I just think that what we did was a huge part of celebrating how all these cultures weaved together. Especially living in New York City, you’re always left with this mish-mash of so many different cultural aesthetics.

Patrick McNeil: I think I’ll add to that: hip hop. A Tribe Called Quest or Public Enemy would take old jazz hits or old found music and put new spins on it or resample the beats, giving the source records new life and new context. That was something that really resonated with us and how we look at art and making art.

Patrick Miller: Like remix culture. We’re always trying to tell a specific story and give you a reference point where you might connect back to something bigger.

What’s the story behind the Deluxx Fluxx project?

Patrick Miller: Deluxx Fluxx originally started as a collaboration with the artist BAST in 2010 in London at Lazarides gallery. It came out of a conversation about how we grew up in 80s’ arcades, how much we loved the sounds, the little bit of the seediness, and the experience of being young in this crazy hyper environment. So we created our own custom arcade cabinets, video games, music, and these big black light rooms with foosball tables. It just became a huge way to celebrate our work through the lens of these objects. We did this show several times as pop-ups in museums, galleries to large-scale experiences, and then to the nightclub in Detroit. It became this sound and vision, this experience exploding when you walk into it.

Patrick McNeil: Looking at the arcade cabinet as a work of art, from an architectural, structural standpoint in sculpture, from a sound element, and a digital element. It allowed us to put our art in a situation that the public could interact with. This is what got us excited in the beginning because it was unlike any art show that we’d done, people would come in, and you could just feel the energy. There was so much laughter, enjoyment, and energy in the room that was unlike anything we’ve done before. We really made something special.

How does Astro Boy fit into your world and work? What’s the significance, and how did he become part of the DropX?

Patrick Miller: Deluxx Fluxx is a project that we’ve been working on for the last 11 years, and it’s a celebration of a sort of old 1980s’ arcades. The kind of places where these old video games were and how they influenced animation, anime, and a lot of just those early animated styles. And I think Astro Boy has been at the beginning of a lot of this – all those icons representing a lot of the things that we grew up with from cartoons. But again, just from such a different cultural perspective, there was always an aesthetic and a style to Astro Boy that really made it stand out. So when we had the opportunity to work through these ideas and icons through our lens, it made sense that Astro Boy would show up at Deluxx Fluxx. It just became a really fun opportunity to celebrate both worlds. 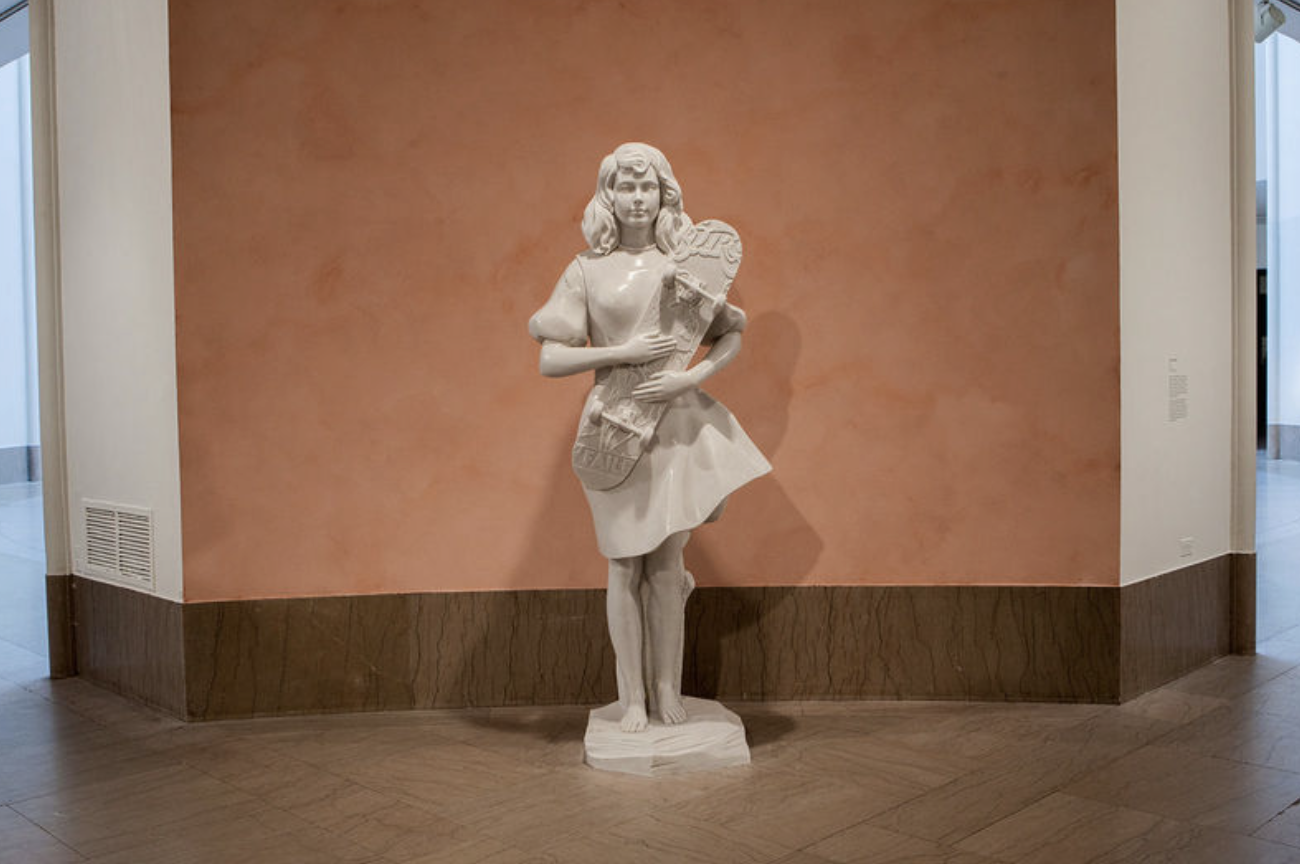 What has been the most memorable experience in your creative career?

Patrick Miller: We’ve had a few. We created this large-scale temple in Portugal. That was a really amazing experience. Showing at the Tate Modern in London. We built this massive tower for the New York City Ballet, and showing here at the Brooklyn Museum.

What’s the difference between art and consumer products?

Patrick Miller: Boy, that line’s gotten so blurry. It’s funny because I remember the first time I saw Murakami on a Louis Vuitton bag was really the first time where I felt it elevated both artist and product together. Now there have been just so many collaborations in that way that I don’t know if it still elevates. I still think consumer products are more mass-marketed, more attainable in ways that art is not. But art has taken a lot from mass culture and mass consumerism, especially in how it’s been put out there. It’s hard to know where that line exists anymore. I see what Alessandro Michele is doing at Gucci, and those things live as fine art types of pieces. They’re really beautiful. There’s a certain kind of craft, and some of the best artists become that well-known. They become brands unto themselves. The line is very blurry. 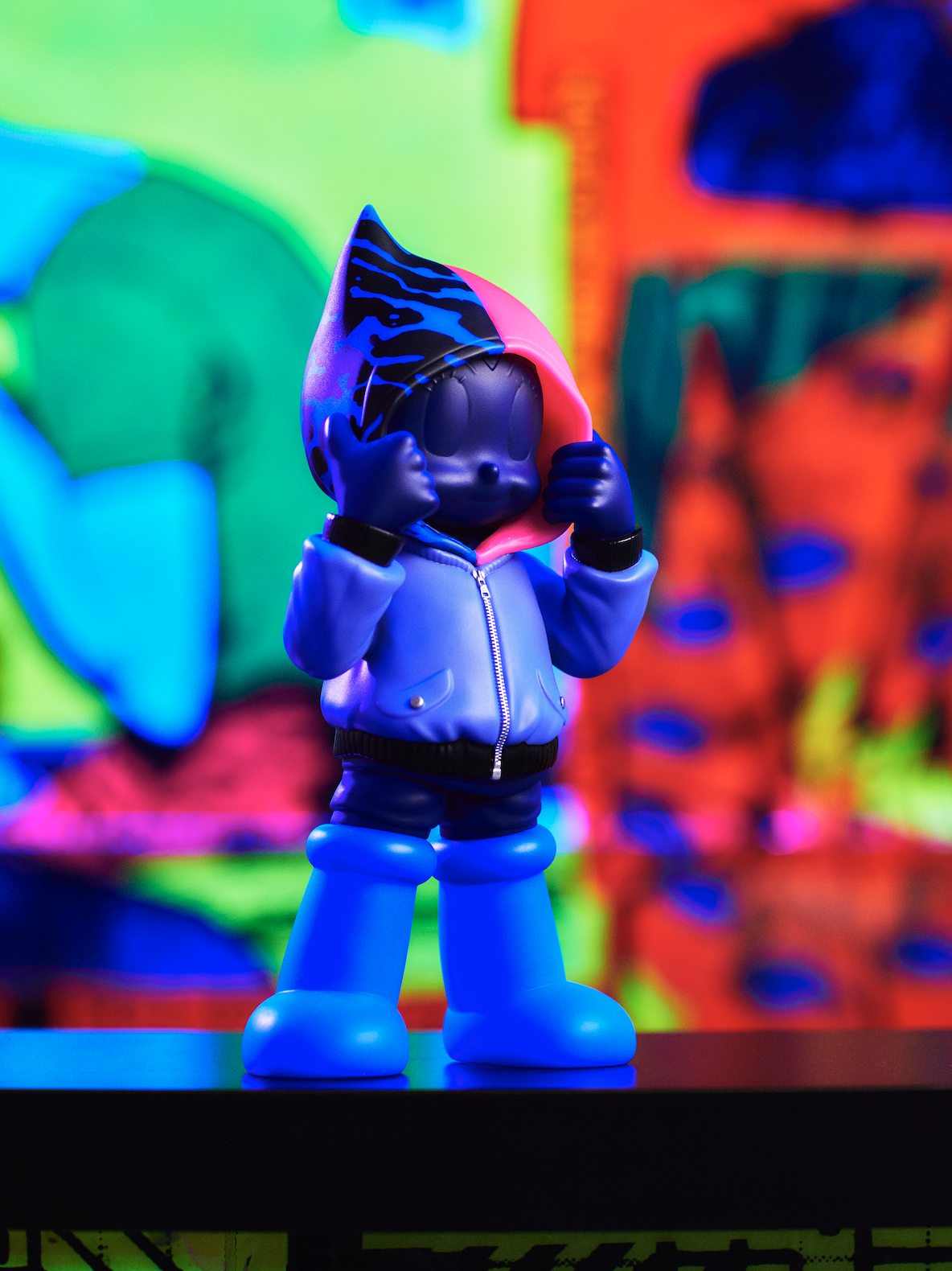 What’s most important about this project and the DropX?

Patrick Miller: For us, it’s been a cool opportunity to bring together Detroit-centric things between StockX and Deluxx Fluxx. We’re trying to tell that Detroit story a little bit and to have fun with some of the things that have come out of Detroit. We’ve been really excited to be a part of the experience and just see the changes happening in Detroit over the years. All the energy and all those sorts of good vibes that we feel every time we go there – that’s been something that we’ve been really excited to be a part of. And it’s cool that this project brings together a few of those things.

Also, this is the first vinyl toy that we’ve done and the first time working with ToyQube and StockX. We’re just excited to bring together the FAILE world, the Deluxx Fluxx world, Detroit, StockX, and Astro Boy. There’s a lot of little pieces all coming together, which is the theme of a lot of our work. It’s how all these little bits and pieces come together to make something totally new and whole.

Patrick Miller: It really does.