Update: The following people were mistakenly left off our Top 25 list: BULL1TRC (55k subscribers), DBtown24 (48k) and Zaya X (20k).  That was our fault; we just missed ’em.  Sorry about that. We’ll do better next time.

A few weeks ago we posted “Sneakerhead Influence by the Numbers” where we ranked 33 sneaker people, sites and shops based on their aggregate Facebook, Twitter and Instagram following.  The feedback from that post was fantastic, but we were asked at least a few times, “What about YouTube?”  Well, let it never be said that Campless doesn’t strive to give the people what they ask for.

We at Campless are data experts, not social media mavens, so we’ve invited one of the top YouTube sneaker influencers to assist.  [Insert obligatory Cliff Paul assist joke].  TBlake was actually one of the very first people to catch on to what we’re doing, posting a video about Campless way back when we were just data pups.  So it only makes sense that he help us out.  We’ll be honest – we don’t watch too much YouTube.  But we are certainly aware of it’s growing impact on sneaker culture.

“Relative to other communities on YouTube, sneaker channels have a lot of growth to do.  However, it wasn’t until this past year (2013) that a sneaker channel broke the 100k mark – now we have several.  There are also several users who have surpassed 50k, numbers previously unprecedented and certainly a sign of growth and interest.”

The most significant limitation of our first influence analysis is that followers is an overly simplistic measure of influence.  It ignores engagement metrics like comments, retweets, favorites, likes, etc.  For YouTube, we recognize the same issue.

“Number of subscribers is a good starting point.  While reaching the ‘000th’ subscriber on YouTube is certainly satisfying, the most important, but least transparent, measure of influence is audience retention – how long viewers spend on any given video.  Retention can vary based on topic, brand, even strategic video editing.  For purposes of the Campless analysis, however,  audience retention is an analytic that only the content creator can access, so it can’t be used to determine who has more influence.  But keep in mind that User X with 1000 subscribers could have a much greater retention than User Y with 100,000 subscribers.  Because audience retention isn’t available, the next best queue comes from subscriber sharing, which can be measured through likes, comments, and +1s of posts on Google Plus.  Unlike retention, this data is publicly available if you click through each video on a brand’s or individual’s YouTube page.”

Notwithstanding TBlake’s recommendation to include YouTube sharing metrics, our analysis today will focus on number of subscribers – just like the previous analysis focused on followers and not engagement metrics like retweets.  As he mentioned above, number of subscribers is a good starting point.  These posts are just the tip of the iceberg for sneaker influence.  We want to start simple with our audience and, together, build our way up to more complicated metrics analyses.

The candidates, in alphabetical order: 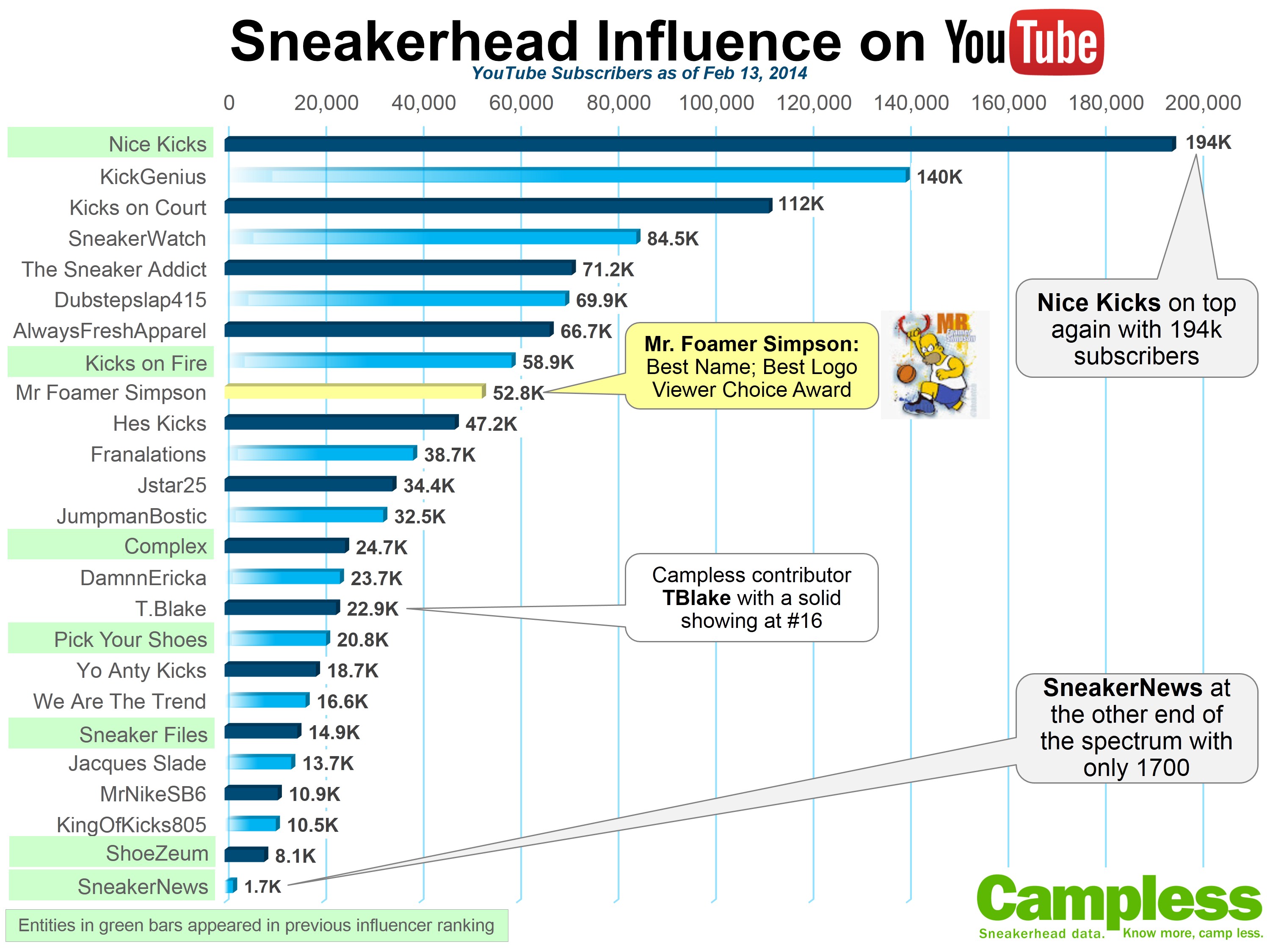 Did this list surprise you?  Who did we miss?