With the upcoming golf season approaching fast, we put together a comprehensive guide to assist you in purchasing your next pair of Jordan Golf shoes.

With the upcoming golf season approaching fast, we put together a comprehensive guide to assist you in purchasing your next pair of Jordan Golf shoes.

This article is part 7 of 33 in the series: StockX Buyer's Guides

Jordan Brand was born from basketball, but today it is far more than its basketball shoes. Their athletes compete at the highest level of competition in a variety of sports, and Jordan has expanded their product lines to accommodate the demands of competing at those levels. From baseball and football cleats to boxing shoes, Jordan’s focus on innovative performance products has made the brand a powerhouse in many competitive settings. Of all the different sports Jordan has supported, one particular line stands out for its uniqueness and fast-growing popularity, plus its origins are deeply tied to one of MJ’s favorite past times: Jordan Golf shoes. 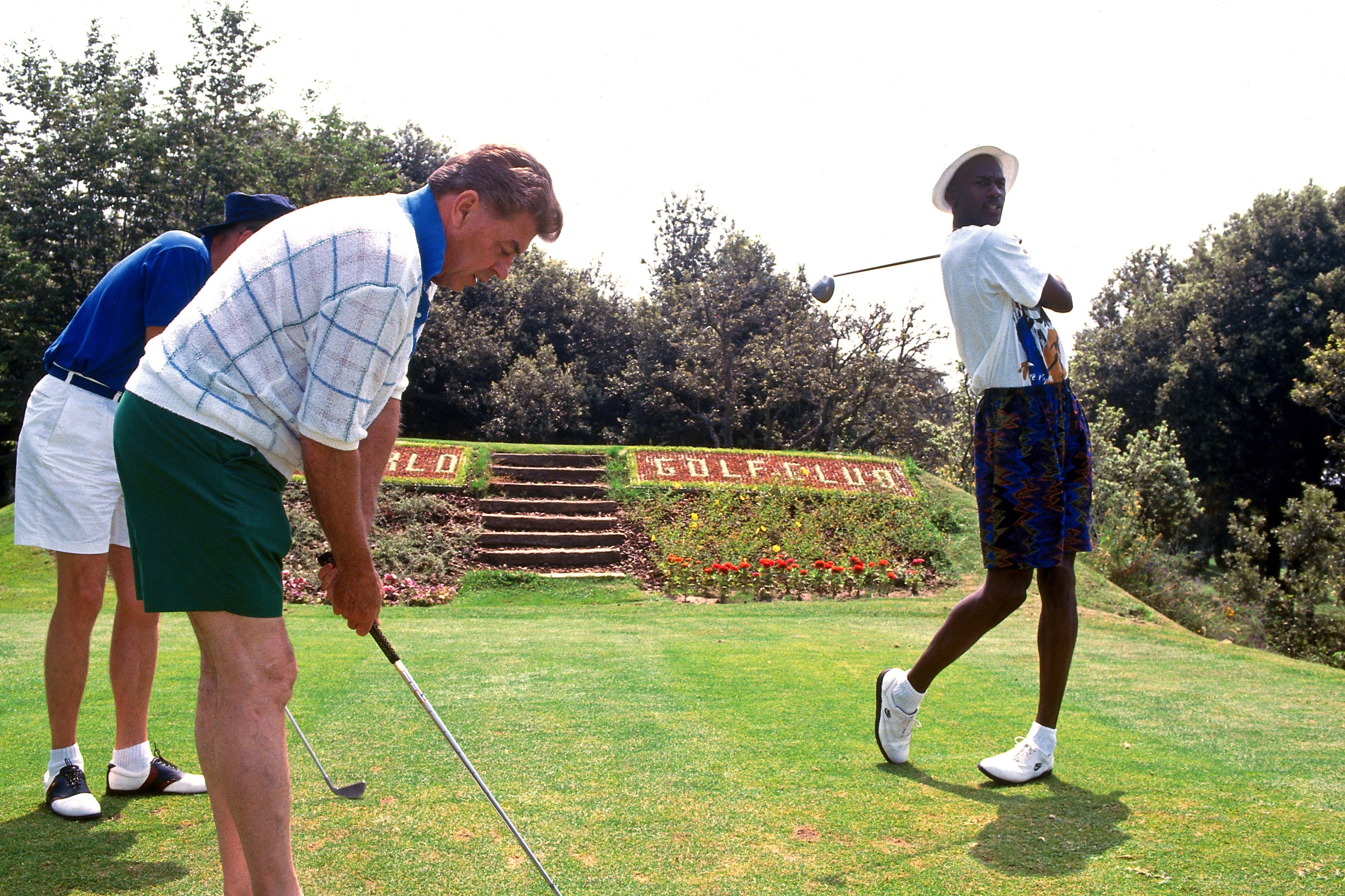 If you watched ESPN’s The Last Dance docuseries, you know that Michael Jordan loves golf. Whether it was playing 36 holes in Barcelona before the 1992 Olympic games with the Dream Team, or pulling up to celebrity tournaments in custom Jumpman golf carts, or even having his wedding reception on the driving range at Jack Nicklaus’ golf course, golf has played a central role in Jordan’s life and mythos. It only makes sense that Jordan Brand makes golf shoes as a way of celebrating MJ’s love for the fairways.

With golf shoes not as publicized as Jordan basketball shoes, there isn’t much information readily available for buyers to understand the ins and outs of Jordan Golf shoes. Until now. With the upcoming golf season approaching fast, we put together a comprehensive guide to assist you in purchasing your next pair of Jordan Golf shoes.

Michael Jordan was first introduced to golf after his final college basketball season in 1984. In an interview with PGA Tour News, Jordan’s college roommate and teammate Buzz Peterson explained that both his and MJ’s golf journies began when Peterson met fellow student Davis Love III, a golf team member for the University of North Carolina, in chemistry class. After class one day, Love asked Peterson if he had ever golfed before (he hadn’t), and invited him to hit some balls. When leaving his apartment to head to the course, Peterson asked MJ if he wanted to join and MJ agreed. 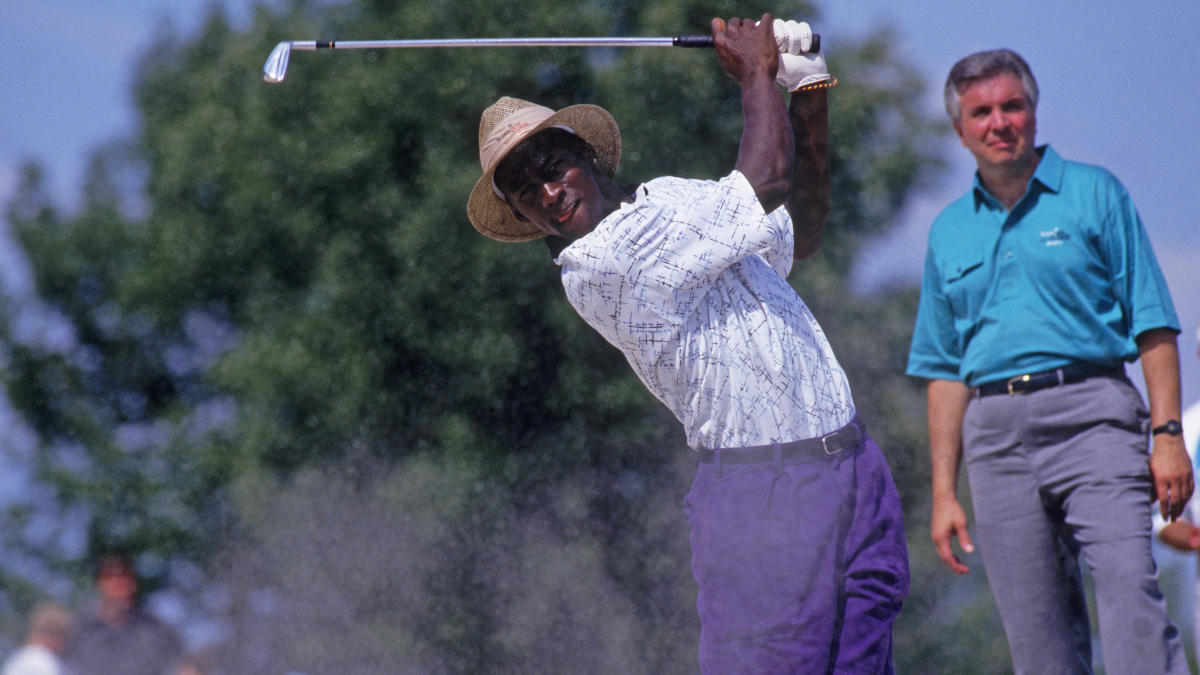 Photo by Focus on Sport via Getty Images

At first, Jordan would just drive the cart around and hang out with the golfers. But over time, his famously competitive nature kicked in and he began to play. Jordan started off hitting drives and putts, and eventually worked his way into playing full rounds, although he wasn’t that good. Peterson recounts that in Jordan’s first full round, he shot bogey (over Par) on all but one hole. Here, as with countless other Michael Jordan stories, a familiar narrative emerges: when there is something MJ isn’t the best at, he will practice until he is. Michael Jordan has played golf ever since.

The History of Jordan Golf Shoes 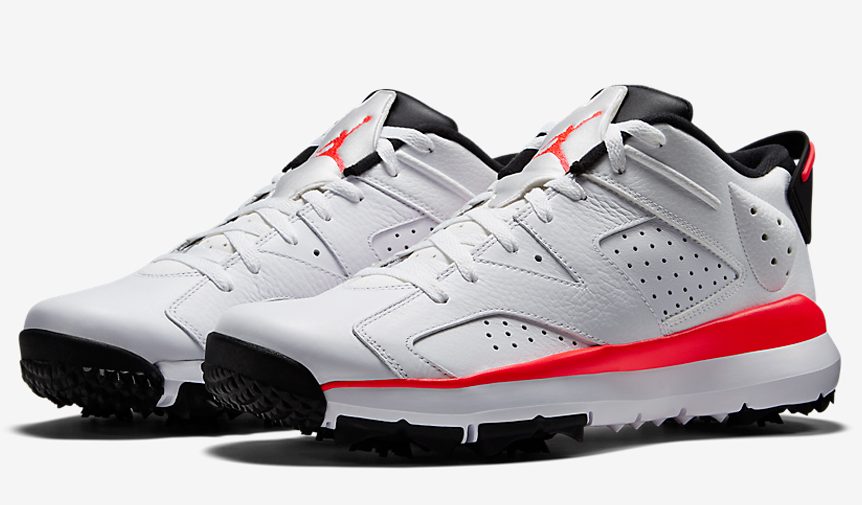 Although Jordan’s love for golf dates back to the mid-80s, it wasn’t until 2015 that Jordan Brand started releasing golf shoes to the general public. The first Jordan Golf shoe to debut was the Air Jordan 6 Retro Golf Cleat Infrared. The design modified the classic Jordan 6 White Infrared model specifically for golf by adding a cleated sole for better grip on the fairways. Since then, many Jordan Retro models have received the golf cleat treatment. From Jordan 1s to 5s, and even 11s, there is now an expansive collection of Jordan Retros that are prime for a round of 18.

How Much Do Jordan Golf Shoes Cost?

Like Jordan Basketball shoes, Jordan Golf shoes are highly coveted and hard to obtain at the retail level. If you are able to purchase a pair before they sell out, Jordan Golf shoes cost between $150 and $225. In most cases, Jordan Golf cleats sell out, leaving the true market price in the hands of buyers and sellers. Jordan Golf shoes now sell at an average resale price of $290 on StockX. But these prices vary significantly by model, with different Jordan golf silhouettes garnering very different levels of demand. 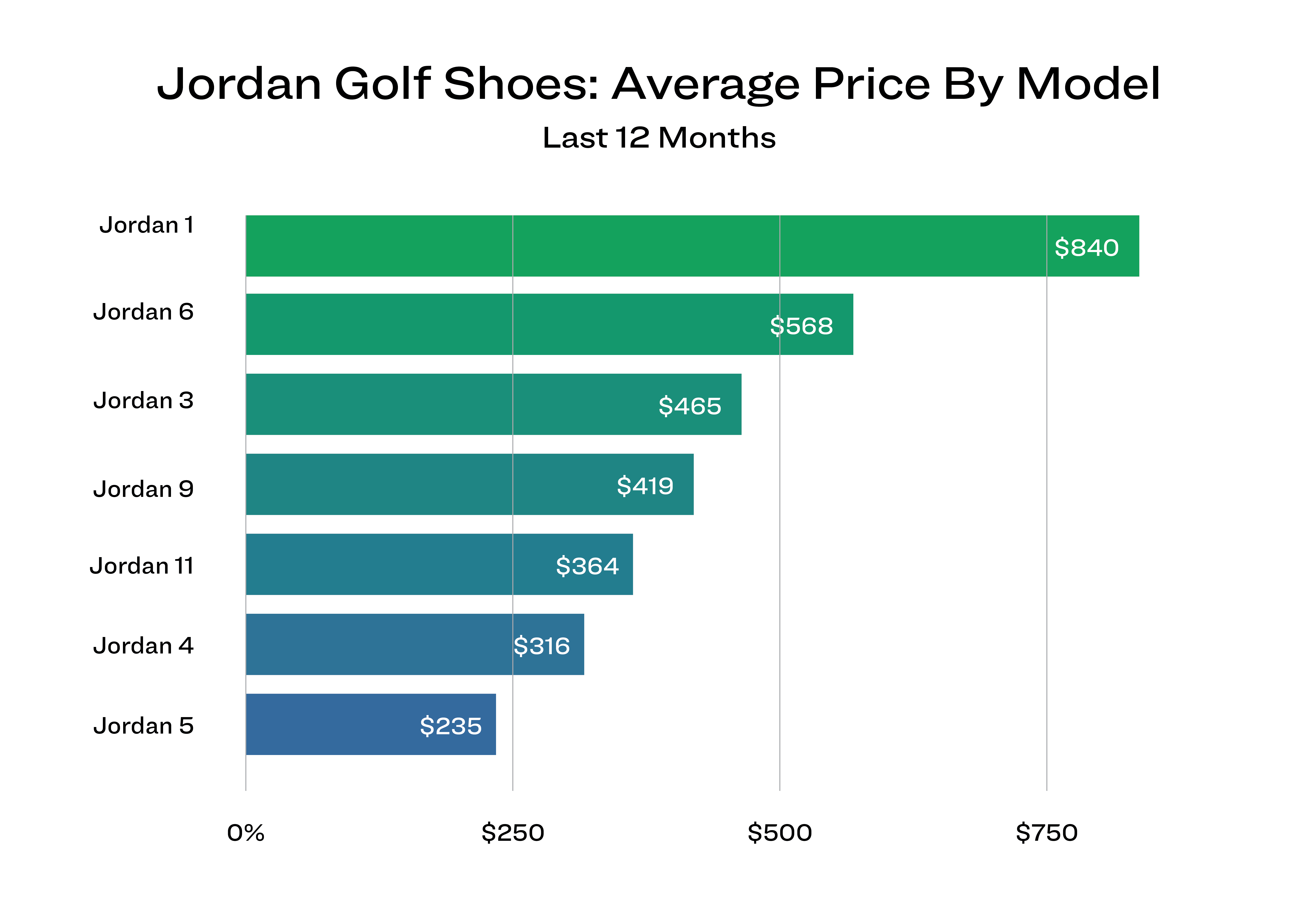 The chart above shows the average resale price for Jordan Golf shoe models in the last 12 months. At the top of the chart, Air Jordan 1 Golf shoes are by far the most valuable silhouette in the Jordan Golf catalog, trading on StockX for a whopping $840 on average. The astronomical price of the Jordan 1 Golf model is largely driven by the resale value of one release in particular: the Jordan 1 High Golf Cleat Chicago. The Jordan 1 High Golf Cleat Chicago has sold for an average of $1,350 in the last 12 months, becoming the most expensive Jordan Golf release in StockX history.

While resale prices for Jordan Golf shoes are relatively high across the catalog, there are more affordable options for buyers who are looking to get into a pair for the best prices possible. The Jordan 5 Golf is the most affordable retro silhouette in Jordan’s Golf collection. With an average resale price of $235, it tends to trade for just a bit over retail, making it more accessible than most models. If you are looking to get even more bang for your buck, retro or not, the Jordan AD3 Golf is a popular performance golf cleat that sells for under $200. No matter your budget, there is always a Jordan Golf shoe that hits the mark.

Demand for Jordan Golf shoes is at an all-time high. March 2021 was a record month on StockX, with more trades of Jordan Golf shoes than any other month in the platform’s history, and Q1 trades are up 50% compared to the previous quarter. The weather is warming, and after a year of lockdowns, the desire to get outside and onto the fairways grows each day. At the same time, it’s not just golfers who are participating in the market. For collectors and investors, Jordan Golf shoes have proven to be a profitable venture – with classic colorways of the Jordan 1 fetching four-digit resale values. Also, with most releases featuring removable spikes, Jordan Golf shoes are a burgeoning fashion trend off of the course. Taken together, all of these points suggest that Jordan Golf demand will only continue to grow stronger in the months ahead. Whether it’s first-time buyers looking to cop their first pair, or long-time fans hoping to complete their collection, now is the perfect time to buy.