Is Bad Bunny the Next King of Collabs?

We crunched the numbers to find out why Bad Bunny has the potential to be the next biggest musician in the collaboration market. Find out more below.

We crunched the numbers to find out why Bad Bunny has the potential to be the next biggest musician in the collaboration market. Find out more below.

This article is part 13 of 17 in the series: By The Numbers

We live in a culture of cross-pollination. The forces of technology and globalization have broken down cultural boundaries, and the diverse currents of fashion, music, art, and design intersect at a dizzying pace. In the field of sneakers, collaboration has become the primary driver of style and hype. Pairing diverse and divergent cultural perspectives to create new forms, collaboration is both a metaphor for our cultural era and its purest form of expression.

The reggaeton artist is only three shoe collaborations deep and has already inspired stratospheric levels of demand. From instant sell-outs to sky-high resale premiums, the hype surrounding anything he touches is almost unfathomable given how new Bad Bunny is the collaboration game.

Claiming that Bad Bunny has the potential to attain the same collab greatness as Kanye West, Travis Scott, Pharrell, or Virgil Abloh may sound preposterous considering his relative newness. But looking closely at our sneaker price data, there is a surprisingly strong case that he’s on his way.

Here is why Bad Bunny may be the next king of collabs.

When you look at the biggest collabs trading on StockX and the level of demand they inspire, it’s difficult to argue that Bad Bunny is royalty in the sneaker collab market right now. For example, the Air Jordan 1 High Travis Scott is currently trading for $2000, and prices are rising each day. But, if we look at the impact Bad Bunny has made in his first sneaker collaboration, and compare it to other artists’ debut performance in the past five years, it shows he is actually ahead at this stage in his collaboration career. 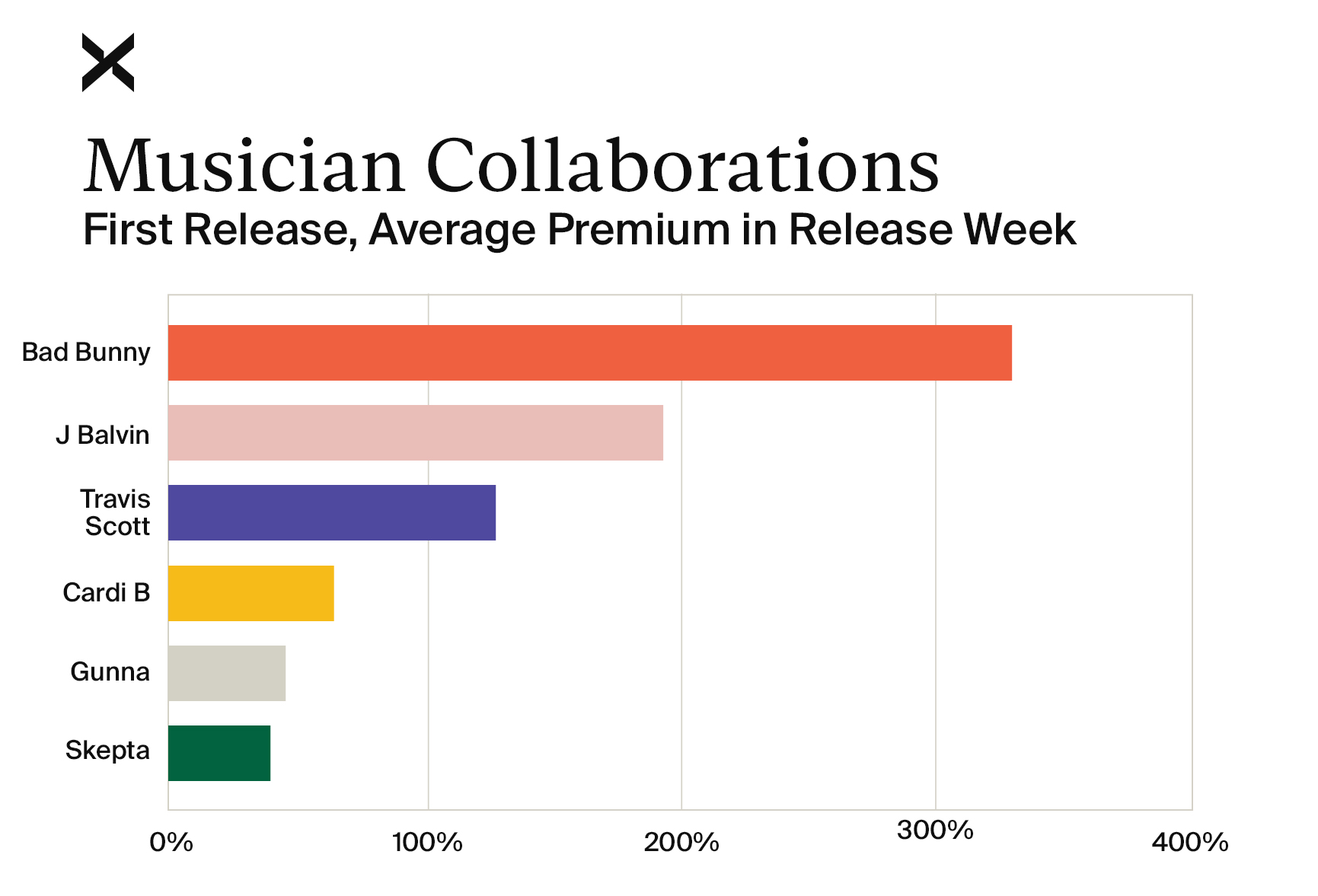 The chart above shows the average release week premiums for debut musician sneaker collabs in the last five years. For this analysis, each release had to be the musician’s first sneaker collab. We also excluded releases that utilized brand new silhouettes, like Jaden Smith’s New Balance Vision Racer and Rihanna’s Puma Creeper. This allows us to isolate the impact of the artist alone, by measuring how much their contribution boosted prices relative to previous versions of the same sneaker model.

In the last five years, the adidas Forum Low Bad Bunny posted the highest release week premium for a debut artist collab on StockX. With a price premium of 330%, the Bad Bunny collab is far ahead of its closest rivals, all of which debuted with premiums under 200%. You’d have to go all the way back to the pre-StockX era, to Kanye and Pharrell, to find a debut performance this strong. Even debut collabs featuring the likes of superstars like Travis Scott and J Balvin had never accomplished that feat.

While the Air Force 1 Travis Scott AF100 has averaged a premium of just under 900% in the past year, it wasn’t as valuable when it first released in 2017. In its first week on the market, the Travis Scott AF100 only reached a premium of 127% in its first week on StockX. The growth in value alone shows how far Travis Scott’s impact on resale has come in the past four years. Some could argue that Travis’ impact on the AF1 would have been larger if they had released post-Astro World, the album that delivered his first number one record and expanded his fanbase. But at the same stage in the sneaker collab market, Bad Bunny has Travis Scott beat.

Bad Bunny’s early-career success in the field of footwear is amazing, unlike anything we’ve seen in the last five years, and could be the set up for something big, new, and exciting! Maybe even something like what we saw with Kanye West. But when you consider the type of shoes he’s worked on, his secondary market performance becomes even more mind-boggling.

Take the example of J Balvin, whose debut footwear collab came in the form of a Jordan 1. You’ll remember from the chart above that the Air Jordan 1 High J Balvin boasted the second-highest release-week premium in our sample of debut collabs, clocking in at just under 200%. A sneaker flipping for 3x retail is impressive in any situation. But given the past resale performance of Jordan 1s, the shoe already had a whole lot going for it.

In Q1 of 2021, we found that the average Air Jordan 1 High resells for more than double its resale value. This means that a J Balvin collaboration only boosted the resale value of the Jordan 1 silhouette by around 70%.

The impact of Bad Bunny on the adidas Forum was far larger, which is plainly evident when you compare it to the average Forum release: 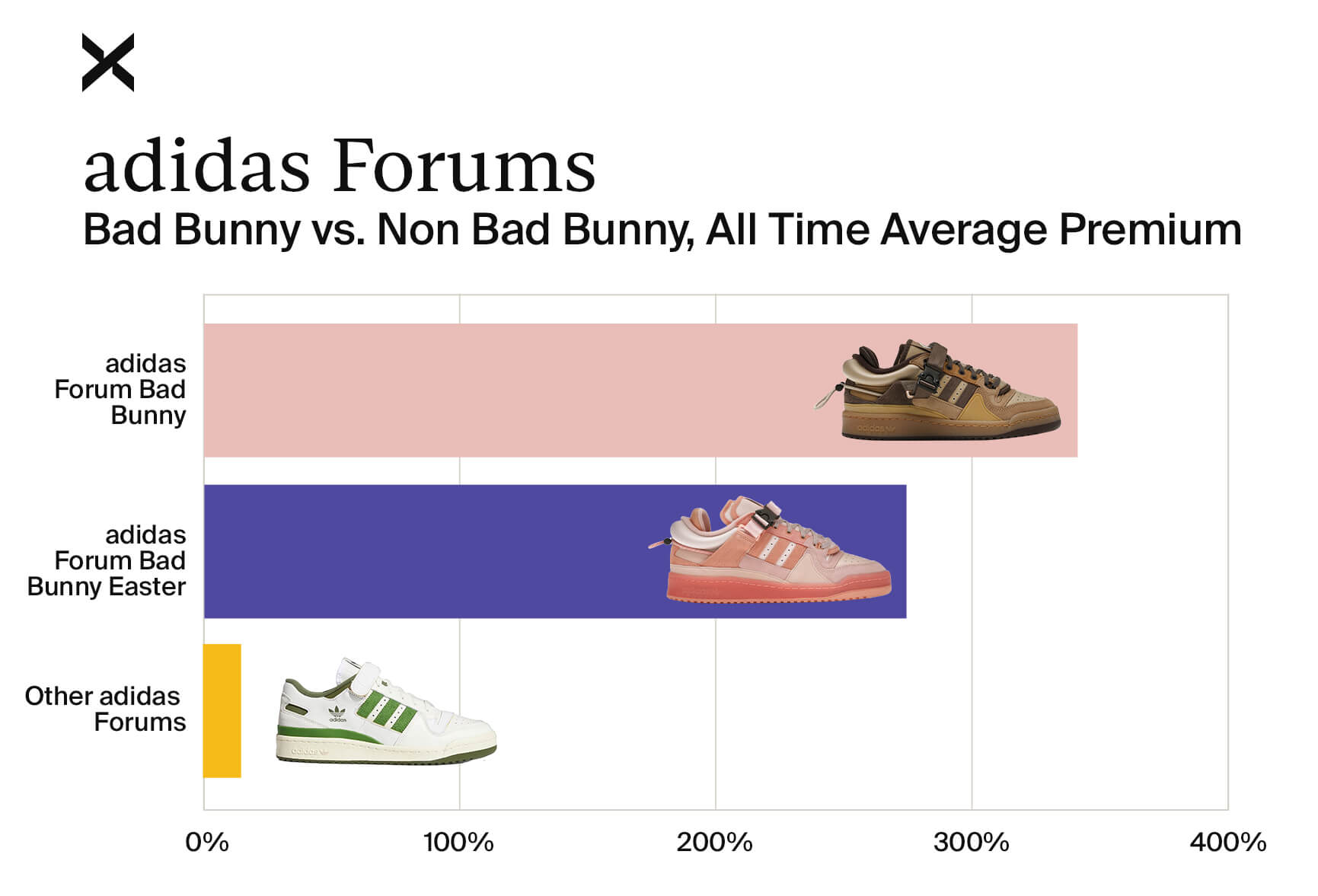 The Forum is one of adidas’ most well-known retro basketball models, with its roots dating back to the 80s. But despite its standing as a classic in the Three Stripes catalog, it has never shown any major movement in the secondary market. Outside of the Bad Bunny releases, the average adidas Forum only holds a 16% resale premium.

By contrast, both Bad Bunny Forums have maintained price sky-high premiums since their release, making them the most expensive adidas Forums in StockX history. Compared to the average Forum, with its 16% resale premium, Bad Bunny’s two colorways boosted premiums by 15-20x. . When you compare that to what J Balvin or even Travis Scott has done with the already-hype Jordan 1 silhouette, the size of the effect isn’t even close.

King of the Crocs

To truly reach royalty status in the market of musician collabs, one must have a broad influence, regardless of the product. We have seen greats like Kanye West, Pharrell, and Travis Scott prove their impact on markets outside of sneakers. Bad Bunny’s influence on resale is also prevalent outside of sneakers. Looking at our numbers, he recently made resale history with his first collaboration with Crocs.

Over the past year, Crocs has partnered with a number of artists, from a diverse array of musical genres, to create unique models of their signature sandals. The chart above shows the most expensive of these collaborative Crocs. Once again, Bad Bunny is far ahead of the pack. 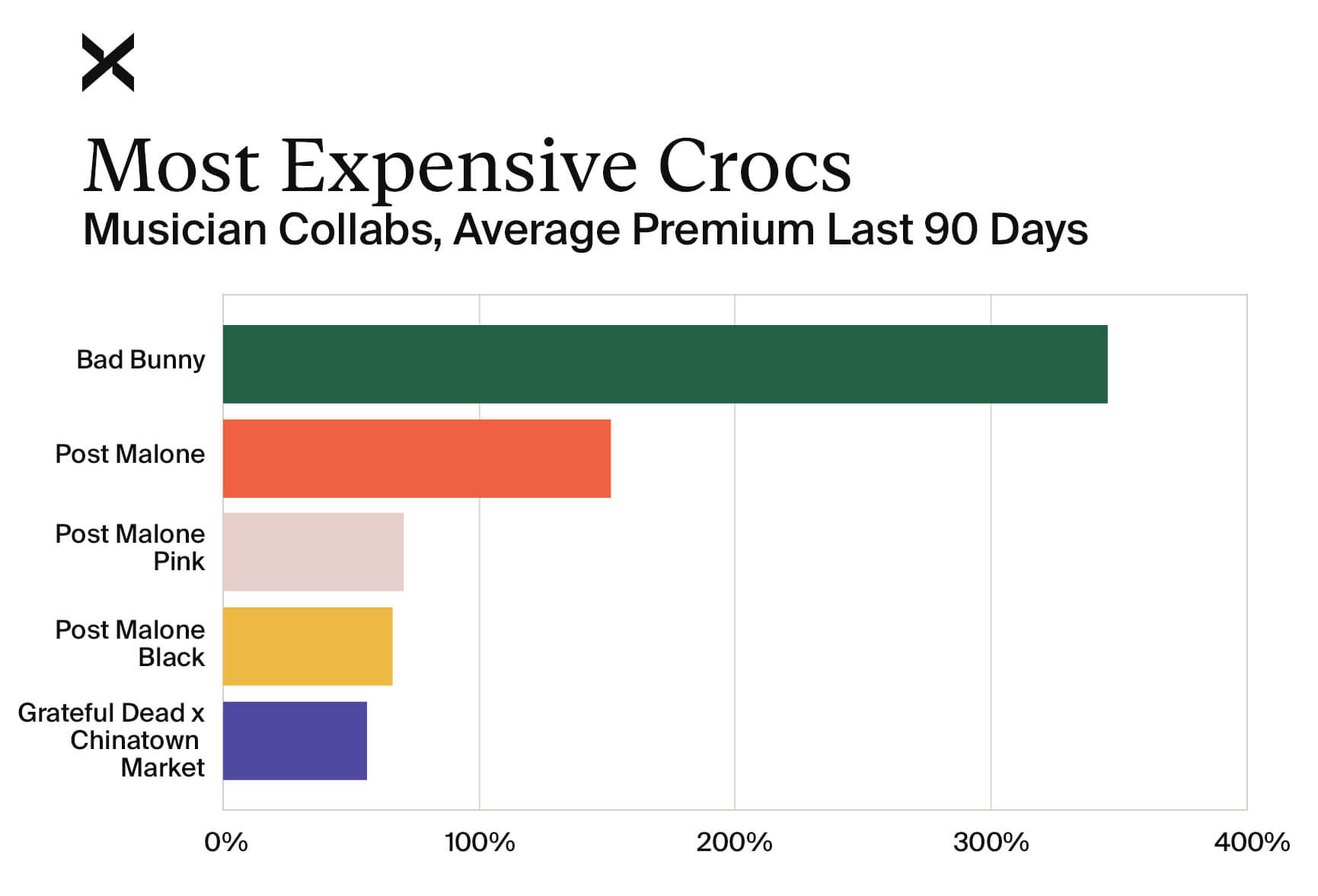 In the last 90 days, the Crocs Classic Clog Bad Bunny has sold at a 346% premium, almost 4.5x retail price. The next most valuable musician collab was the Crocs Duet Max Clog Post Malone, with a premium right above 150%. By any other standard, a pair of Crocs trading for 150% above retail would be incredibly impressive. But Post Malone’s performance is absolutely dwarfed by that of Bad Bunny.

It’s too early in Bad Bunny’s history to tell if he is next in line to become the king of collabs. Right now, most observers would still award that title to Travis Scott, whose brand sends shockwaves through any market he enters (even alcoholic seltzers!). But, at this stage in his career, it’s apparent that Bad Bunny is ahead of where most musicians were in the resale market after their first series of sneaker collaborations. With more time and plenty of releases on the way, we will see if the Bad Bunny hype is built to last. Seven Things You May Not Know About the Jordan 1

Seven Things You May Not Know About the Jordan 1