This article is part 86 of 98 in the series: StockX Pick Of The Week There’s not a single name in streetwear that compares to Supreme. It might have originally started in 1994 as a skateboarding brand, but it has become universally synonymous with youth and forward culture, and as of recently is a $1B company. Supreme sells a lot – from box logo sweatshirts to hand axes and knives – but what’s actually popular? What Supreme stuff sells for above retail, and what do they make the most of? Fear not: The StockX Buyer’s Guide is here to help.

The History of Supreme: Skateboarding to Louis Vuitton

James Jebbia started with one humble store in New York City’s SoHo neighborhood in 1994 (on Lafayette street, and it hasn’t moved FYI) – it was a skate shop that was supposed to be just “cool” (his words). The company has always been methodical and steady: they didn’t even release a website until 2006. But slow and steady can win the race – Supreme now boasts stores across the world (11 total locations), and finally opened up a second New York location in Brooklyn in late 2017. 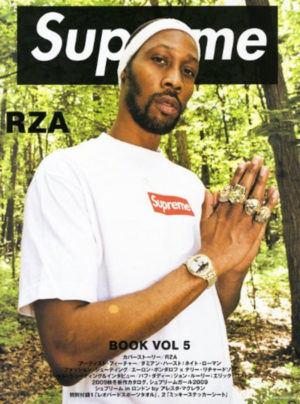 When you look at how Supreme has grown and changed as a brand, two major areas stand out: their signature collaborations and the type of stuff that they sell.

Over time, Supreme has tacked on some pretty big name collabs: they’ve worked with the likes of Louis Vuitton, The North Face, and Nike, to name a few. The sheer variety of types of companies they’ve worked with – from high luxury to everyman style – speaks to the wide appeal of what they’re selling. In his popular expose on the brand, Hasan Minhaj points to this bridging of streetwear and high luxury as one of the hallmarks of the new streetwear era.

Looking at the kind of stuff that Supreme sells is also an interesting view into the evolution of the brand. They originally started with skater items – sweatshirts, trucks and skate tools, and the like – but have expanded to include a diverse (and sometimes bizarre) array of accessories and apparel. Their brick – which didn’t brick at all – is a classic example that skeptics use to paint the brand as silly, but they’ve also sold hand axes, exercise mats, kayaks, and tennis balls. That sheer variety makes one thing clear: Supreme is selling a brand, not a product. But when it comes to profitability, not all Supreme items are created equal.

People tend to talk about Supreme as a whole as a brand where things sell for a lot above retail, but that’s not entirely true: most of Supreme’s reputation for high aftermarket prices are specifically for box logo items. While the majority of Supreme releases sell for well above their retail prices, the box logo items are what truly dominate.

Average Retail Multiples: Box Logo vs. Everything Else

Box logo items – specifically apparel – are the core of Supreme’s aesthetic, and it’s the kind of design that the company started out with back in ‘94. Splitting box logo items across categories, it’s t-shirts that tend to bring the best returns: they sell for 12.9x their retail price on average, compared to a 2.2x average multiple for all types of Supreme tees.

It’s hard to understate how impressive a 12.9x retail multiple is – Supreme has been making box logo t-shirts for decades, and all of them have done well. This is likely the most consistent and highest premium we’ve seen for any item type – from any brand – at StockX.

Supreme has sold all different types of apparel: pants, tees, sweatshirts, jackets, hats, you name it – and here’s how they stack up.

Crewnecks and Sweatshirts have the highest average selling price for Supreme apparel, which is no surprise: the box logo sweatshirts frequently sell for more than a grand, like this Black Box Logo Hoodie. Non-box logo stuff in this category is usually much more reasonable, like this Chenille Hoodie or the good old Shears Sweatshirt.

T-shirts are the most popular selling Supreme apparel category on StockX: new graphic tees release several times a season, and on the low end they retail for $30 to $50 -a pretty accessible price point. After tees, Accessories (see Part 2) and Tops / Sweatshirts are the next most popular categories.

Because of some outliers in the box logo category and their low initial retail prices, Supreme tees have the highest average retail multiple (aka price premium) of all Supreme apparel on StockX. To help get a sense of which items sell for significantly above retail across categories, check out the bubble chart below.

(This chart shows the top 15 most profitable Supreme items in each category. The size of the bubble corresponds to the size of the resale multiple. The data reflects all StockX sales between October 2017 and April 2019)

When you take a look at individual items, Supreme has pulled of some pretty impressive stuff over the years.

Definitely one of Supreme’s more outlandish products, this figurine is the result of their collab with European porcelain maker Meissen, and it’s selling for around $8K on StockX at the time of writing. This isn’t the only item they’ve retailed for more than a grand: Supreme has also sold a Fender Strat, a few Rimowa suitcases ($1,600-$1,800), some Vanson jackets ($1,338), and The North Face Nuptse Jacket ($1,098). Off of StockX, some one off Supreme items can get really insane, like their pinball machine, which might cost you $50K or more. 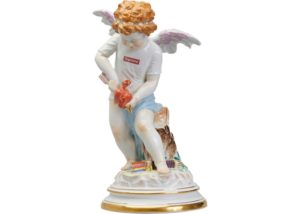 Shoulder bags have made an (inexplicable) entrance into streetwear – potentially because they’re deliberately ironic – and Supreme is leading the charge. Supreme has also released fanny packs (remember those, dad?) in their recent seasons. Next most popular? Supreme’s red collab with Zippo, and their black Hanes briefs.

The top 6 Supreme items when it comes to average retail premium are all the same thing in different colorways – the 20th anniversary box logo tee (shown here in white). They go anywhere from 27x to 45x retail, which undoubtedly seals this collection as one of the most valuable (relative to retail) ever.

Apparel vs. sneakers is a whole discussion in of itself, but an interesting point to note about these Supreme items is that their value doesn’t immediately tank after release. The 20th-anniversary collection is too rare to analyze well over time, but a typical box logo release – like the Black Crewneck (FW18) – tends to keep its resale price steady over the first few months. Consider the following chart:

Given all of this impressive data, the single most asked question about this iconic brand is why. What makes Supreme so popular that people are willing to spend hundreds of dollars on an average-quality t-shirt? It’s easy to laugh at what seems like wasteful and self-serving style, but like any art, streetwear is community-first and will always look silly to outsiders. At its core, it’s just a group of people expressing themselves and sharing experiences. And along the way, a great deal of value is created – for collectors and resellers alike.

That’s all for this edition of our Buyer’s Guide. Keep an eye out for Part 2: Accessories and Sneakers coming in the next few weeks.