Back in September we published a few posts (here and here) about the ShoeZeum liquidation, including tracking its sales by month and comparing the proceeds of those sales to both the $550k offer that Rick Harrison made on Pawn Stars and Jordy Geller’s $1 million asking price.  Last week ago we wrote a post tracking against Rick’s offer through September, as well as the ShoeZeum’s top 5 sales from May 2013. 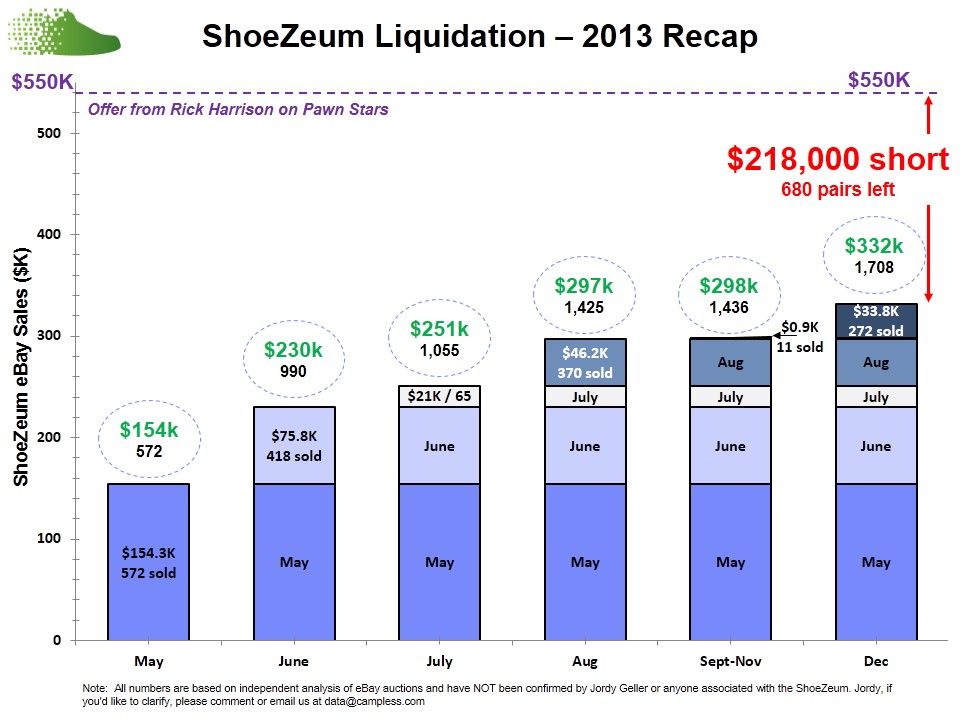 This chart shows monthly sales (dollars and pairs) for the entire liquidation.  At the top of each bar are the cumulative totals, and the purple line across the top shows the $550k goal.  As you can clearly see, the ShoeZeum is currently $218k short, with only 680 pairs left to sell.

On a per pair basis, Jordy is going the wrong direction:

When we reported stats through September, the average price per pair was $208 and he needed to average $264 a pair to hit $550k.  Now he needs to average 22% more per pair!  A quick look at the monthly price per pair and we can see the cause of the dip:

May and June were nice, averaging $270 and $325, respectively.  But six months were less than $130!  There were so few sold from September-November (11) that we won’t even worry about them.  August and December, however, both had very high volume (370, 272) and very low average price ($125, $124).  Not sure if Jordy was giving away Christmas presents or what, but there were some good deals being shipped from Vegas those months.

At this rate it seems highly unlikely that the ShoeZeum can course correct and start averaging north of $300 per pair when its only done it once before.  Of course, maybe Jordy is holding back all the real heat for the end and come February he’ll start rolling off Mags, Yeezys, DBs and PEs like no one’s business.  We hope he does – what great data that’ll be!

Have you bought anything from the ShoeZeum?