Odd Future And Their Love For Supreme

In an era where both brands found mainstream stardom simultaneously, we looked at the key moments where Odd Future put Supreme on a global stage.

In an era where both brands found mainstream stardom simultaneously, we looked at the key moments where Odd Future put Supreme on a global stage.

Something really interesting was happening at the time when Odd Future became the internet’s most popular troublemakers. The internet and its presence in our lives grew, social media and social sharing shot through the stratosphere. Internet-based sharing platforms created windows that anyone, anywhere could look through and be in another place, living vicariously through someone else. Pitchfork’s 2018 article, “Found Family: How Odd Future Changed Everything” details how the group exploited their newfound power that existed in sharing platforms like Twitter, Youtube, Vine (RIP), and eventually Instagram. Acting as something like the first internet influencers, Odd Future put the brand Supreme on a stage it had never seen before, or as Pitchfork puts it “Streetwear brands, namely Supreme, were revitalized with their co-signs.”

Whether or not Supreme’s massive growth since 2010 is to be credited 100% to Odd Future, it’s undeniable they’ve had an impact on the brand’s trajectory in some way. Recently, Jaden Smith spoke with GQ, specifically stating that he “never cared about Supreme until Tyler, The Creator”. Similarly, Dazed is quoted stating “Tyler was patient zero in bringing the cult brand a devout following.” In the same vein, the Odd Future gang themselves have come to acknowledge the roll they’ve played, stating several times in several songs (AM // Radio, What The Fuck Right Now (Remix)) that they’re the reason people are wearing the brand. Read further into the two cultural juggernauts intertwined history below.

A Quick History of Supreme and Odd Future’s Relationship 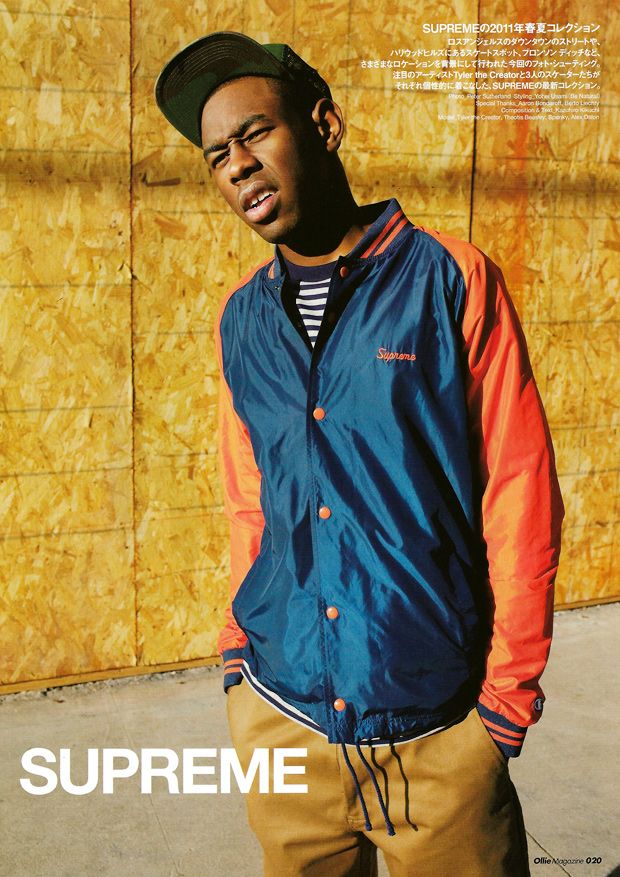 Tyler, The Creator modeling for Supreme in Ollie Editorial Lookbook.

In 2011, when the Yonkers video went live, Supreme was 17 years old and Tyler, The Creator was 20. Only three years older than the brand, Tyler and the Odd Future Crew were the perfect example of what it looked like to grow up watching and participating in the cultural ethos Supreme tries to exude. Larry Clark was quoted as calling Supreme like “Kids” in real life and Jebbia defined it as a type of clubhouse in a feature with the New York Times. This was in the 90’s in NY without the internet. Fifteen to twenty years later, in LA, the same thing took place for the Odd Future guys, but with the internet at their disposal.

“New Preme shit got me feeling flyer than a bag of bees” – Tyler, The Creator on Slater

Supreme and Odd Future’s intersection happened in a way that can only be described as organic. Before Fairfax was the “Streetwear Mecca” it is today, it was just a quiet neighborhood and as Tyler states in an interview with GQ, Supreme was the only store in the area that sold skateboards at the time. As the Odd Future crew frequented the store, a relationship between them and Supreme developed naturally. Angsty and edgy, Odd Future was seemingly the living embodiment of Supreme in the late 2000’s and early 2010’s. Supreme took the collective under their wing and the relationship developed quickly, leading to Supreme eventually giving them free clothes. In 2011, Tyler would model in a lookbook for Supreme, shot by Ollie Magazine. As the group gained popularity, they’d soon become something like walking billboards for the brand, putting them on display on some of the highest stages imaginable.

Odd Future In Supreme At The MTV Music Video Awards

Until 2011, Odd Future was still relatively underground. Instagram was one year old and social sharing platforms were still finding their legs. On February 10th, 2011 though, things changed for the west coast rap collective when Tyler, The Creator dropped the music video to his breakout single, Yonkers. The video went viral, gaining him the attention of Hip Hop’s highest, with both Kanye West and Pusha-T cosigning Tyler less than two weeks after the music video dropped. The video received praise outside of just Hip Hop as well, gaining him a spot on Time Magazine’s Top Ten Everything of 2011 list and was named “Best New Track” by Pitchfork. Soon after all of this, he would be invited to the 2011 VMA’s where he’d win best new artist, beating out Foster The People, Kreayshawn, Big Sean and Chris Brown, and Wiz Khalifa. Tyler’s accomplishments in 2011 were achieved while wearing his favorite brand. In the Yonkers video, he can be seen wearing a Supreme Camp Cap and subsequently, he can be seen wearing one during his attendance of the VMA Ceremony as well.

If 2011 was the year that Odd Future really blew up, 2012 was the year they showed they were here to stay, at least for a little while. After the VMA, Odd Future had the eyes on them that they needed to take things to the next level. Tyler’s “Goblin” was blowing up and achieved a number one spot on the Billboard 100 in 2011 and 2012 came with a slew of guest performances, including one on The Jimmy Fallon Show with Odd Future cohort, Hodgy Beats. The two performed “Sandwitches” off Goblin, Tyler wearing a white and red Supreme Box Logo hoodie, marking yet another instance where he’d put the brand in front of millions of eyes.

Odd Future In Supreme On SNL

Another piece of the puzzle that was Odd Future’s huge 2012 was Frank Ocean’s release of his debut album, Channel Orange. Not only did the album hit number one but it would go on to win him a Grammy in 2013. Prior to his Grammy win and appearance came a feature on Saturday Night Live as the musical guest. Frank opted to perform two of the album’s hits, “Thinkin’ Bout You” and “Pyramids”. Both were met with rave reviews as people would go on to wonder where that Frank was during his performance at the Grammys. His choice of costume for his SNL performances came from Supreme’s archives as Frank wore a Supreme Thunderbird Hockey Jersey released in the late 2000’s, further expanding the brand’s reach. Frank’s performance at the 2013 Grammys was widely considered to be representative of his entire night at the ceremony. Nominated for six awards, he took home two (just one for Channel Orange, another for his feature on “No Church In The Wild”), and the performance itself was lackluster.

“A real ninja with the blade and the mask,
Got them gold ninja stars and red Supreme nunchuks” – Frank Ocean on She 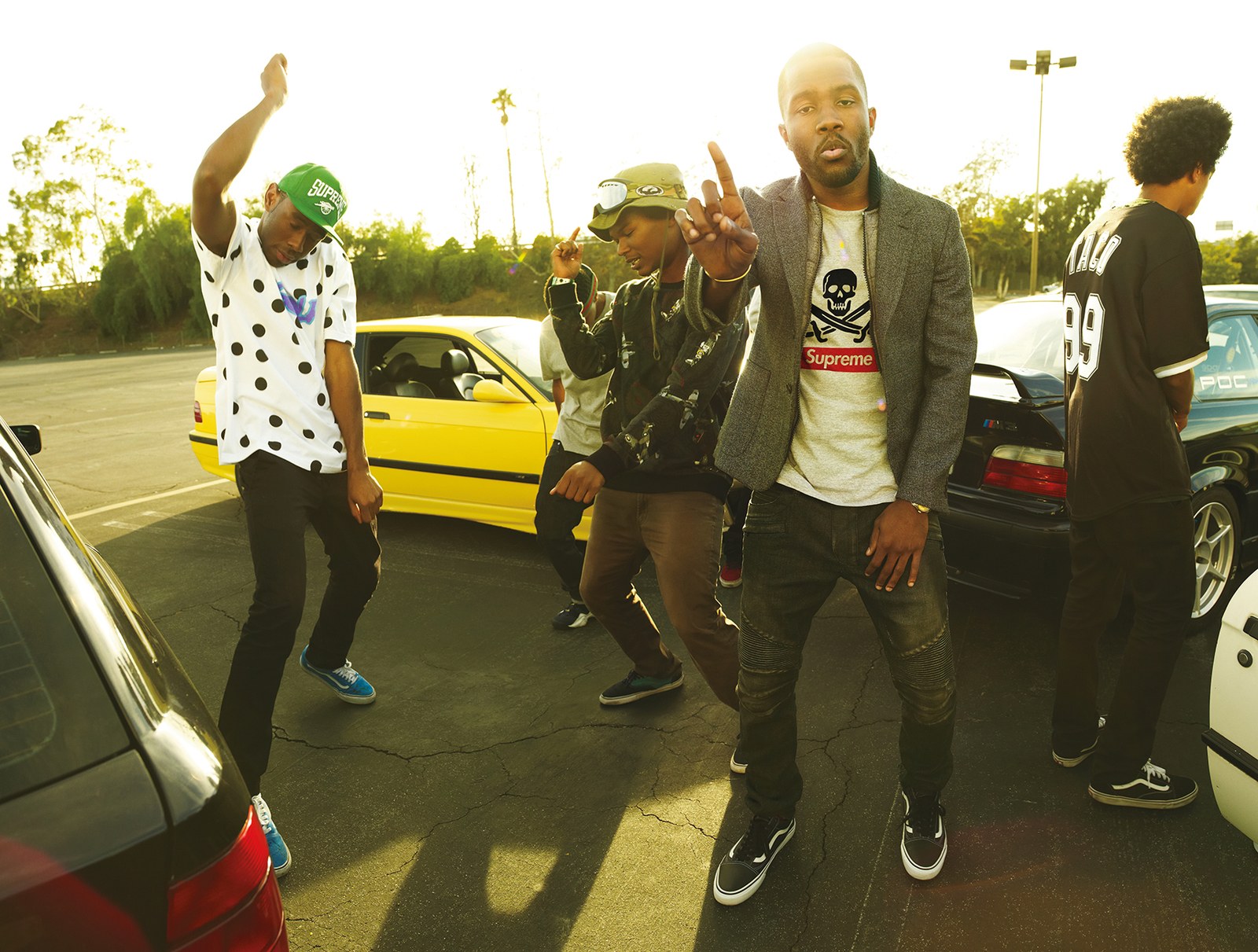 In their 2015 piece, Complex details some of what happened as Odd Future fell from the seat of authority they held in 2012 and 2013. As the key members split off and started doing their own things, their personalities and the way they promoted themselves did the same. What was once colorful and lighthearted in Earl Sweatshirt, became dark and a little more minimalist. Where Supreme was once Tyler’s go to, the brand eventually gave way to his own brand Golf, which he almost exclusively wore for years. Frank on the other hand, went into hiding in totality, not really emerging into the public eye between the years 2013 and 2016.

The group may no longer be the activists they used to be for Supreme, but their 3-5 year season of evangelism can be heavily attributed to Supreme’s popularity since then. Looking back, Odd Future’s rise alongside of Supreme was a perfect partnership. For Supreme, it provided them a platform to attain the global domination they currently assert. For Odd Future, it provided them yet another perfect outlet for expression, whether it was high taste or purposefully wearing hoodies and bucket hats on red carpets.