From sales trends to colorway valuation, we crunched our numbers to uncover why the Air Jordan 11 Cool Grey could potentially be the biggest sneaker release of 2021.

From sales trends to colorway valuation, we crunched our numbers to uncover why the Air Jordan 11 Cool Grey could potentially be the biggest sneaker release of 2021.

This article is part 19 of 17 in the series: By The Numbers

It’s been over a decade since the Air Jordan 11 Cool Grey hit shelves. It was first released in 2001 as one of the first non-OG Jordan 11 colorways (meaning the colorway did not release along with the silhouette in 1996), and then it was re-issued in 2010 during the first peak of Air Jordan mania. Now, during a time when Air Jordan demand is at a historical high, it is coming back from its hiatus and poised to set records at StockX.

We crunched our numbers and found evidence why this year’s holiday Jordan 11 release could make history – not just for Jordan Brand but the entire sneaker market. From sales trends to colorway valuation, we uncovered why this release should have your full attention this holiday season.

Here is why the Air Jordan 11 Cool Grey (2021) has a chance to be the biggest Jordan release of 2021 and one of the biggest sneaker releases in history. 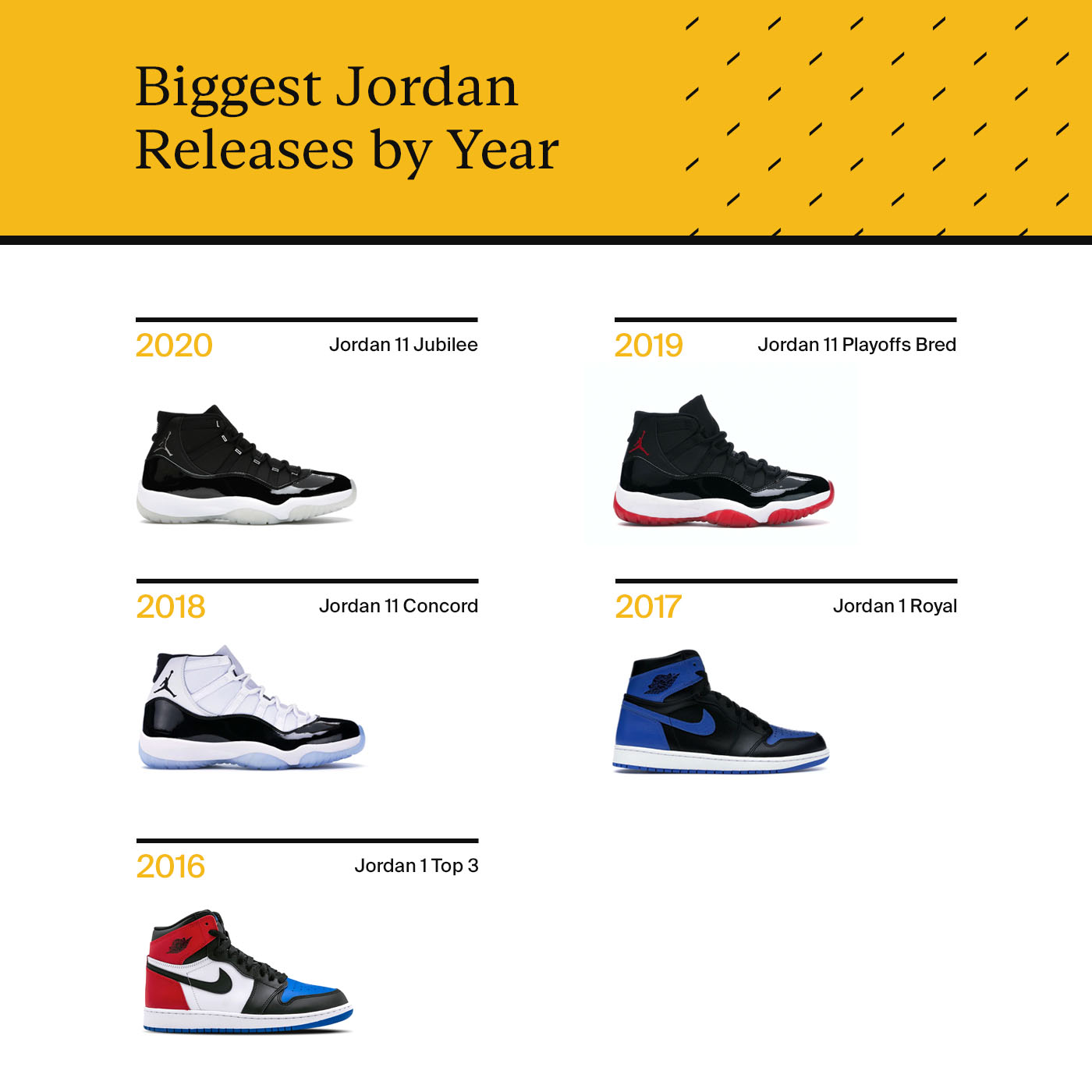 Today, it’s common to see massive demand around Jordan 11s that release during the holiday season. Last year’s Air Jordan 11 Jubilee became the biggest Jordan release in StockX history, and the year before, the Jordan 11 Playoff held the same status. Despite an impressive track record in recent years, it wasn’t always that way. In fact, there was a time when Jordan 1s outsold holiday Jordan 11s.

In StockX’s early years, Jordan 1s reigned supreme as the biggest Jordan releases. Three of the top five biggest Jordan releases in 2016 were Air Jordan 1s, and each release made up more than 30% of total sneaker trades on their respective release days, a remarkably high percentage for a single sneaker. The same phenomenon occurred in 2017, when the Air Jordan 1 Royal hit record-setting sales numbers, making up more than 50% of the total sneaker market on its release day.

Air Jordan 1s dominated the market not because there was an absence of holiday Jordan 11s. In fact, they competed against some of the most renowned Jordan 11 colorways in the Jumpman catalog. The cult classic Air Jordan 11 Space Jam was re-issued in 2016, as were valuable colorways like the Win Like 96 and Win Like 82 in 2017. Regardless of which holiday Jordan 11 surfaced, Jordan 1s attracted the most release day demand.

Then, starting in the holiday season of 2018, the tides reversed. Holiday Air Jordan 11s climbed to the top of the leader board and it has been that way for three years straight. Starting with the Air Jordan 11 Concord in 2018, holiday Jordan 11s have stormed the market every year, routinely setting release day and 12-month sales records on StockX. If this trend continues into 2021, the Air Jordan 11 Cool Grey has a good chance to become the biggest release in StockX history.

OGs Aren’t The Most Valuable

There is a historical moment that can be tied to every OG Jordan 11 colorway. The Concord marks MJ’s return to the hardwood, the Legend Blue represents his dominance over the NBA’s biggest stars, and the Bred signifies reclaiming his throne by winning his fourth title.

While the nostalgic value and historical significance of the original Jordan 11 colorways are immense, surprisingly, the OG colorways are not the most valuable from an investment standpoint. 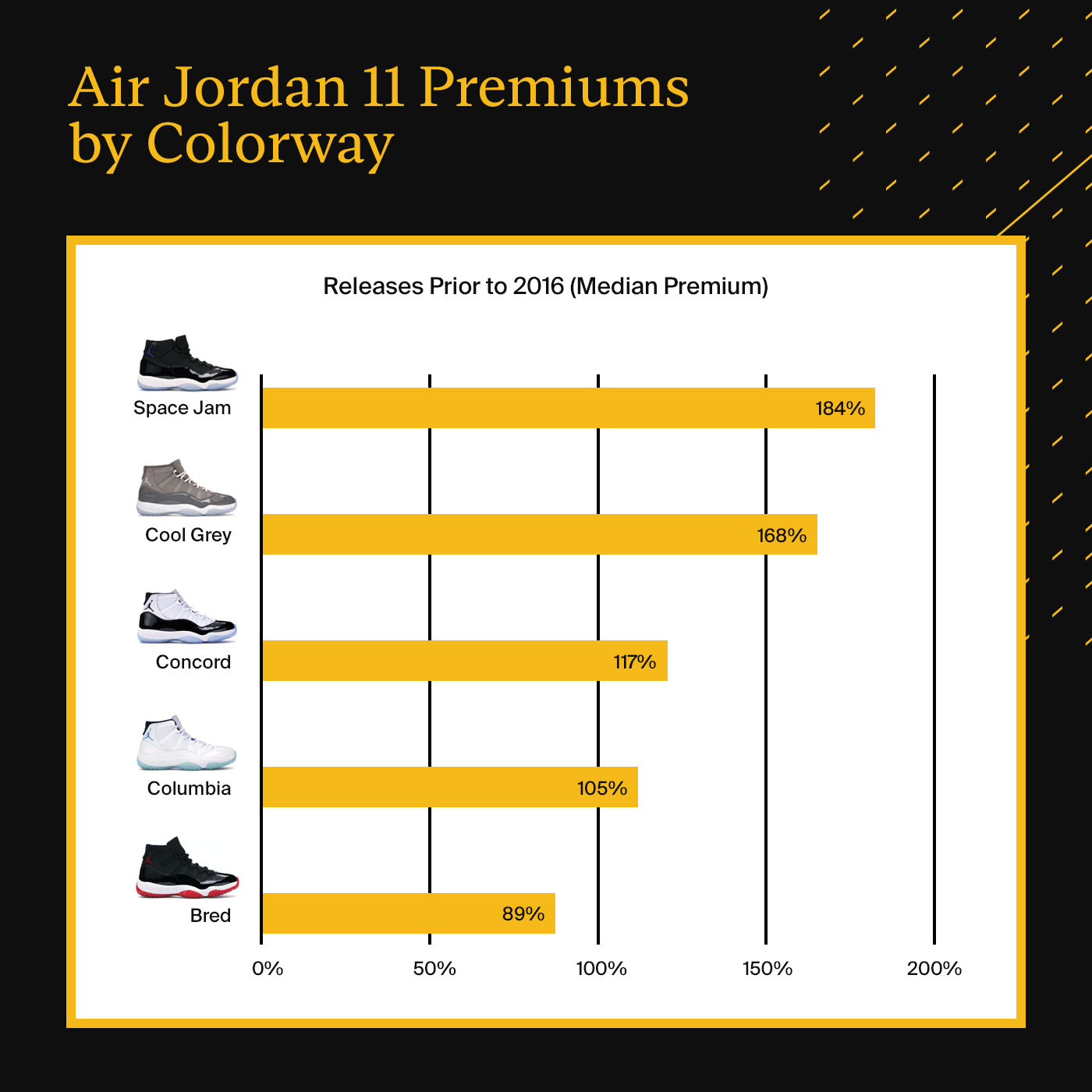 The chart above shows the median sales premiums for Air Jordan 11s by colorway. To analyze how each colorway has performed over time, we looked at prevalent Jordan 11 colorways that were released at least twice before StockX launched in 2016, that way true deadstock value would not be undermined by recent releases.

According to our data, the two non-OG colorways – the Air Jordan 11 Space Jam and Cool Grey – have the highest price premium. Each colorway boasts a 150+% sales premium, or more than 1.5x its retail price. Compared to the OG colorways, there is a prominent gap in value that is hard to ignore. Even at a value more than twice its retail price, the most valuable OG Jordan 11 colorway, the Concord, was still more than 50% lower in median premium compared to the Cool Grey and Space Jam.

Obviously, fashion changes with time, and there’s no guarantee that certain colorways will remain popular forever. But the fact that the Cool Grey 11 has the second-highest median price premium – outranking even the beloved OG colorways – provides a pretty good indication of demand. If buyers are willing to pay nearly 170% above retail for the older Cool Grey colorways, you can bet that the 2021 holiday release will have plenty of hype.

All Eyes on Jordan

ESPN’s 2020 docuseries The Last Dance jumpstarted overall demand for Jordan 11s and Air Jordans. Within six months of the series premiere, the average price of Jordan 11s appreciated by 35%, and prices have continued to rise with increased demand. And the Cool Grey Jordan 11s? The effect of The Last Dance was even stronger. The price of Cool Grey 11s rose 60% in those six months between March and August of 2020.  With growing accessibility and populations of traders and consumers, we can expect the Jordan 11 Cool Grey to be at the top of many wishlists this holiday season. 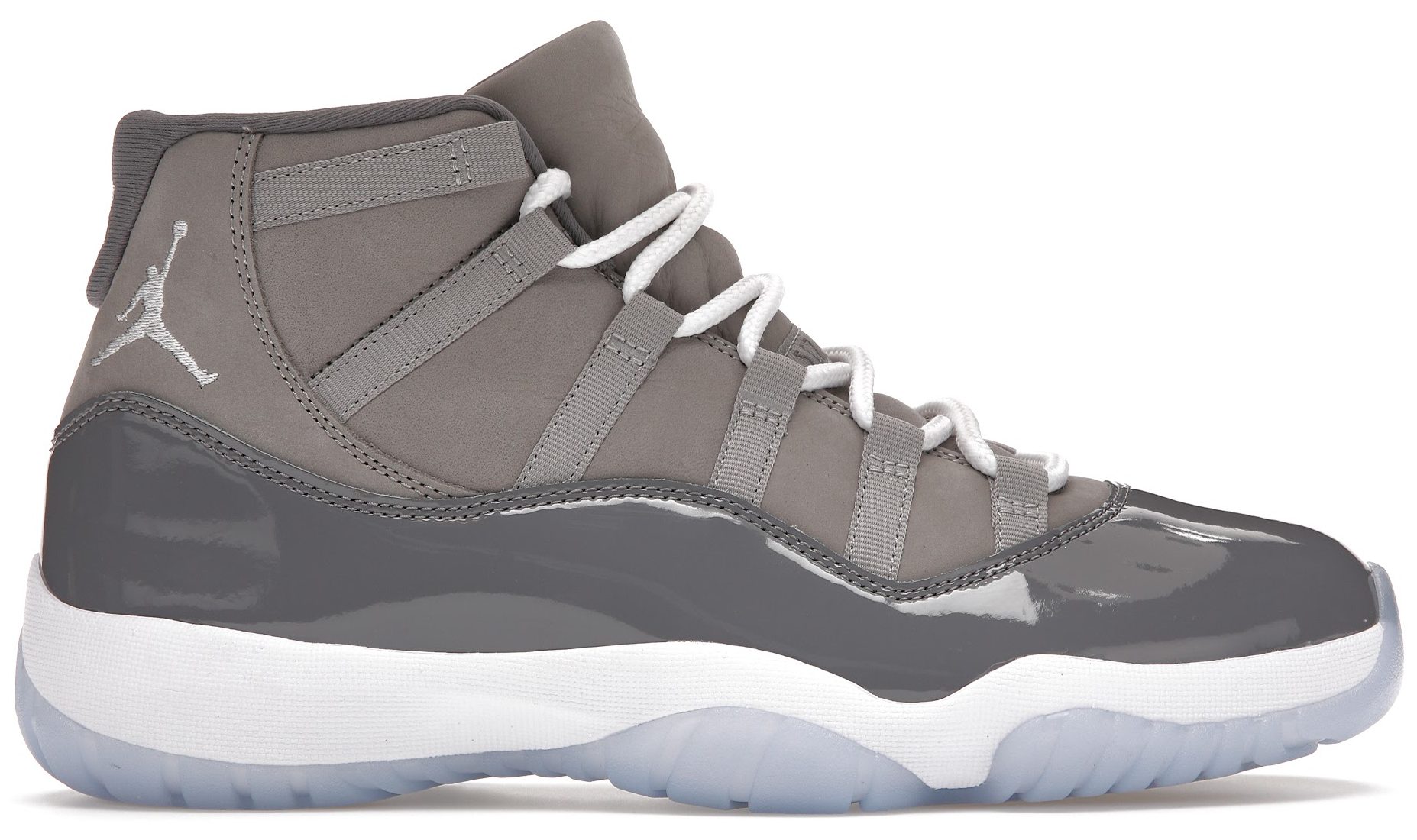 The Air Jordan 11 has been a focal point of some of the biggest sneaker moments in the holiday season. Since its debut in 1996, the model has finished off release calendars with a bang, and this year is no different with the re-emergence of the Cool Grey.

Based on our data, it is clear the Air Jordan 11 Cool Grey (2021) is in a position to make history as the biggest Jordan release in StockX history. A three-year trend of holiday Jordan 11s being each year’s biggest release, the growing value of Cool Grey 11s, and a surge in the Jordan 11 market all point to this year’s Cool Grey being the must-have release of 2021.

Whether you are planning to make a wise sneaker investment for the future or seizing the opportunity to grab a personal pair at a bargain price, the Air Jordan 11 Cool Grey deserves a top spot on your wishlist.