A throwback that pre-dates the trend.

A throwback that pre-dates the trend.

Longines resurrected a part of their history with the release of the Longines Legend Diver at the 2007 Baselworld. In doing so they proved to be well ahead of the curve on the vintage re-issue trend that’s emerged in recent years. The watch has taken a number of forms over the years and remains a staple of the Longines Heritage family, showing a remarkable staying power in a climate seemingly dominated by limited editions and FOMO driven releases. There are a few reasons for this, not least of which are based in the watches origins which, like many great dive watches around today, dates back to the ‘60s. 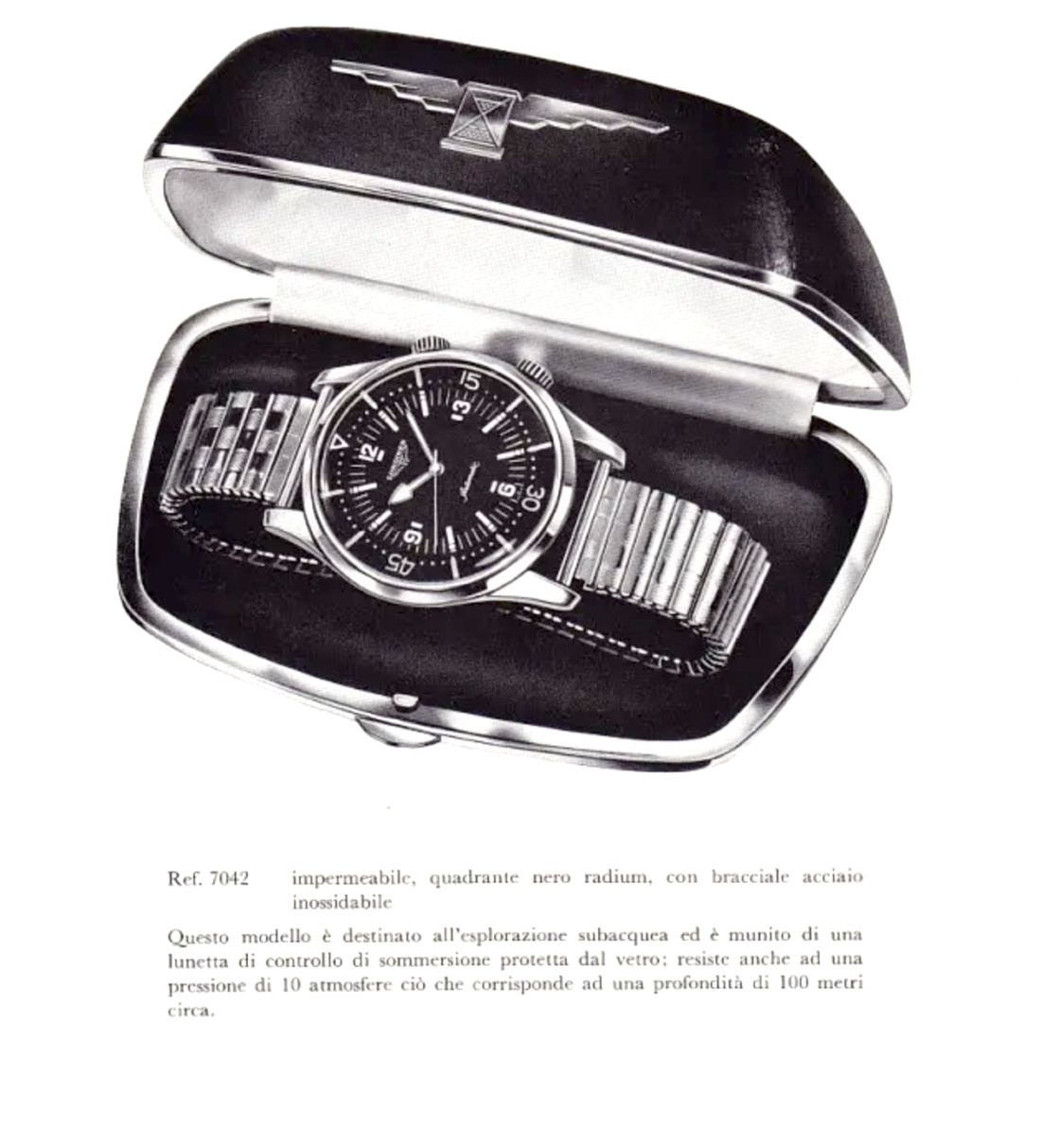 You’ve heard the story before, recreational diving boomed in the ‘50s thanks to the invention of the “aqualung” by Cousteau and Gagnan, and publications like Skin Diver Magazine advocating the sport. With the rise in popularity came the need for diving tools, from which were born the Rolex Submariner, DOXA Sub, Blancpain Fifty-Fathoms, and the Longines Skin Diver, to name but a few that are still around to this day. Tools like these have long since been replaced by dive computers on the wrists of divers, but the cultural relevance of these watches remains as strong today as it ever has been. 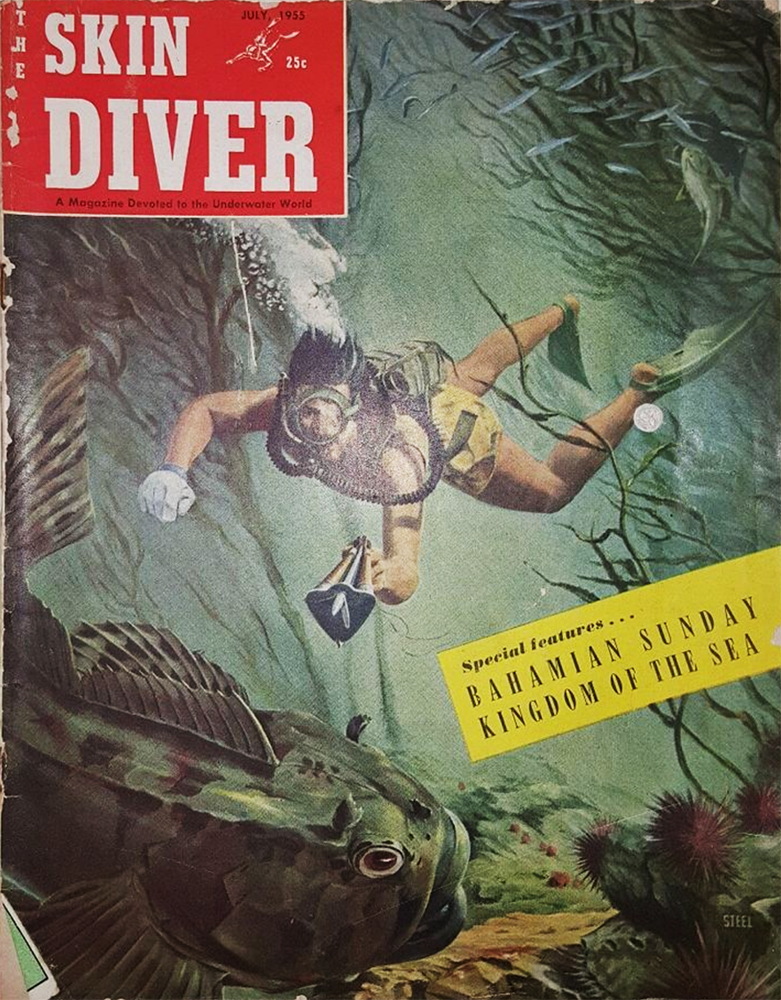 issue of the Skin Diver magazine, circa 1955

The Longines Nautilus Skin Diver proved a popular, accessible option for divers in the ‘50s, and in 1960 Longines followed up on it with the release of the reference 7042, which serves as the inspiration for the Longines Legend Diver (LDD) that we know and love today. The 7042 stood out for its Super Compressor style oversized (42mm!) case (check out this guide to Super Compressor cases from our friends at Worn & Wound), which moved the bezel to internal position, manipulated by a second crown at 2 o’clock. This was done to reduce the chances of accidentally altering the bezel setting while diving, thus potentially compromising rather important things like decompression stops. 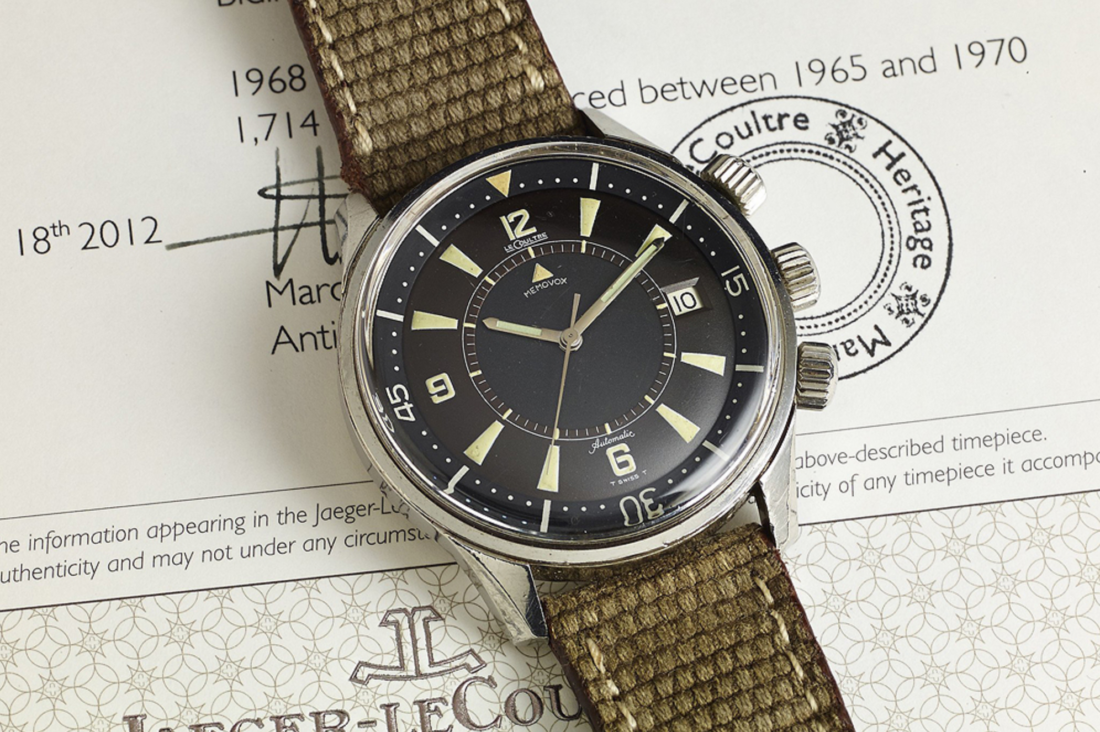 Internal bezels enjoy a niche popularity to this day thanks to watches like the IWC Aquatimer and Jaeger-LeCoultre Polaris. Their intended purpose as stated above serves as more of an annoyance in a modern setting, as many of us are no longer relying on them while actually diving. To access their functionality, a crown must now be unscrewed, manipulated, and screwed back in again. But hey, they look pretty cool, and let’s be honest, how many of us are actually using our rotating bezels that often anyways?

The latest iteration of the Legend Diver is the reference L3.674.4.50.6, which doesn’t exactly roll off the tongue as easy as LDD, as it’s known to enthusiasts these days. The re-issue of the 7042 has changed little since being introduced in 2007, and for good reason, it’s a faithful re-creation of the original, a modern evolution more than anything that gradually builds on the ‘60s era charm, right down to the Arabic numerals printed on the dial and the dimensions of the case. On that note, it’s worth pointing out just how unusual a 42mm watch would have been in the ‘60s. For reference, the Submariners of the era barely tipped 40mm and a gentleman’s dress watch like the Omega Constellation measured in at 35mm. But, moving the bezel to a position within the dial required the extra space, and the 42mm measurement of the ref 7042 is the same as you’d find on the JLC Polaris E859 of the same era. 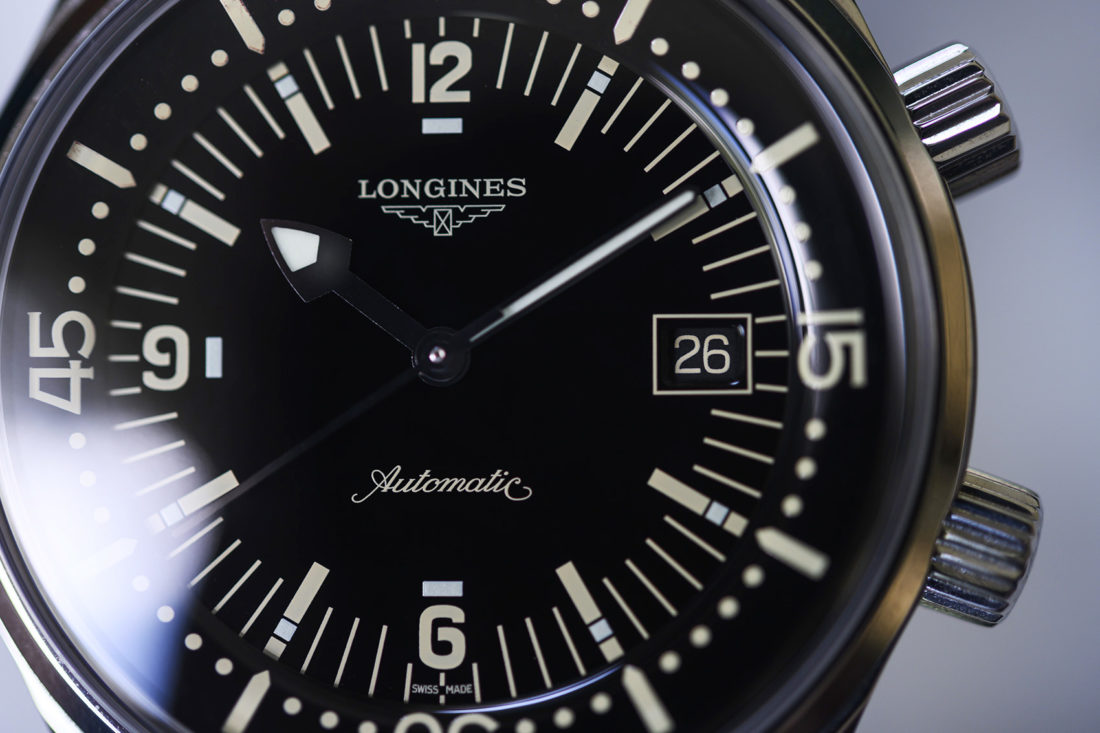 The LDD as available today is offered in either 42mm case or 36mm case, and in steel or black DLC coated. A dateless option was also available and are easily found on the pre-owned marketplace. We spent time with the 42mm option fitted with the steel mesh bracelet for max throwback feel. On the wrist, it’s reasonably comfortable, and you feel every bit of its 42mm diameter and 14mm thickness, for better or worse. 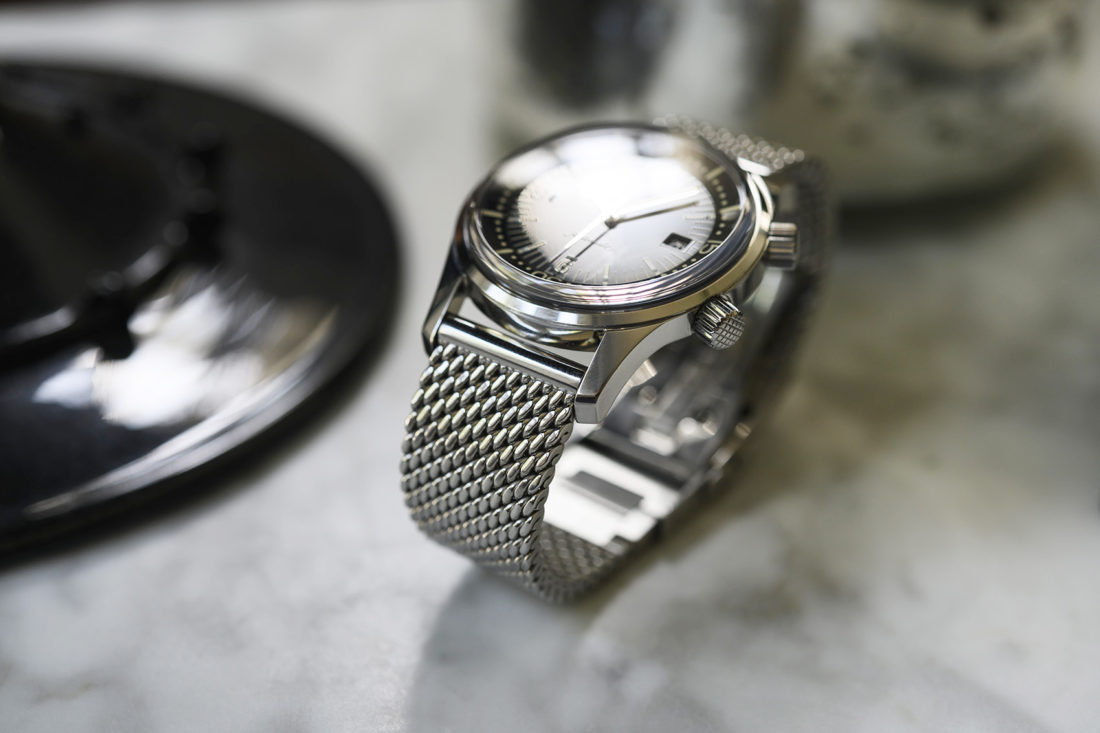 The case diameter isn’t the only reason for the notable wrist presence, though. For example the Omega Speedmaster is also 42mm in diameter, but thanks to a case that tucks in underneath the bezel and short lugs, it wears closer to a 40mm watch. The LDD on the other hand features a pronounced case edge that angles away from the crystal, and more importantly sports very long lugs. While lovely in their design, the lugs present a problem on the wrist, as they will hang over the confines of a 7 inch wrist, and the springbar holes are drilled mid way up their length, creating a bit of a horn poking out into the free air, embellishing their length. Additionally, the lug span measures 22mm, a noticable difference if you’re accustomed to 20mm straps and bracelets around your wrist. 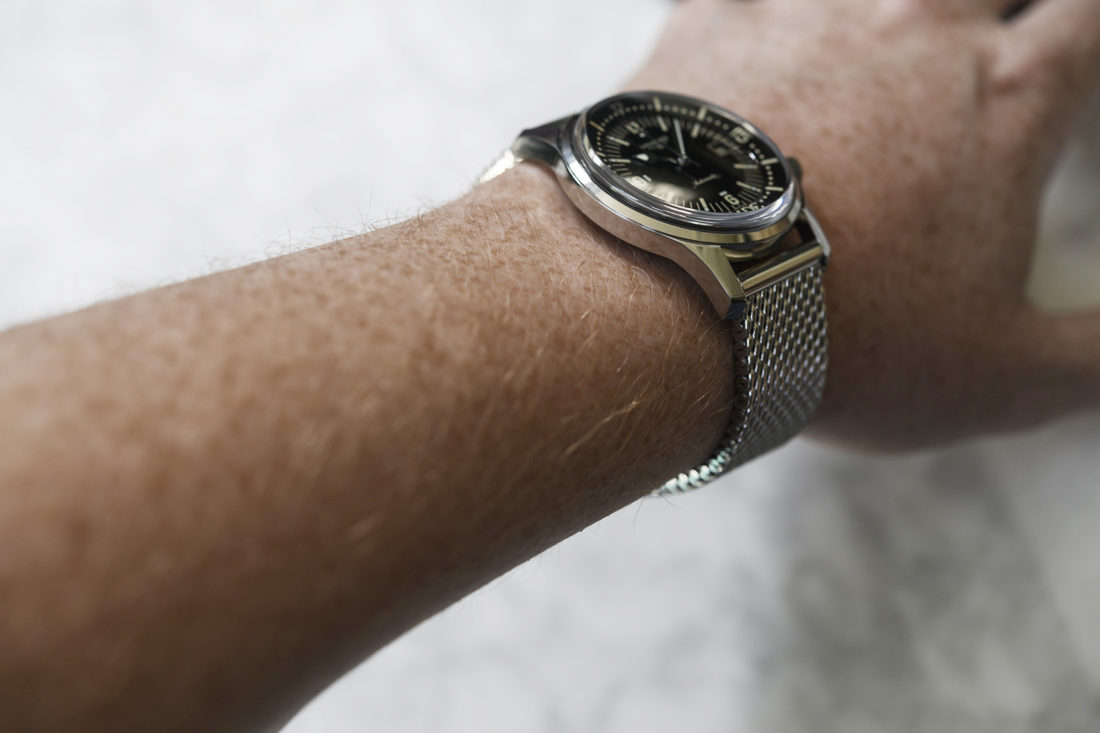 None of that should be too big an issue for those with slightly larger wrists or for those who prefer their watches on the larger size, but they should be noted before making a purchase decision. The rest of the case is fully polished, with two large crowns at 2 o’clock and 4 o’clock. The top crown adjusts the internal bezel, while the bottom handles winding and setting duties. Their ends feature the same cross hatching you’d find on models from the ‘60s. 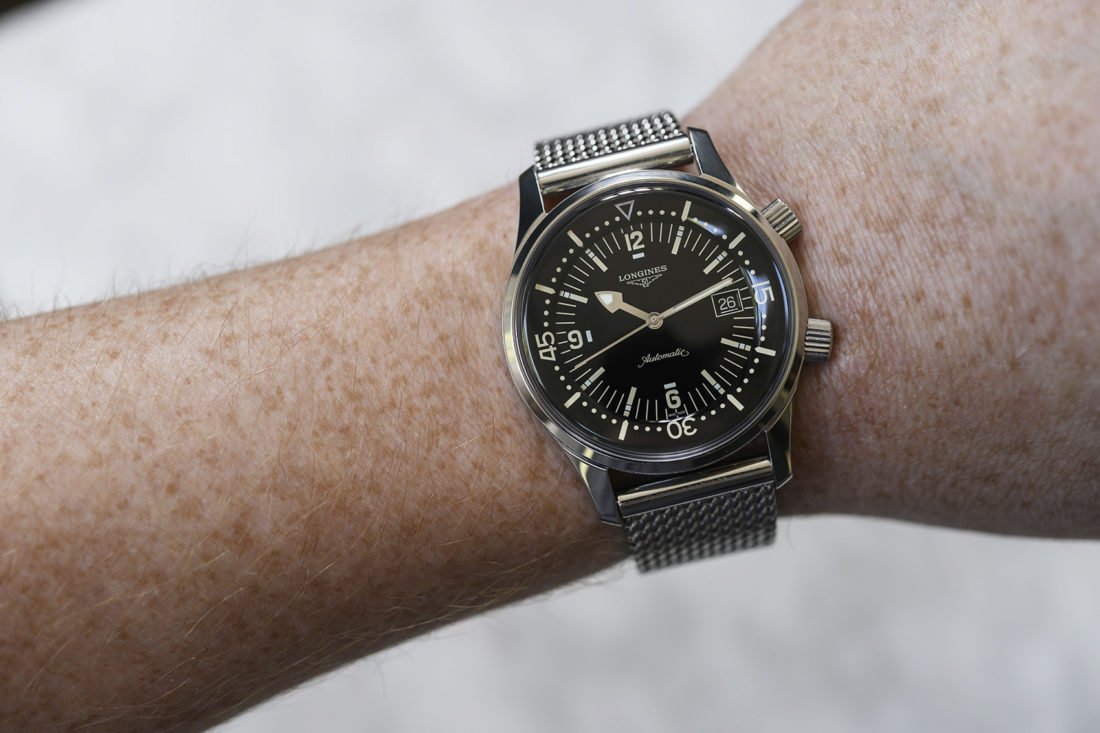 The dial of the LDD is what really sets this watch apart from its modern counterparts. There is little in the way of text, with the Longines logo at 12 o’clock, and a scripted “Automatic” at 6 o’clock. This leaves little left to interfere with the long minute hashes, which are present for all 60 minutes. The 5 minute hashes are more prominent, and hold a small amount of lume near their base. The Arabic numerals 6, 9, and 12 are applied and designed the same as you’d see on the ref 7042 from 1960. The original placed small lume dots at the outer edges of the numerals, while the LDD uses lume hashes. The “6” and “9” are the same shape, and with the hashes in close proximity make for an odd reading experience, but nothing that prohibits usability. 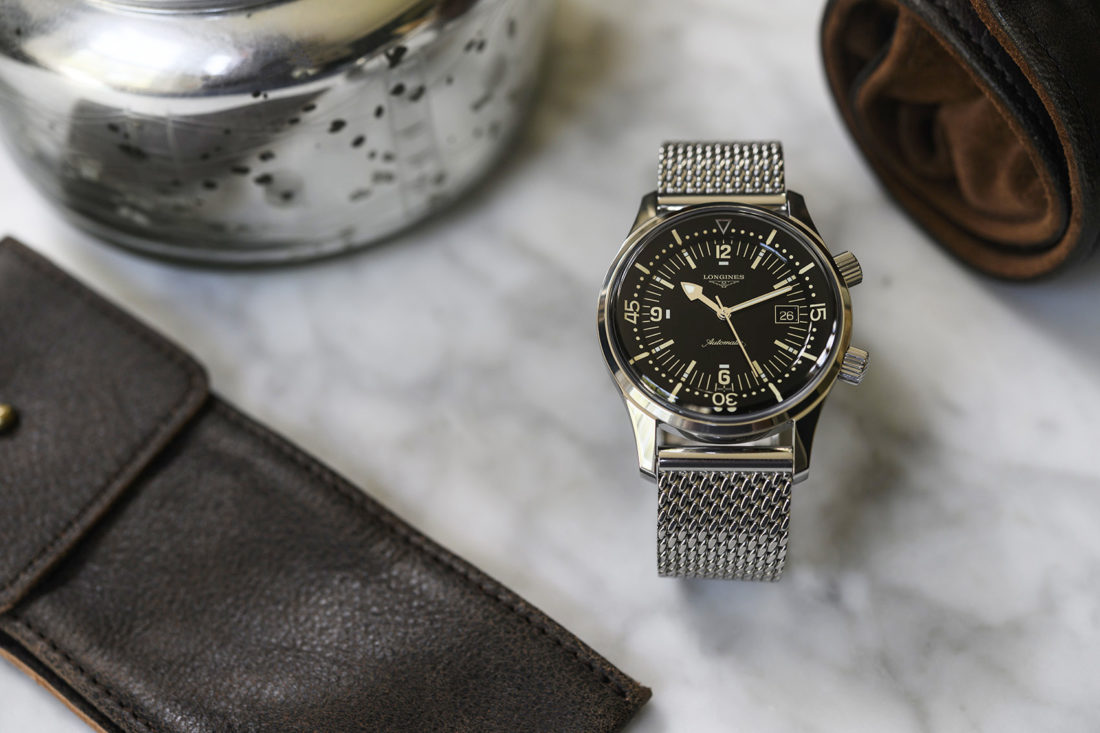 The internal bezel also features marks for each minute around its edge, with 15, 30, and 45 marks represented in throwback typefaces. The bezel carries the same black glossy texture as seen on the dial, which does reflect your surroundings to a degree. The hands will also reflect much of your surroundings, as they are reflective and the hour hand holds only a small space for lume at its broad arrow tip. This can make the hands appear black depending on the angle, making a quick read of the time a challenge depending on your environment. See gif below for an example. The hour hand of the ref 7042 had a much larger area dedicated to lume, and the LDD would benefit greatly from the same treatment.

The lume as a whole is applied in very small spaces across the dial, and legibility in low light suffers greatly as a result. Not a deal breaker in most cases, but again something to consider for prospective buyers. 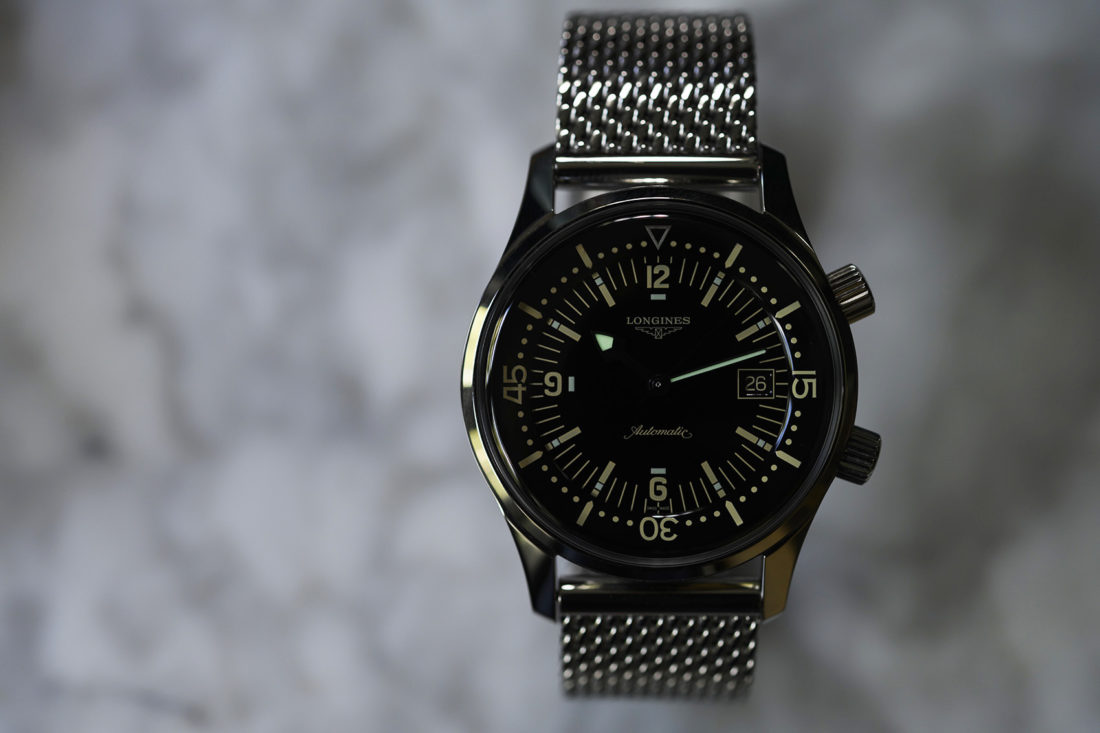 The lume of the LDD leaves a lot to be desired.

All of this adds up to a very handsome, if functionally compromised dial design. The overall character still offers huge appeal and presents a true to the original vision in modern day guise. The faux patina isn’t overdone, so it doesn’t feel like an artificial attempt to copy the original, but rather a sensible evolution that’s been picked up much further down the road. 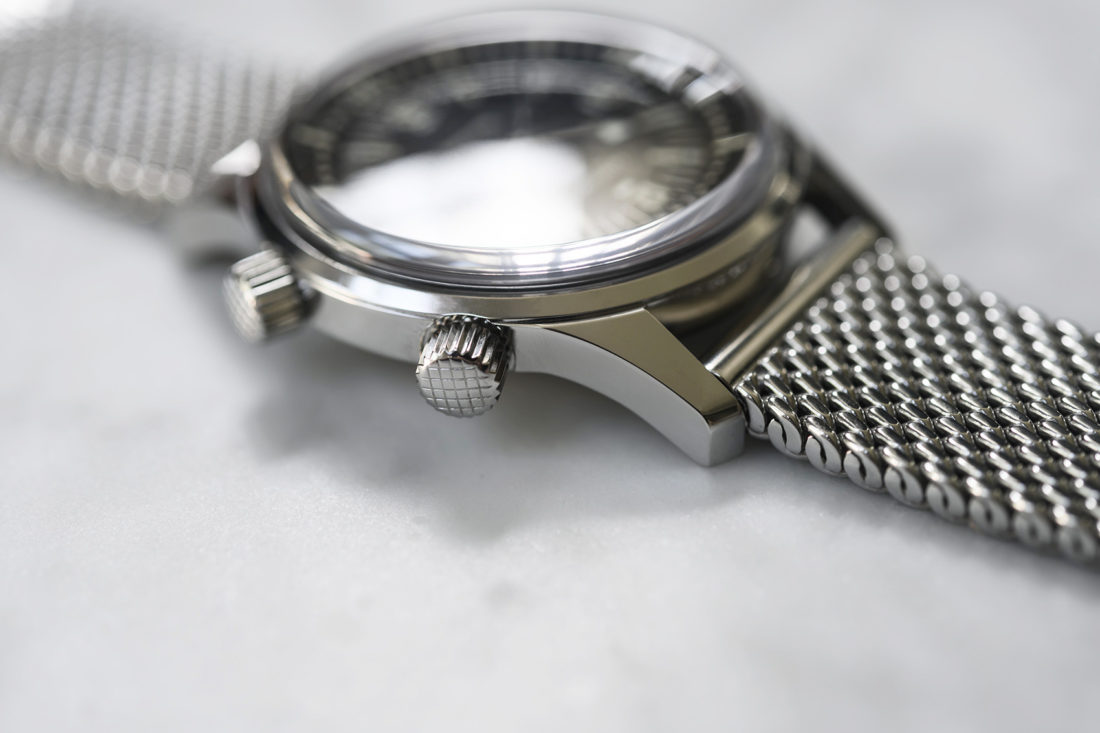 Inside the Legend Diver beats what Longines calls the L.888, which is a base ETA-2892 movement. No surprises there and this workhorse is well understood and easily serviced. Longines and ETA are both owned by the SWATCH Group, so you could call this an in-house movement of sorts. This also keeps the price in accessible territory, with an MSRP of $2,400. 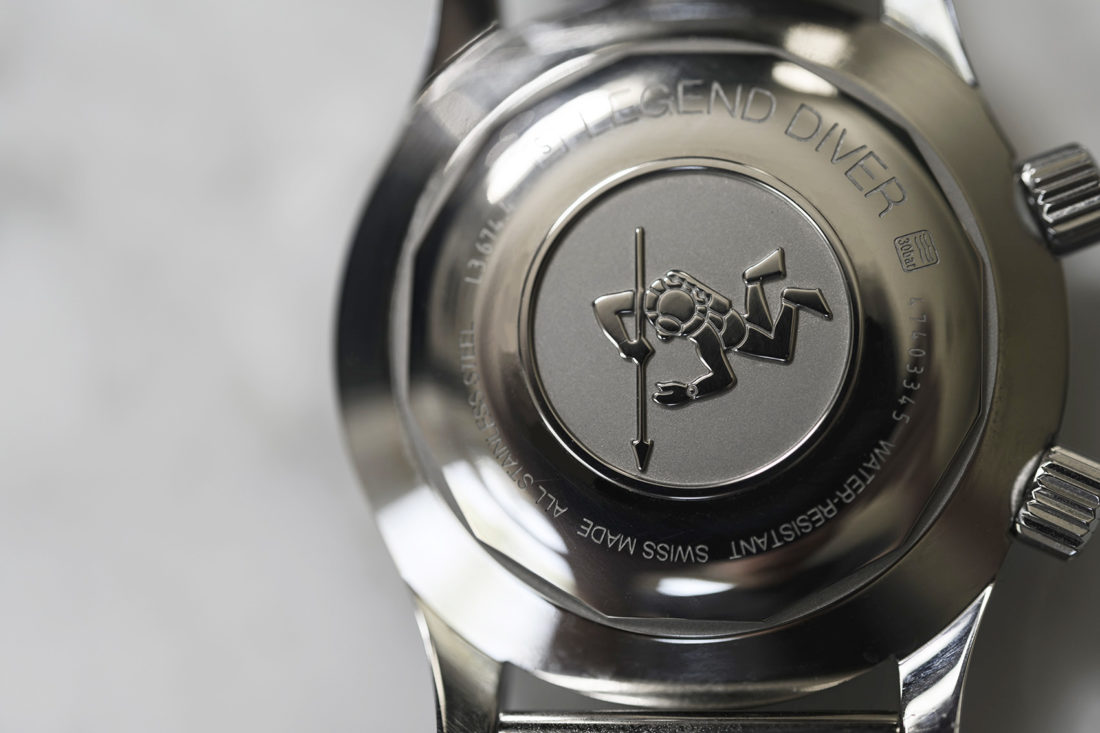 At that price, there are certainly some interesting watches that deserve a look, especially when considering pre-owned. Today, throwbacks and re-issues are far more prevalent across all price ranges, unlike the scene in 2007 when the LDD was released. One original and funky design we love is the Oris Chronoris, which can be had for around $2,000. It’s got a lot of the charm you find in the Longines thanks to the cushion case, but will wear a little easier on smaller wrists. These can even be had with internal rotating bezels.

Another attractive option with a bit of history behind it is the Rado Captain Cook, which can be had in a variety of colorways and sizes. There’s no internal bezel here but it is a spot on re-issue of the original, including the swinging logo at 12 o’clock.

Lastly, if you like larger watches and the internal bezel is a must, the IWC Aquatimer is a modern classic that will fit the bill for a bit north of the target price range. The thick hands and simple dial will make this a bit easier to read than the LDD, but it’s missing the heavy dose of vintage charm.

At the end of the day, Longines has effectively brought a piece of their past back to life in the Legend Diver. It’s already proven itself a viable option for many collectors as evidenced by its more than 10 years on the market. It’s handsome, capable, and affordable, and the added bit of historical relevance make this an all around benchmark for the category. The LDD is a viable every day watch, though it isn’t without issue, like any watch out there. Its $2,400 price feels right on point, though resale prices will get you a bit lower than that. It’s a little different than your average throwback, and that’s why it’s worth your attention.