Last year’s biggest movers weren’t sneakers, they were game consoles. As E3 approaches, the new PS5 and Xbox Series X/S are still some of the best-selling items on StockX.

Last year’s biggest movers weren’t sneakers, they were game consoles. As E3 approaches, the new PS5 and Xbox Series X/S are still some of the best-selling items on StockX.

This article is part 14 of 17 in the series: By The Numbers

2020 was a huge year for casual gamers and enthusiasts alike. Spending lots of time inside with little else to do gave gamers the opportunity to take their play to a whole new level and the release of the PlayStation 5 and Xbox Series X/S last year gave them a shiny new platform to do so. New generations of consoles from Sony and Microsoft generally release about every ten years and, as has been the case in the past, the demand for this generation of consoles has far surpassed the supply which led them to quickly sell out.

This supply shortage has led to a significant amount of new gaming consoles being sold on StockX. Three of the top six best-selling products on StockX in the last 12 months have been US Edition gaming consoles. And as if that weren’t enough to prove their dominance, the PS5 Blu-ray Edition is currently the best-selling item on StockX in the last 12 months, surpassing all sneakers, apparel, and collectibles. 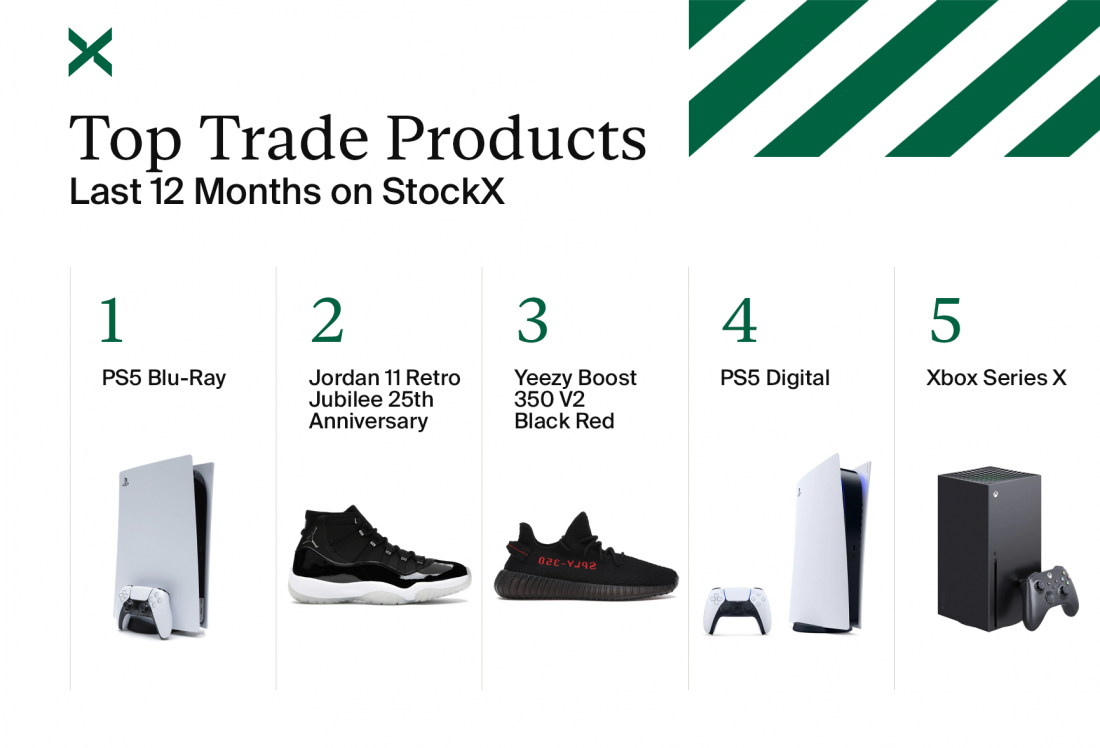 Unlike most other products sold on StockX, these consoles have, and will continue to be, restocked regularly by major retailers like Walmart, GameStop, and Best Buy. Naturally, this should lead to a drop in resale prices and the eventual equilibrium of supply and demand for the consoles, but nearly seven months after their initial release, an equilibrium still hasn’t been reached despite numerous online and in-store restocks.

Prices for the new PS5 Blu-ray Edition, PS5 Digital, and Xbox Series X have followed similar stories. Around Black Friday and Cyber Monday, the prices rose to their highest point. All three consoles were released shortly before those massive shopping days, so at that point demand was at its highest and supply was at its lowest. At that time, the PS5 Blu-ray Edition was trading on StockX for more than $1,000 USD, double its retail price. The PS5 Digital Edition saw its prices climb to over $1,000 USD as well, which means it was selling for two and a half times it’s retail price. Despite retailing at the same $500 USD price point as the PS5 Blu-ray Edition, the Xbox Series X never quite reached a resale price of $1,000. Its Black Friday/Cyber Monday resale prices peaked at around $800 USD, still a significant premium. 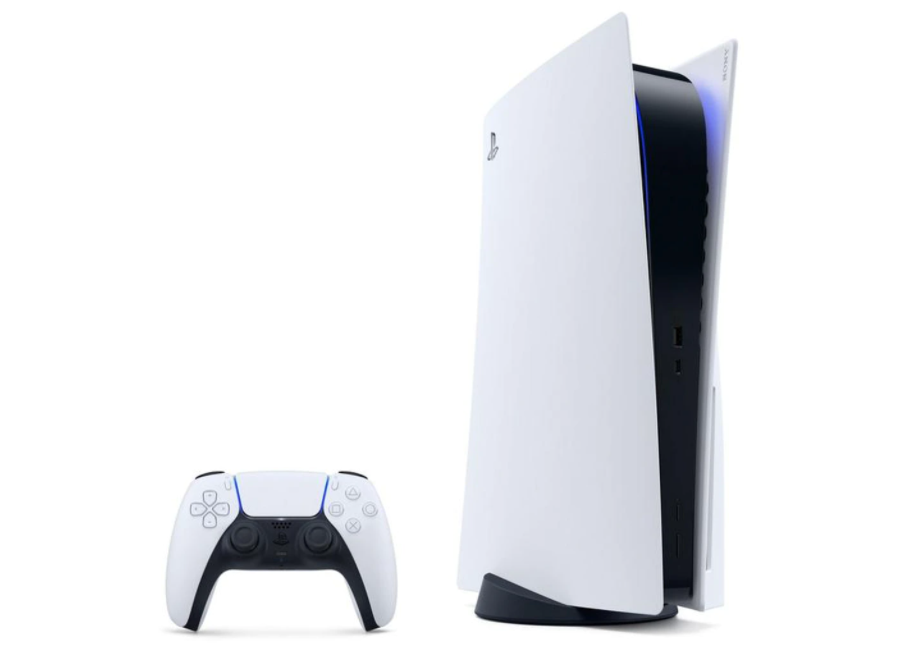 Perhaps even more interesting than the consoles’ prices around the holidays are what’s happened since then. Considering the steady flow of both online and in-store restocks, one would expect that this new generation of consoles would consistently get more affordable on the resale market. But, that hasn’t quite been the case. While all three of the major new consoles have seen their prices fall since the 2020 holiday season, the drop in prices hasn’t been consistent, instead it seems they have reached a plateau.

By the end of December 2020, just one month after posting their highest price premiums, the consoles fell in price at a fast rate. Between December 1st, 2020 and January 1st, 2021, console prices dropped nearly 30%, bringing resale prices down from the $800 USD or $1,000 USD range to the $700 USD or $800 USD range. But since then prices have either stagnated or risen. 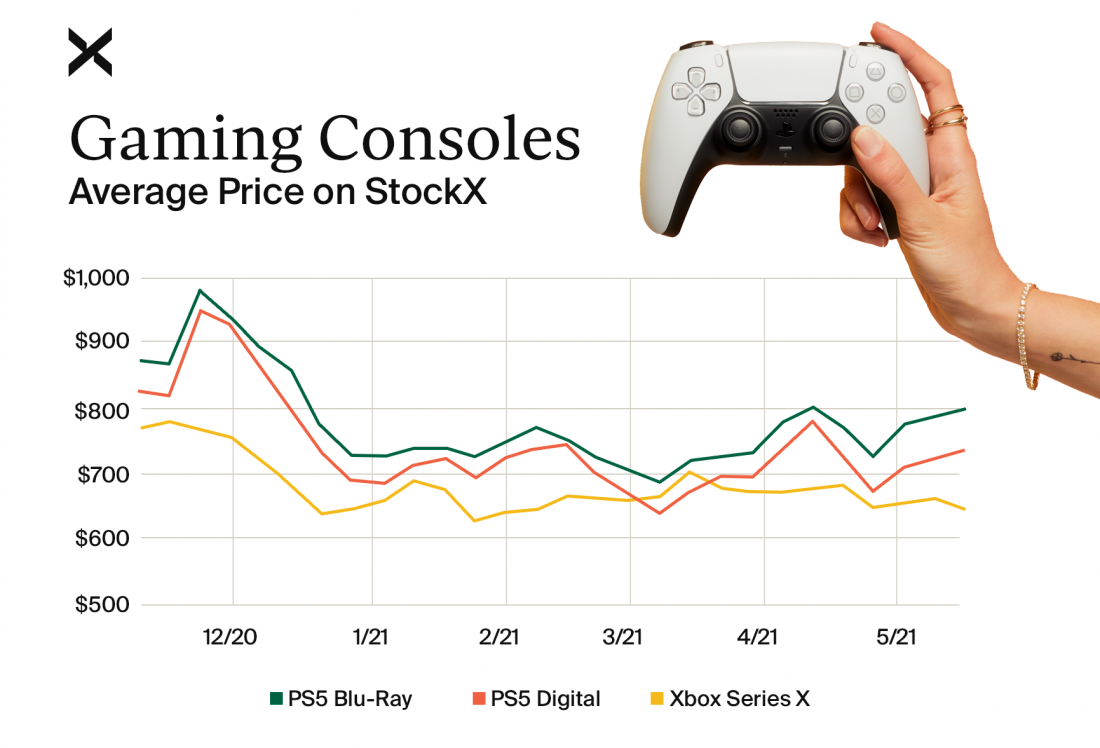 Take the Playstation 5 Blu-ray Edition for example. This console reached its peak price of over $1,000 USD in November of 2020 and then dropped to a resale price closer to $700 USD by mid-January of 2021. Between January and March, the prices stayed relatively consistent at that level but in April they began to rise again, even as Sony has continued to restock the console. In May, the Playstation 5 Blu-ray Edition was traded on a regular basis for more than $800 USD, which is $100 USD more than it was trading for earlier this year. 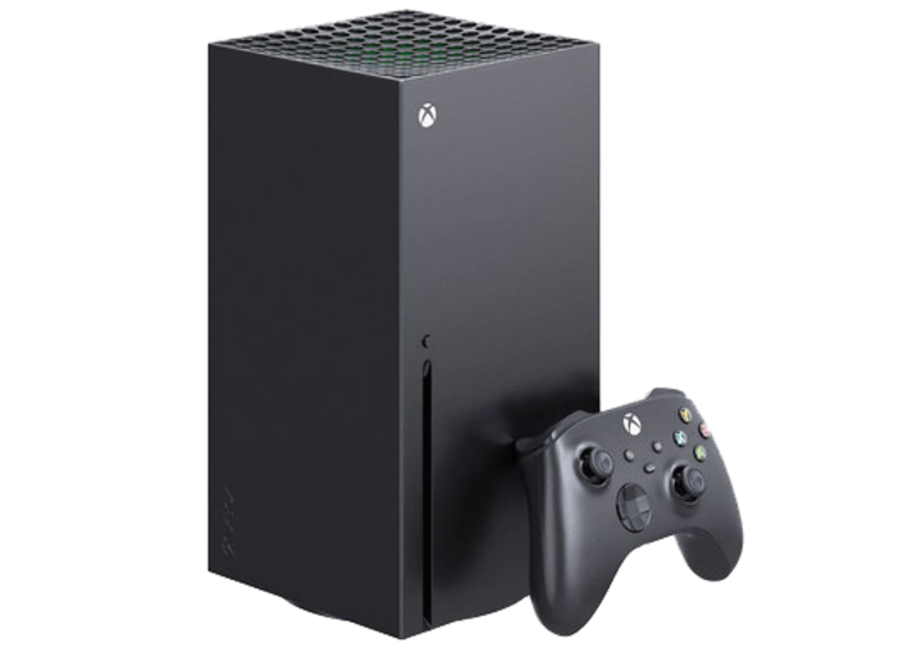 Moving forward, we will watch closely to see how future restocks continue to impact the price of the consoles. At some point, consoles should be widely available to purchase at retail price again, as supply begins to catch up to demand. That timeframe may be a ways off however, as Sony just recently announced that they won’t be able to catch up to demand until at least 2022. And as prices begin to climb for some consoles and have only stagnated for others, we may see those prices go only higher as new games are announced at E3 and another holiday season approaches in the coming months. While waiting for 2022 to grab your console may end up saving a few dollars, it might not be worth it and miss out on all the new games.

Buy & Sell the newest generation of Playstation and Xbox on StockX below. The Retro Gaming Phenomenon: Between Nostalgia and Innovation

The Retro Gaming Phenomenon: Between Nostalgia and Innovation