In Australia, the Nike Air Max Tailwind IV transcended performance sneakers, becoming a cultural sensation. We take a closer look at the sneaker inspired by space-age technology and made (in)famous by prison inmates.

In Australia, the Nike Air Max Tailwind IV transcended performance sneakers, becoming a cultural sensation. We take a closer look at the sneaker inspired by space-age technology and made (in)famous by prison inmates.

This article is part 4 of 9 in the series: Australia

The Nike Air Tailwind series’ history stretches back to 1979 and launched the development of Nike Air technology thanks to aerospace technology specialist Frank Rudy. Before cushioning the Air Force 1 and the Air Max 1, Nike Air made its debut at the 1978 Honolulu Marathon in the Nike Air Tailwind. But it wouldn’t be until 1992 and the release of the Tailwind 92 that Visible Air was introduced along with a chunky outsole that became a standard part of the line’s design.

No longer sporting a sleek and dynamic profile, the Nike Air Max Tailwind 92 copied the 1991 Air Max 180 design. Each successive Tailwind model released in the 1990s would reference the latest Air Max so that by the time the Tailwind IV hit stores in 1999, it took its design cues from the new Air Max Plus’ TPU-structured upper. Just as important, the Tailwind IV featured windows along the entire length of the sole, offering visual proof of maximum comfort. The Tailwind’s ribbed upper and exposed air would become crucial elements cementing the model’s popularity in Australia. 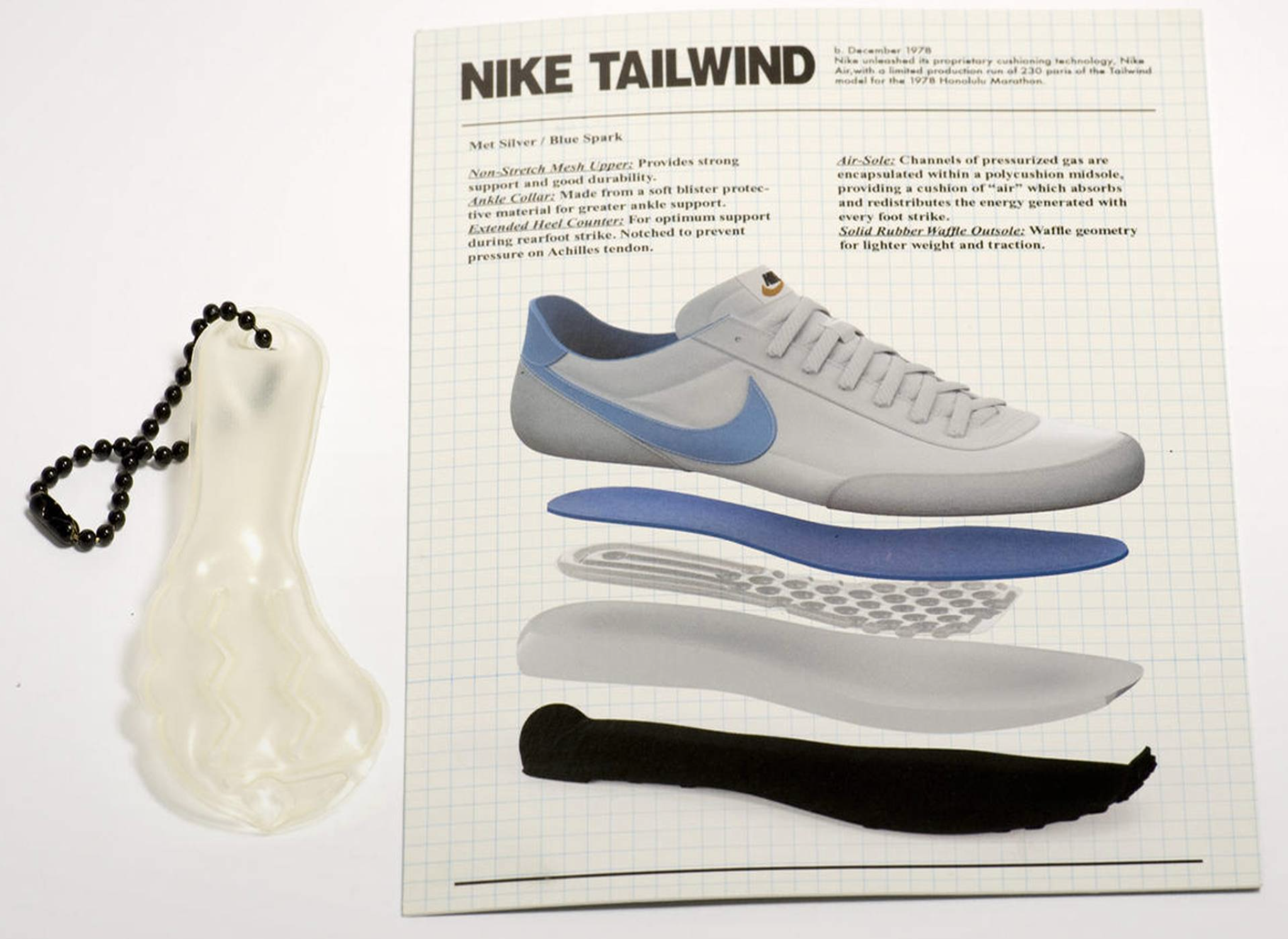 A closer look at the 1979 Nike Air Tailwind.

Endearingly known as the “Jailwinds,” the Tailwind IV is Australia’s most enduring sneaker icon. The exact origins of the silhouette’s Australian outlaw cause celebre remain unknown, but several folk tales persist. The first was the shoe’s steep price. Retailing at A$250, the Tailwind IV earned the tagline “the most stolen shoe in Australian shoplifting history.” Another origin story likens the ribbing on the IVs to prison bars. Still, others claim that the IVs were the first Air Max sneakers available for purchase in the prison commissary.

Developing a reputation and cult following outside of athletic and performance-tech aficionados, the Tailwind IV became a street-culture must-have, primarily in Melbourne and Sydney. According to the seminal Vice article on Tailwinds, “Wearing a pair of Tailwinds meant that you either wrote graffiti or you were somehow involved in crime and the scene.” Whether you were in the life, floating about crime-adjacent circles as a graffiti writer or other public scofflaw, or just interested outsider looking for a vicarious thrill, the IVs sent a message: the people wearing them were up to no good.

The answer is most likely a combination of the unique and the mundane. Boob-heads (prisoners) claimed the Tailwind IV was prized because it was one of the best running shoes on the market when released, providing much-needed foot support. The sole-length windows promised optimal comfort, a quality dearly prized since inmates were on their feet all day, every day. Although rules vary from state to state and prison to prison, for the most part, prisoners can buy some clothing and footwear through the prison canteen system or from an approved third-party vendor.

In addition to being comfortable, the IVs retained the ability to confer hard case status on anyone who rocked a pair. During the early 2000s, Jailwinds only made their into the prison system in one of two ways. One, if you were arrested wearing Tailwinds and subsequently sentenced to prison, your sneakers went with you. The second way involved coordinating with a visitor to switch shoes during prison visits. Once inside, Jailwinds proclamations of status, huge targets for rivals, and bartering tools for illicit drugs, most notably strips of “Buep” – the opioid buprenorphine.

The brash design of the IV’s upper also clicked with the Aussie sensibility of irreverence and iconoclasm. With a design lovingly described as “ugly as fuck” in the same Vice article, rocking Tailwinds provided a path to claiming a unique, counterculture identity. The Tailwind signified a way of life outside the mainstream for its devotees. No longer redolent of the outlaw life, the Nike Air Max Tailwind remains a vital Air Max silhouette of Australia’s sneaker culture.

Supreme revisited the Tailwind IV, dropping the Supreme x Nike Air Tailwind IV as part of its S/S19 season. Available in Black / Blue and White / Red colorways, the Supreme collab presaged Nike’s rerelease of the Tailwinds celebrating the silhouette’s 20th anniversary. Although imminent danger and violence are no longer part of the Tailwind’s allure, its history still makes it a popular shoe in Australia. Since January 2020, four out of the top 50 products across all verticals purchased in Australia on StockX are Tailwinds: White Regency Purple Spirit Teal, White Black Red, Red Orbit, and Resin colorways. Like Jordan 1s or Air Max 90s, the Tailwind IV remains an essential shoe in Australian – and global – sneaker history. Cherry | The Card King of Down Under

Cherry | The Card King of Down Under