This week, the Japanese Pokémon 25th Anniversary Collection releases, Topps drops one of the most expensive baseball card sets of the year with 2021 Bowman Transcendent Baseball, and Panini offers up their premium 2021 Panini National Treasures Collegiate Football set. Read up on all of these trading card releases and more in the latest issue of The Rip. 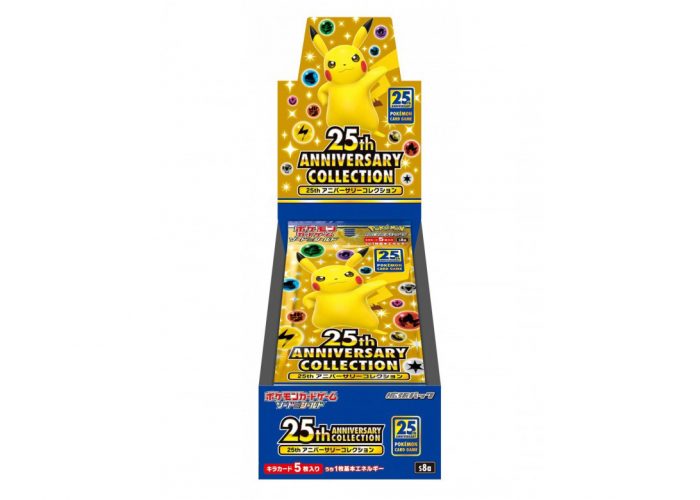 Just weeks after the English version of the Pokémon 25th Anniversary set launched under the name “Pokémon Celebrations”, the Japanese language 25th Anniversary set launches this week. The Pokémon 25th Anniversary Collection Japanese edition has 28 cards in its main checklist and will include an undisclosed number of Secret Rares as well. The cards that Pokémon trainers will be chasing after the most include several rare Pikachu cards including Surfing Pikachu V/VMAX, Flying Pikachu V/VMAX, and the four Pikachu V-UNION cards. 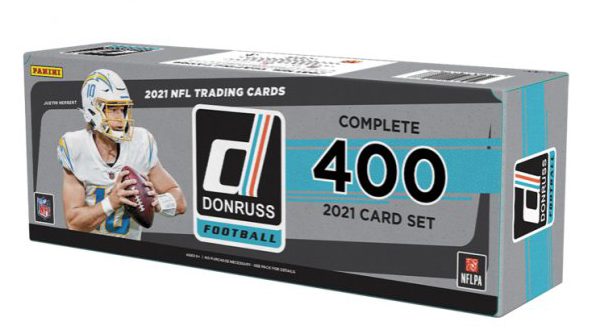 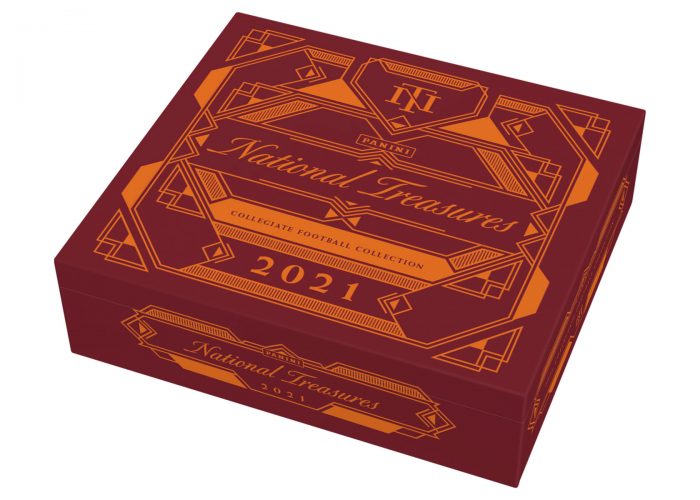 For NCAA Football card collectors, 2021 Panini National Treasures is the premier set of the year. The set covers the incoming 2021 NFL Draft Class wearing their college uniforms, which means this is a rookie card-only product. While there is a base set checklist and base color-variation parallels, collectors are solely after the autographs and relics in this set, especially the Jumbo Rookie Patch Autographs that feature on-card signatures and large multi-colored pieces of the player’s game-worn college uniforms. Like all football sets this year, Trevor Lawrence is the main player to chase after, but other top draft picks such as Zach Wilson, Justin Fields, Mac Jones, Jaylen Waddle, and more are all included.

The 2021 Panini National Treasures Collegiate Football Hobby Box comes with a total of eight cards, seven autographs or relics, and one base or base parallel card. The high-end set is seeing presales listed for around $1,000 per box. 2021 Panini National Treasures Collegiate Football will release on October 20th at local and online trading card hobby shops. 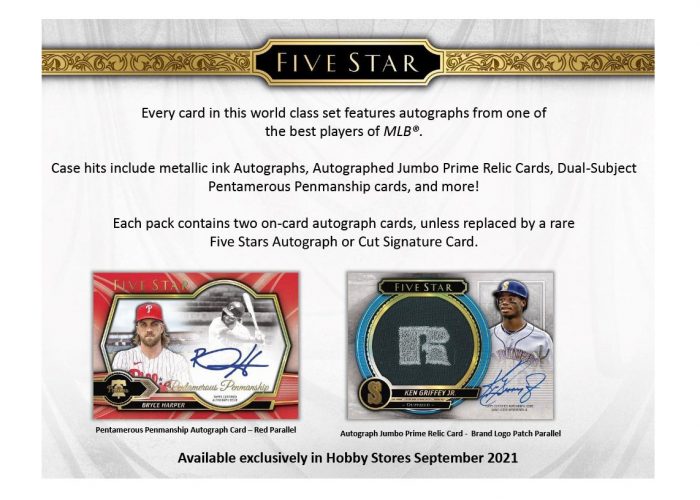 2021 Topps Five Star Baseball is a set made up entirely of autographs and autograph relic cards. Making up the checklist are some of the absolute best names the game has ever seen from past and present including Mike Trout, Juan Soto, Derek Jeter, and Alex Rodriguez. Some rookie cards are also included, such as Ryan Mountcastle and Dylan Carlson. 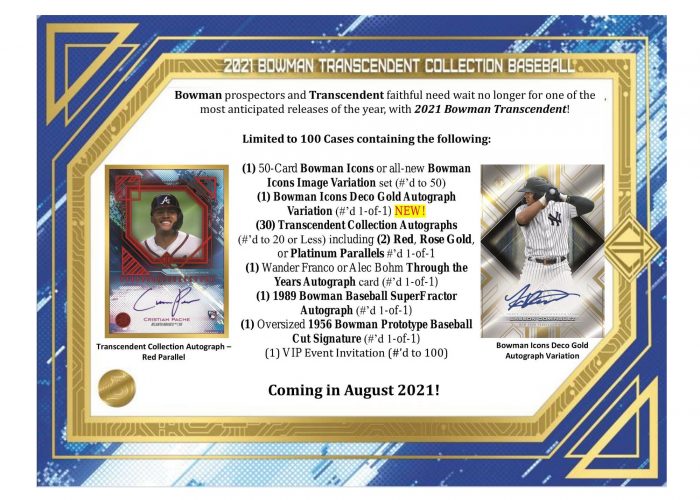 2021 Bowman Transcendent Baseball marks the second consecutive year for the super-premium MLB set. Only 100 total boxes of 2021 Bowman Transcendent Baseball are being produced with each to have an expected price of over five figures. Top prospects like Julio Rodriguez and Jasson Dominguez are included as well as oversized 1956 Bowman Prototype Signatures that include autographs from legendary baseball players as well as historical figures like George Washington.

The 2021 Bowman Transcendent Baseball Case comes with 84 total cards including one complete set of Bowman Icons Base Cards, 30 Transcendent Autograph cards with print runs of 20 or less, one 1989 Bowman SuperFractor Autograph, one Bowman Icons Deco Gold Autograph, an Alec Bohm or Wander Franco Through the Years Autograph, and Oversized Cut Signature, and a ticket to a VIP event. The VIP event is limited to 100 tickets and includes an evening with some of baseball’s most promising future stars.

2021 Bowman Transcendent Baseball will be released on October 20th. 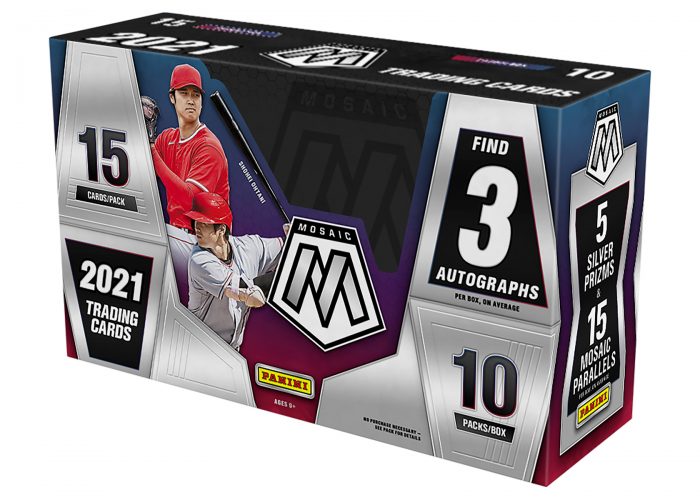 The Panini Mosaic product line has quickly become one of the most collected basketball and football card sets since it broke away from the Prizm set in 2020, and now it is making its diamond debut with 2021 Panini Mosaic Baseball. This is an MLBPA set, meaning that it will not feature any trademarks or logos of Major League Baseball as Panini does not hold the MLB license. In addition to the base set, 2021 Panini Mosaic Baseball will host a variety of hits including Stained Glass inserts, Autographs Mosaics and Rookie Autographs Mosaic, plus more.

The 2021 Panini Mosaic Baseball Hobby Box is loaded up with 15 cards per pack, and ten packs per box. You will typically find three autographs, two Mosaic Red Parallels, and five Silver Prizm parallels in each box. Much like the NBA and NFL versions of the Mosaic cards, 2021 Panini Mosaic Baseball is expected to also have a retail release featuring blasters, mega boxes, and hangers. 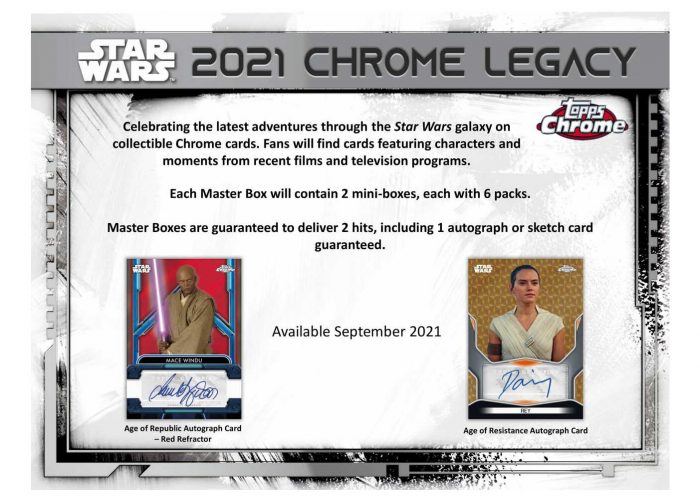 2021 Topps Star Wars Chrome Legacy focuses on the latest film and television stories from a galaxy far, far away. The base checklist highlights characters and moments from The Rise of Skywalker, Solo, Rogue One, The Mandalorian, Star Wars Rebels, and The Clone Wars. In addition to the limited edition parallels for each base card the set also holds autograph cards from some of the biggest actors and actresses who have appeared in the Star Wars film and television franchise such as Samuel L. Jackson and Daisy Ridley. Sketch cards will be the other big hits in the set, which will feature artwork from the franchise.