From Nike to Crocs, check out which collaborations came out on top as the favorites from 2021. Find them all on StockX, where they are always available for the holiday season and beyond.

From Nike to Crocs, check out which collaborations came out on top as the favorites from 2021. Find them all on StockX, where they are always available for the holiday season and beyond.

This article is part 14 of 18 in the series: Warming Up To Fall

2021 was full of surprising and notable collaborations. Brands like Nike and Crocs teamed up with famous friends and new favorites to create some of this year’s most coveted releases. As always, they’re available and in stock on StockX, whether you’re copping them for the holidays or beyond. 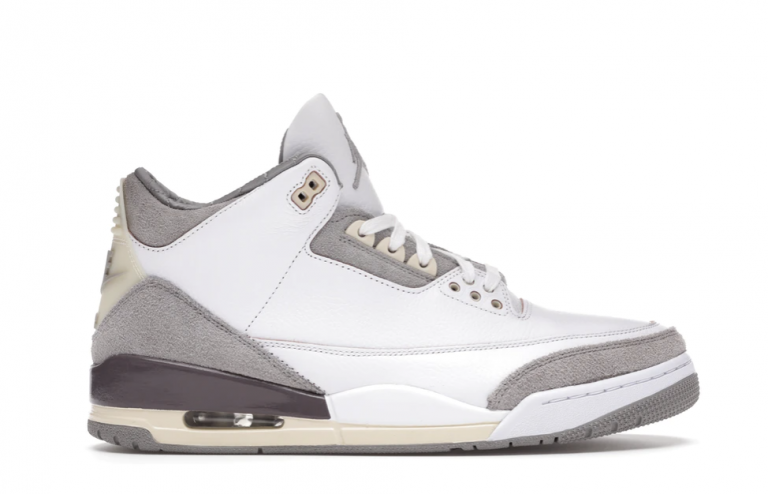 The inspiration behind retailer A Ma Maniére’s Jordan 3 helped create one of the more captivating collaborations of the year. In an interview with Nike, AMM’s co-founder, John Whitner, explained that the project was inspired by both Black women and the desire to showcase luxury through a Black cultural lens. The sneaker utilizes a mix of suede, tumbled leather, and quilted silk lining to push the project’s theme, while an aged midsole and heel tab pay homage to Whitner’s first pair of Jordan 3s gifted to him by his mother. Despite a lack of teasers and information about the project ahead of time, the release instantly sold out, proving that hype doesn’t have to be the only driver to a successful release. Even though the sneaker has sold out, it is still readily available on StockX in a full family-size run. 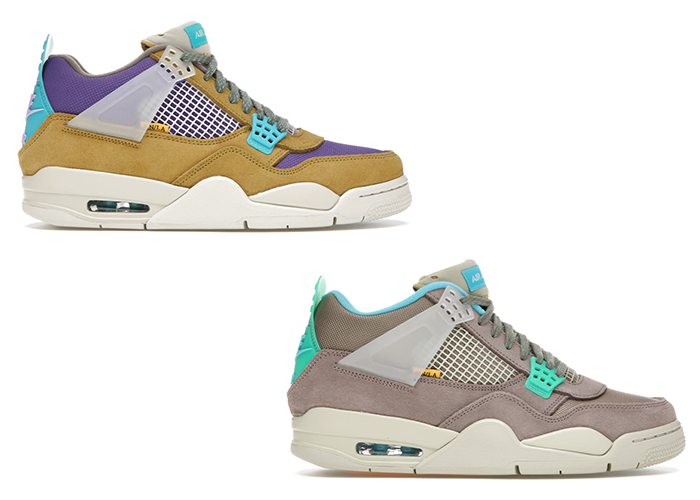 Chris Gibb’s Union LA retail brand adds to this list of heavy-hitting collaborators with their second set of Jordan 4s. Unlike 2020’s first capsule that was inspired by retro 1980’s aesthetics, the design for this year’s releases drew from the great outdoors and its accompanying equipment. Both pairs utilize a mix of Durabuck and textile uppers to convey the colors of outdoor terrain and tents. The sneaker’s unique construction brings a lot of attention to this collaboration, specifically for its folded tongue, which pays homage to the way the sneaker was often styled back in ‘89. 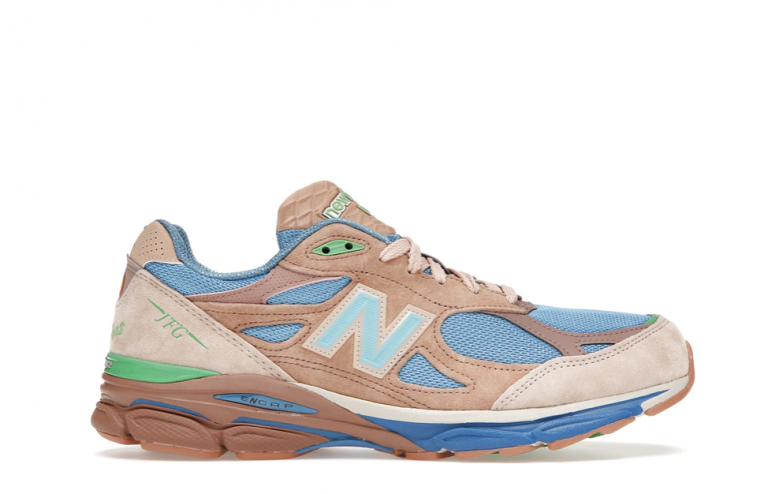 If any sneaker brand needs a lesson on how to transform the public view of their products, they can learn a thing or two from New Balance. As of late, the brand has worked with some major collaborators that influence today’s sneaker, streetwear, and artistic cultures, which has diversified the brand’s fanbase outside of their Dad-centric ethos. This year’s collaboration with Chicago artist Joe Freshgoods helped push that revamped aesthetic that New Balance has been cultivating. The New Balance 990v3 Outside Clothes design drew inspiration from the feeling of summer days as a youth playing outside. Using a mix of tan suede, light blue mesh, and hits of green throughout, this sneaker gives all the good vibes of summer no matter the season. And as the weather gets cold again in certain places of the world we could all use something to make us feel the hot summer weather. 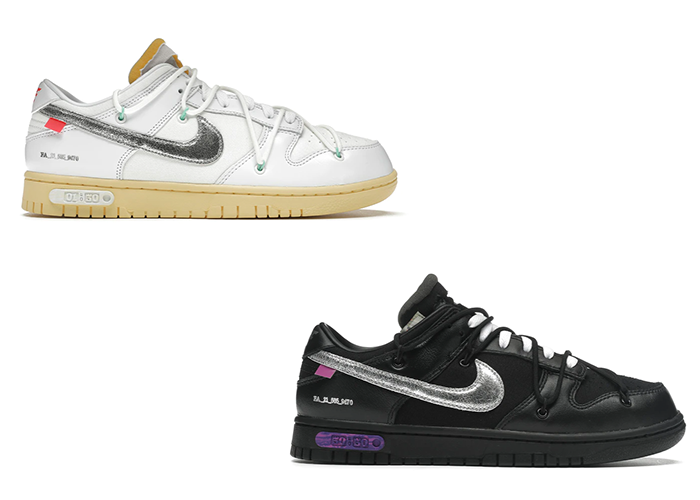 In an unexpected turn of events, this year saw one of the biggest projects to release between Nike and Off-White founder, Virgil Abloh. Titled “The 50”, this project explored Off-White’s motto of “defining the grey area between white and black”. The collaboration took a more literal turn towards the motto, releasing a “Lot” of Nike Dunks, with Lot 1 and 50 being white and black and Lot 2 to 49 featuring white and grey uppers and a mix of colorful linings and laces. The pictured sneakers above are just two pairs from the pack but you can secure any and all pairs from the lot on StockX for the upcoming holiday season. 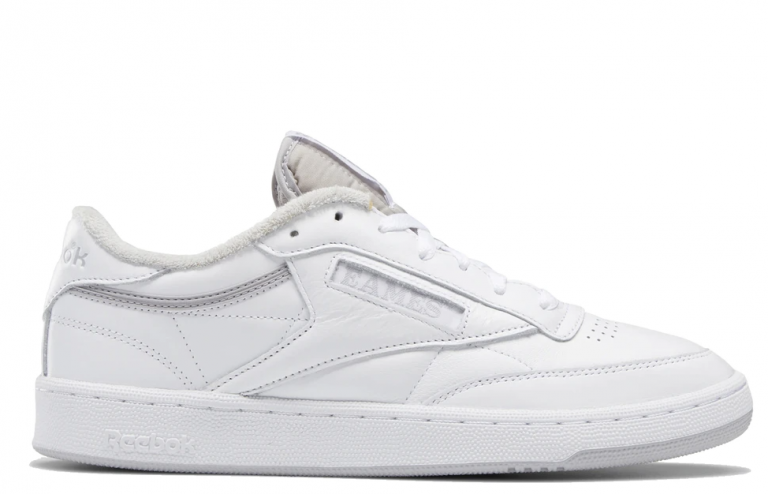 The Reebok Club C has acted as the canvas for many of Reebok’s collaborations with brands like Maison Margiela, JJJJound, and Awake NY. This year, the Eames Office Design House put their own spin on the silhouette, adding a more subtle monotone take for the shoe. The sneaker is one of two in a pack and pays respect to furniture design legend, Charles Eames, and his love for simplistic yet functional design. This pair from the pack features plush white leather uppers and grey trim on the collar, and Eames’s name and logo on both the tongue and side panels. For those who are moved by Eames’ work or are looking for an everyday-wear shoe, this has the perfect mix of hype and practicality. 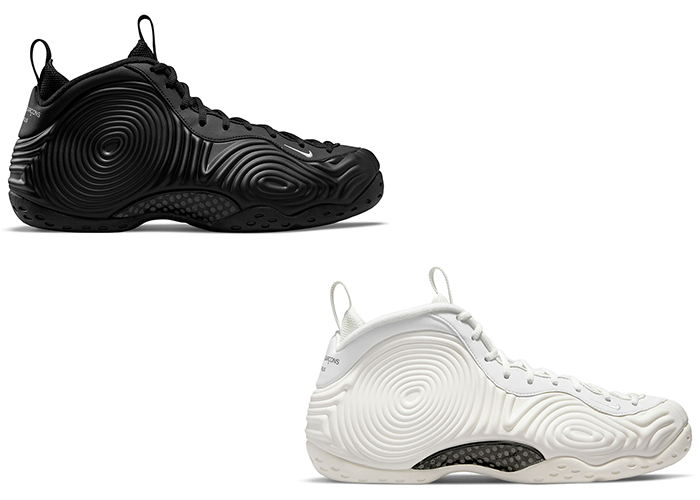 Comme Des Garçon and Nike are trying to bring back the Foam craze of the mid-2010s with their upcoming collaboration. The two brands come together to drop a new iteration of the Nike Foamposite One, a basketball sneaker made famous by Hall of Famer Penny Hardaway in the late 90s. The sneaker has always been recognized for its unique use of materials and sculptural upper design. Although it had a strong run within streetwear fashion in the mid-2010s, with much thanks to popular releases like the Galaxy Foamposite, the Nike Foamposite has dropped off from many people’s radar as of late. But this upcoming collab brings new energy to the model, introducing a new circular pattern on the upper. Coming in both white and black, either pair will make an amazing gift for those looking for something that will surprise and delight all at the same time. 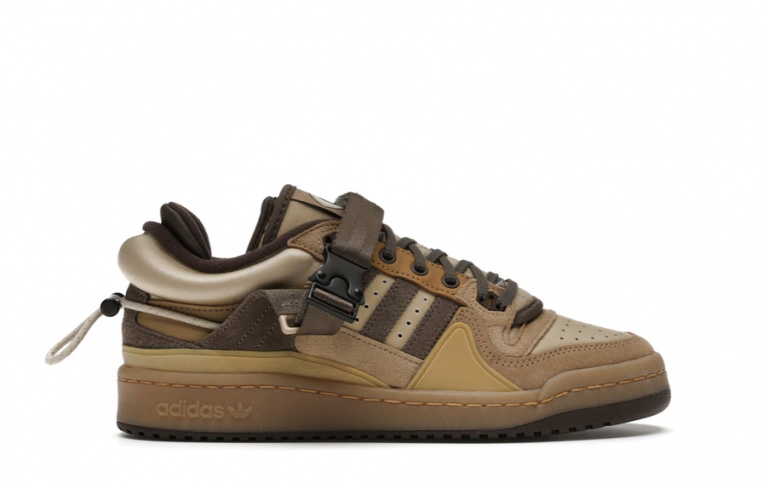 Based on our data, there is strong evidence to suggest that Latin pop star Bad Bunny could be the next big musician in collaborations. Bad Bunny’s first project with adidas took the form of a Forum Low. Usually, the adidas Forum hasn’t always been the strongest sneaker within the secondary market despite being an iconic sneaker in the Three Stripes’ history. But Bad Bunny’s touch on the model catapulted it to new heights. In our By The Numbers piece from May, we found that in the last five years, the adidas Forum Low Bad Bunny posted the highest release week premium for a debut artist collab on StockX. This alone is enough to prove that this sneaker is one of the top fan-favorite releases to date. Before the numbers get too high though, it would behoove anyone to cop a pair for the holidays, because even if you’re not a fan of the shoe itself, it will make a great investment. 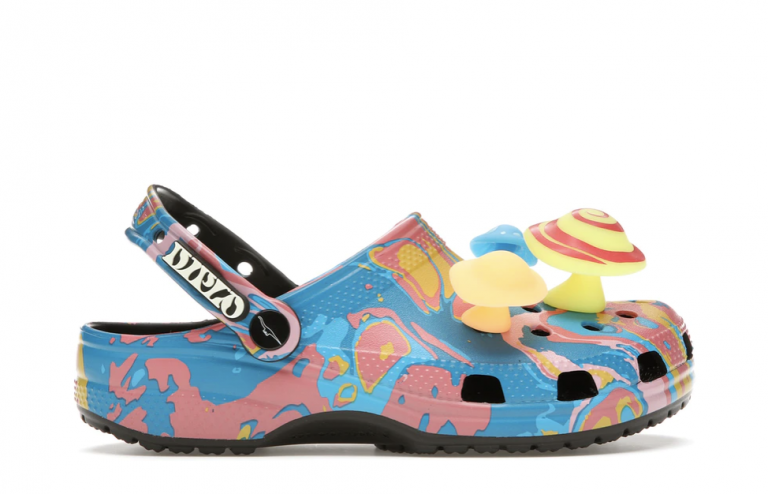 Crocs Classic Clog Diplo Take A Walk On The Weird Side

No one anticipated Crocs rising to the level of hype that they have this year, but we’re here for it. Like other Crocs collaborators Justin Bieber and Bad Bunny, DJ and producer Diplo had his hand in making one of the more memorable Crocs of the year. Titled “Take a Walk on the Weird Side”, Diplo’s collaborative Crocs takes the Classic Clog and brings it to different levels of weird, featuring tie-dyed swirls of blue, pink, and yellow. Bringing more uniqueness to the shoe are mushroom-shaped Jibbitz on the clog’s perforations, looking as if it were sprouting from the Crocs itself. Pretty trippy. For fans of both the comfy and unusual, Diplo’s Crocs Classic Clog “Take a Walk on the Weird Side” is definitely one of this year’s more memorable releases. Crocs Classic Clog Diplo Take a Walk on the Weird Side