Victor Solomon, the Los Angeles by way of San Francisco and Boston artist, has been elevating the look, style, and culture of the NBA over the last five years. “Literally Balling,” his series of related art projects, reinterprets the everyday objects of basketball through elite techniques and materials including stained glass, silver, and crystal. From taking part in the recent StockX x YouTube NBA Finals Game 1 Watch Party, designing the “House of Highlights” moment of the year award, preparing an installation for the NBA Summer League, to reimagining the NBA conference champions’ trophies, Victor Solomon is actively shaping and reshaping the aesthetics of the sport.

The following interview has been lightly edited for length and clarity.

StockX: Victor, thank you for talking with us. Would you mind introducing yourself?

Victor Solomon: My name is Victor Solomon. I live in Los Angeles by way of San Francisco and Boston. I do an art project called “Literally Balling,” which takes these icons of basketball and reinterprets them with techniques and materials that have historically been reserved for the elite.

Would you please elaborate a little bit more on the inspiration behind “Literally Balling”?

I mean I’ll go way back to the genesis of the project. I had been living in San Francisco and working as a filmmaker and started dabbling in different mediums of art. I grew up in Boston and was always a huge sports fan, coming in at the tail end of the Larry Bird Celtics. So basketball always had a very special place in my heart. I was feeling kind of down with how much money was required actually to execute a vision in the film world. So I was kind of just looking for an outlet.

San Francisco has a vibrant history of stained glass; stained glass has such a great history with what it meant for kings and churches in medieval times to show their political, financial, and culturally dominance. I see basketball as taking a more and more central point culturally, and it just feels like these guys are these new kings in a way, and sometimes they literally refer to themselves as that. 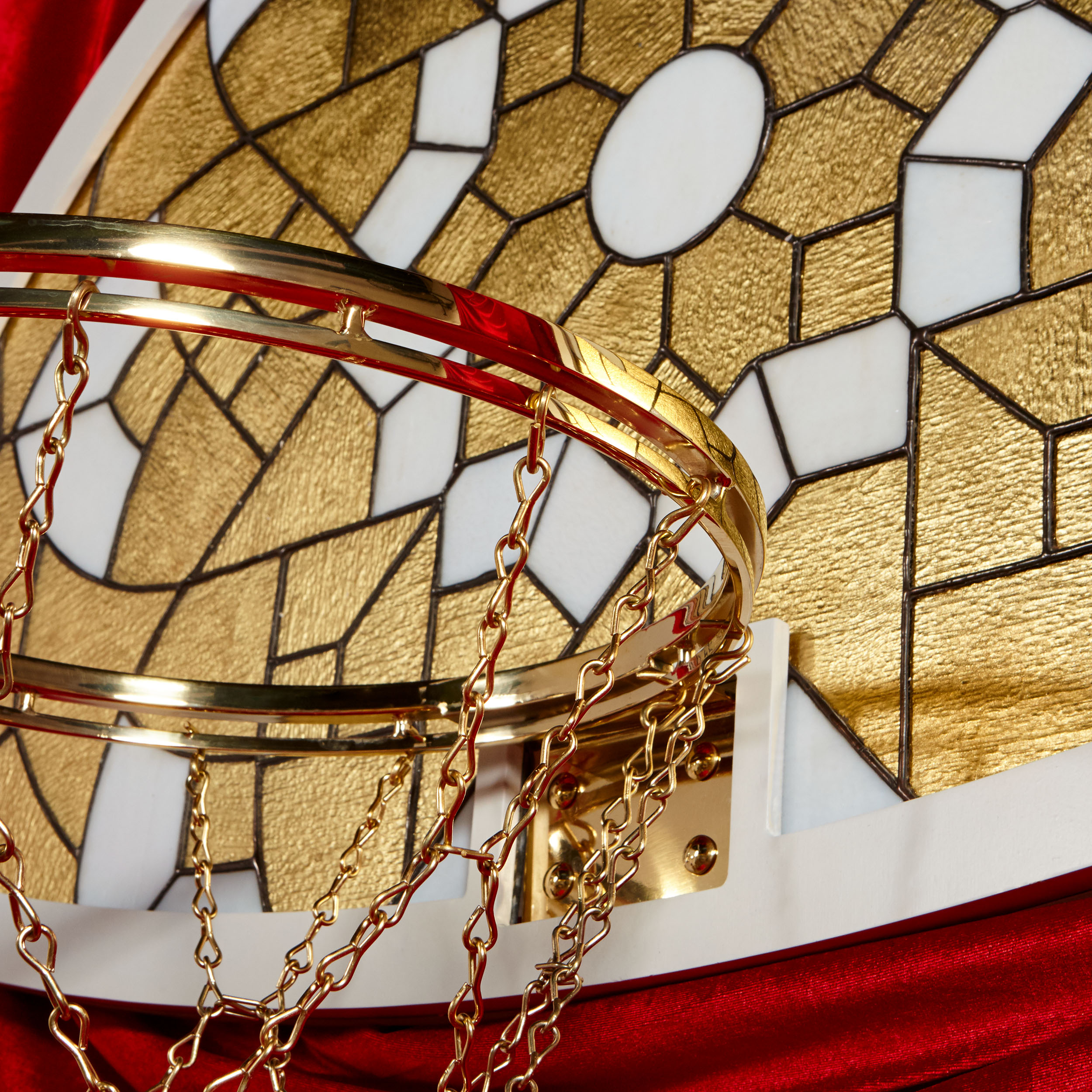 So all of this was the germination of the idea of the project. I found this stained glass studio in San Francisco with all these old-timers and apprenticed there for a year. They taught me how to make Tiffany glass and all these little techniques and things that they had learned. Out of my own personal curiosity and trying to challenge myself creatively, I made the first basketball hoop. I put it out on my personal social media; it generated some press and got a commission. That was four years ago, and things have been rolling ever since.

Wow. So this went quickly from being a story you were interested in telling to being something that resonated with a lot of people.

Yeah, it tapped into something that was happening on a broader cultural level. It just tapped into something. I think that people have an appetite for elevating the aesthetics around the sport and adding another layer of storytelling to the iconography. I think there is a real appetite for developing more in-depth storytelling around the original icons of the sport, as well.

“Literally Balling” is evocative of Gilded Age excess. Is your project commenting on contemporary experiences of inequality and lack of access to resources for upward mobility, perhaps suggesting we’re in a new Gilded Age?

I mean, I think I don’t necessarily highlight it, but there is definitely an irony that goes into the narrative behind the project beyond the shiny basketball art. I think there’s a delicious irony of mixing here since basketball has no barrier to entry, it provides an upwardly mobile platform to change the circumstance of your life which is a beautiful story that we’ve seen time and again in the league. And there’s this delicious irony that goes into the project that the instinct for new money to adorn everything with jewels and gold betrays the functionality of the objects themselves: The pieces are unplayable. 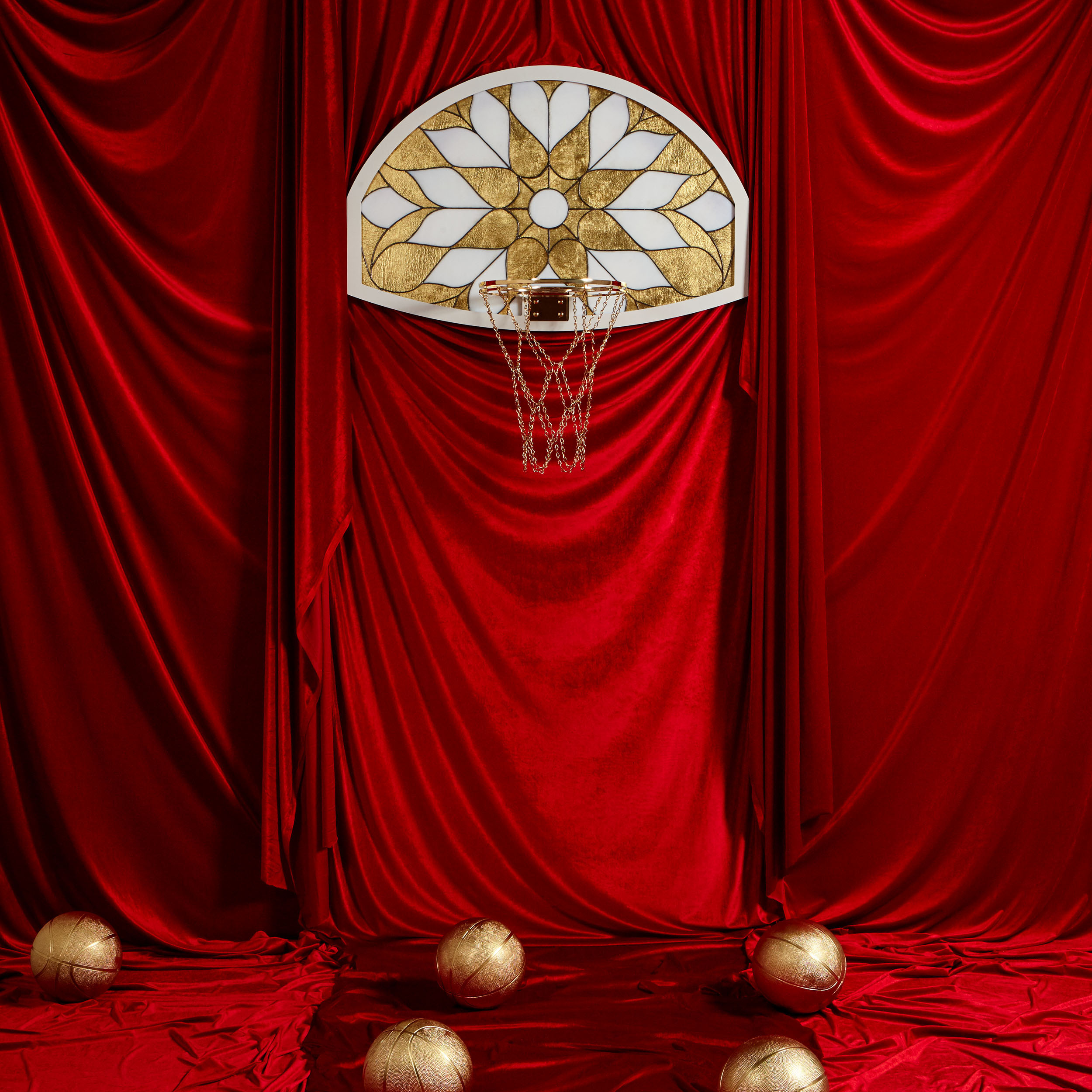 You’ve already mentioned that you grew up a Celtics fan, but do you have a favorite player?

I do. I have a weird appreciation for Rajon Rondo. I feel like I relate to Rondo in a very specific way and that we’re both kind of these like moody, possibly tortured, dudes that are operating in a particular space and at the same time we have a lot of outside interests beyond the surface level of what we’re involved in. I’ve always felt very connected to Rondo, despite him going to the Lakers last year.

Have you ever met Rondo?

No, I never met Rondo. I have a thing where I think I would rather not. I think I’m projecting certain things from my personality onto him so I’m hoping to keep that vision pure.

Growing up in Boston, you played basketball. Do you still play?

Yeah. There’s a run we have with a bunch of artists and creatives I know. It’s just nice to get out there and get a sweat going with the guys.

Do you have a favorite shoe that you wear when you play?

It’s a little unorthodox, but lately, I’ve been really into the [Nike] React 87. I know it’s not basketball appropriate, but that’s what I’ve been running around in a lot.

Any particular sneaker that you’ve always appreciated aesthetically or found fascinating from a cultural standpoint?

I think the Nike Blazer is great.  It’s the genesis of the first modern basketball shoe, and the silhouette of the blazer is so clean that it is a very open platform for interpretation. I love the blazer, and I guess when Virgil [Abloh] touched the blazer, he reminded people that the silhouette still existed. But I’d love to see it make it a little bit of a basketball run again, just going back to the lineage of it. 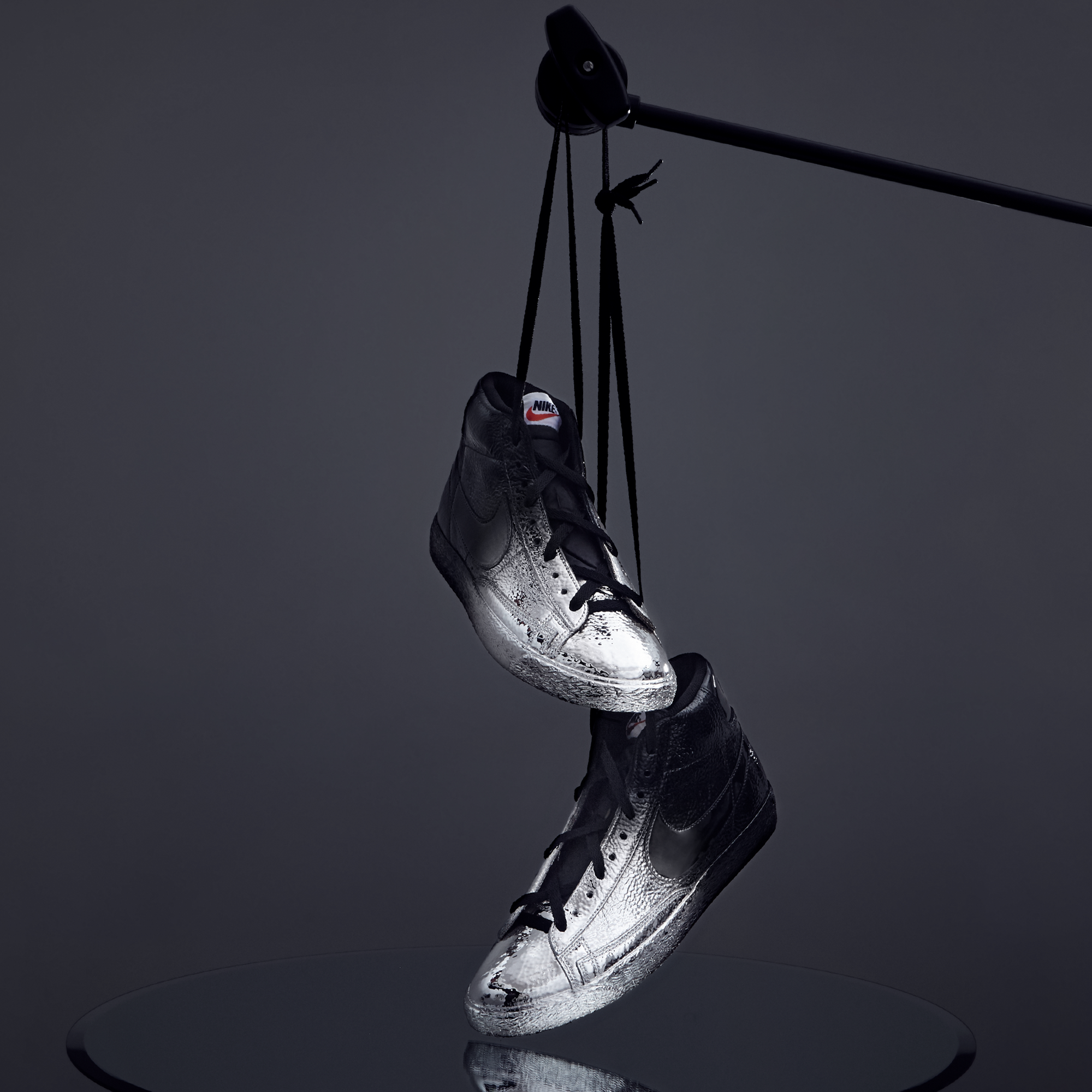 I want to talk about your creative process. Would you walk me through how you create a project? How do you decide on technique and the medium to amplify your work?

Sure. Last year I wanted to extend the project into interpreting basketball to further the project. I wanted to get a little bit away from stained glass. So I had this idea to put silver on a ball, and I was trying to figure out an entry point to that. So I met this guy who developed this silver deposit that happens almost like aerosol or like an aerosol sort of application, and I wanted to see if it was possible to do it on a ball. So we did some tests and experimented, and it looked ok. But the guys made a mistake on one of them, and they didn’t fully cover the ball and had this nice drift from silver to black on the piece itself. This got me thinking about the burn that happens on a space shuttle returning into the atmosphere and then that sort of opened the door for this type of basketball shot that’s called a moonshot because it’s super high in the air, and then it will drop down into the hoop, hopefully, if you’re lucky. 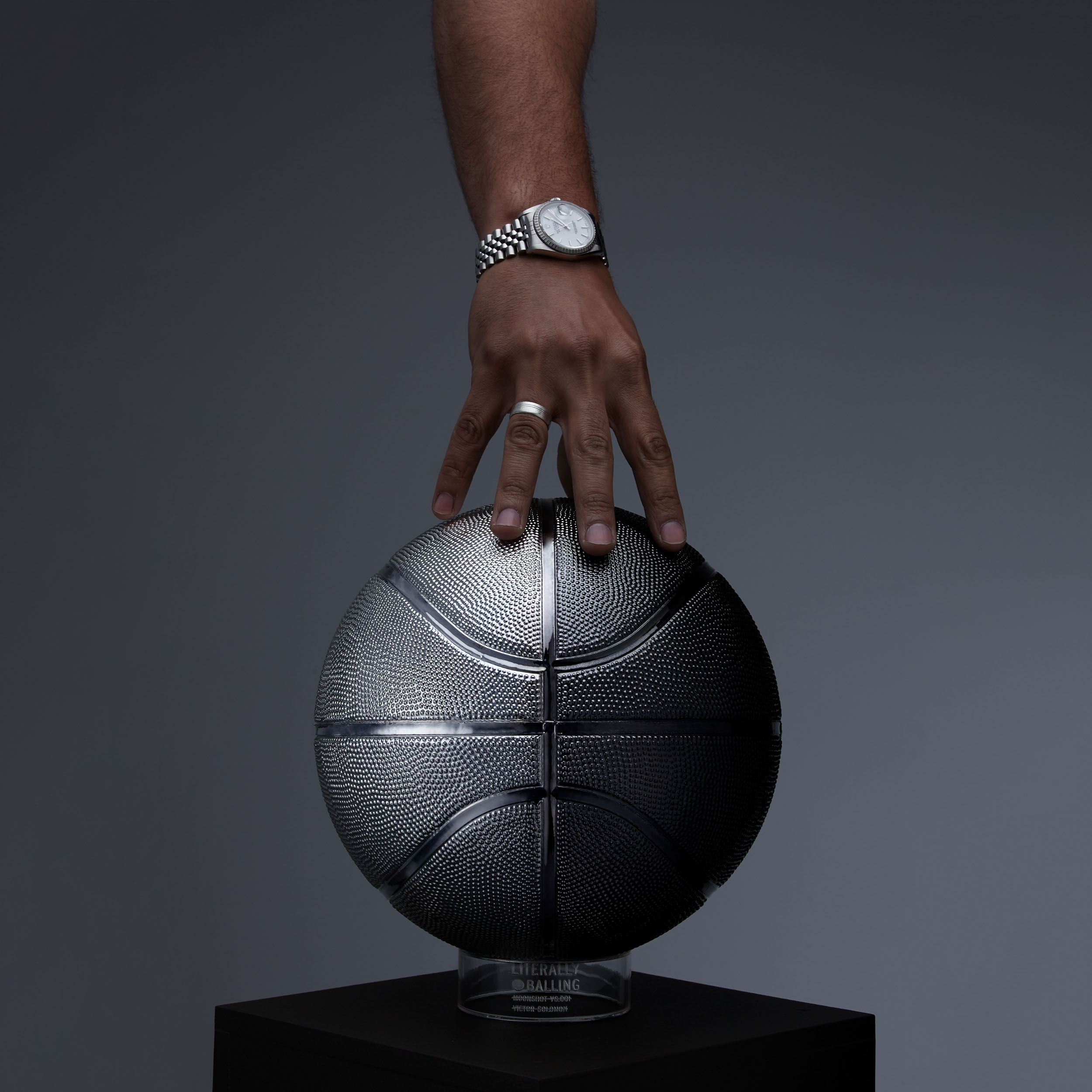 So “Moonshot” obviously has a double meaning with the idea of this burn from atmospheric reentry of a shuttle with this technique that we had accidentally stumbled upon; it was this kind of convergence that created the first “Moonshot” limited release ball. So it’s kind of like a bunch of different pieces that are kind of scattered and serendipitously fall together and get interpreted into what becomes the final piece. But it’s very mysterious even to me and uncontrollable. It’s very hard just to sit down and come up with an idea. 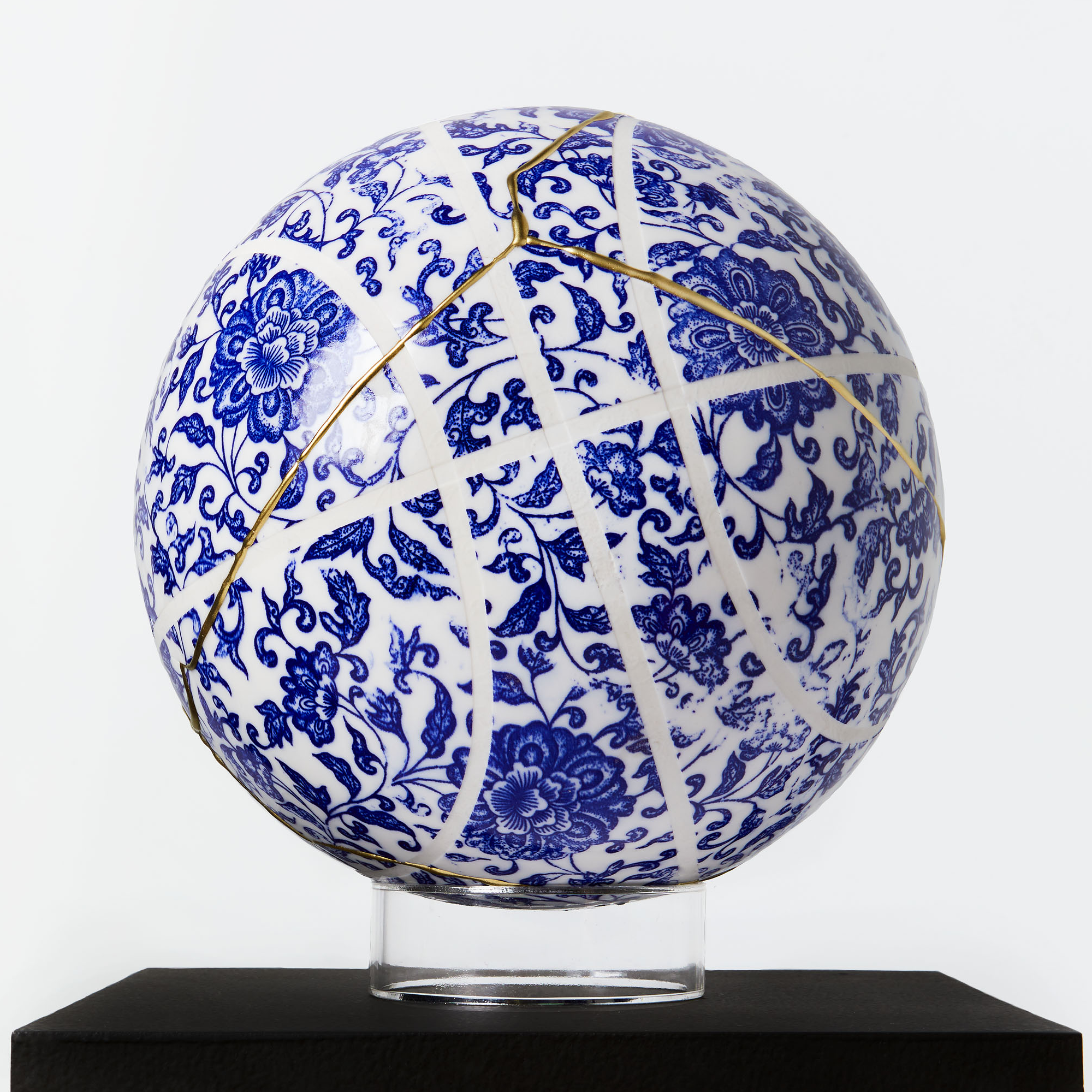 Would you mind telling me about your “Camelot” piece?

So as a continuation of the idea to create something and make it more accessible than the backboards, I wanted to take my work a step further and expand it into a piece that could be wearable and something that could be even easier to collect and participate in and still continue the aesthetic of “Literally Balling.” I’ve been thinking of “Literally Balling” as the couture show, and “Camelot” will become the ready-to-wear component.

These are traditionally practical pieces like a backboard or like a sweatband, and I use these elegant and high luxury inspirations to elevate them to a new place. The “Camelot” wristbands took inspiration very directly from the shape of the Rolex presidential bracelet, and I figured out this technical 3D process to realize that as a sweatband. 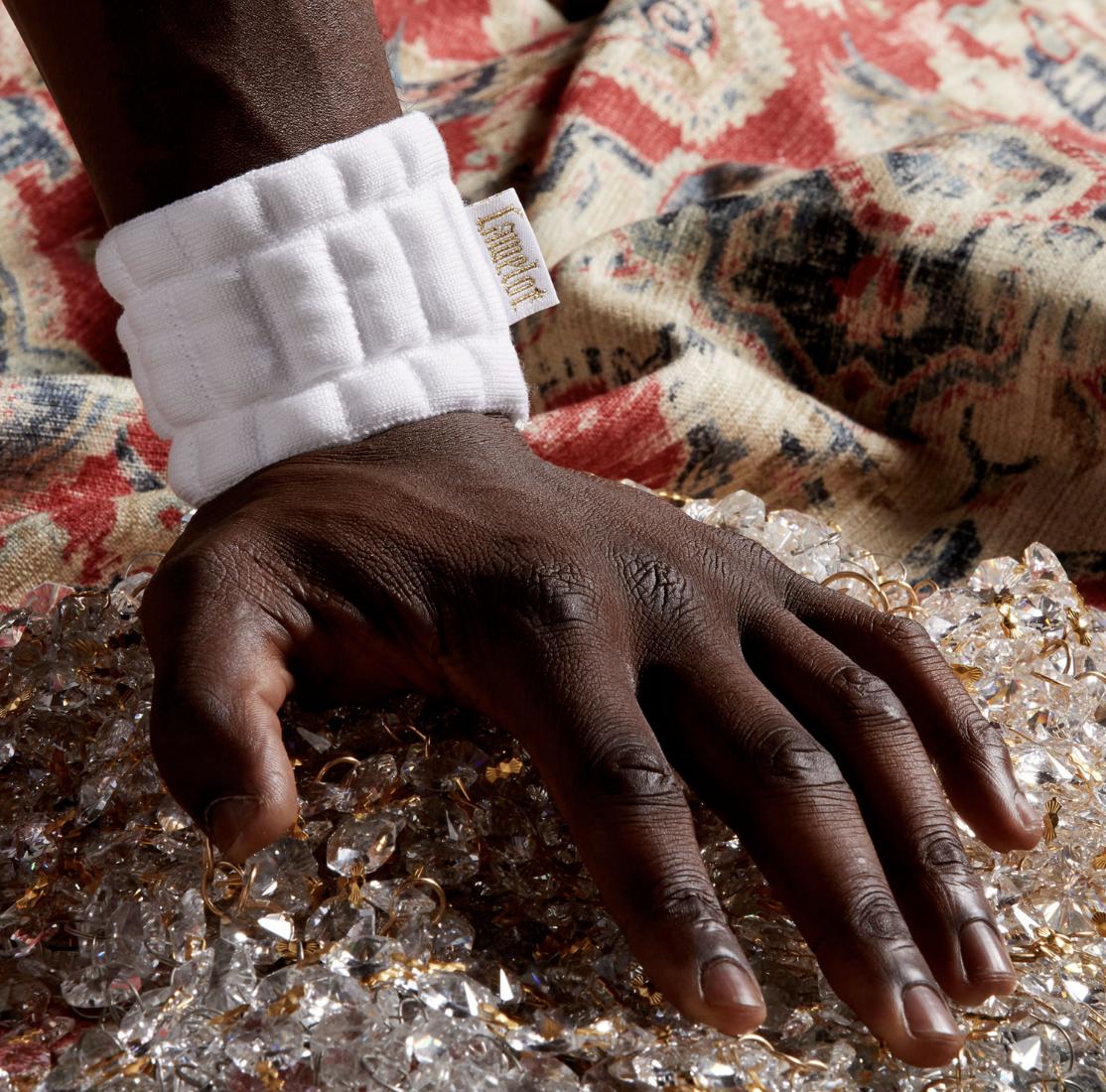 You also have a line of NBA logo prints, “VS x NBA.” How did you get involved with working directly with the NBA?

The NBA reached out last year; Apparently, they had been keeping track of my work. We wanted to see if there was something that we could do together. And the first thing that we landed on is the print collaboration that we did, and I reinterpreted all of the 30 team logos and did them in this gold foil on clear acetate, and they’re all suspended in this transparent frame. They’re not always the team’s primary logo either. A lot of times I thought the secondary logo was more interesting. It’s good you brought the “VS x NBA” up because I have a handful left and I’m selling them and donating a percentage of the profits from the sale to the ACLU. 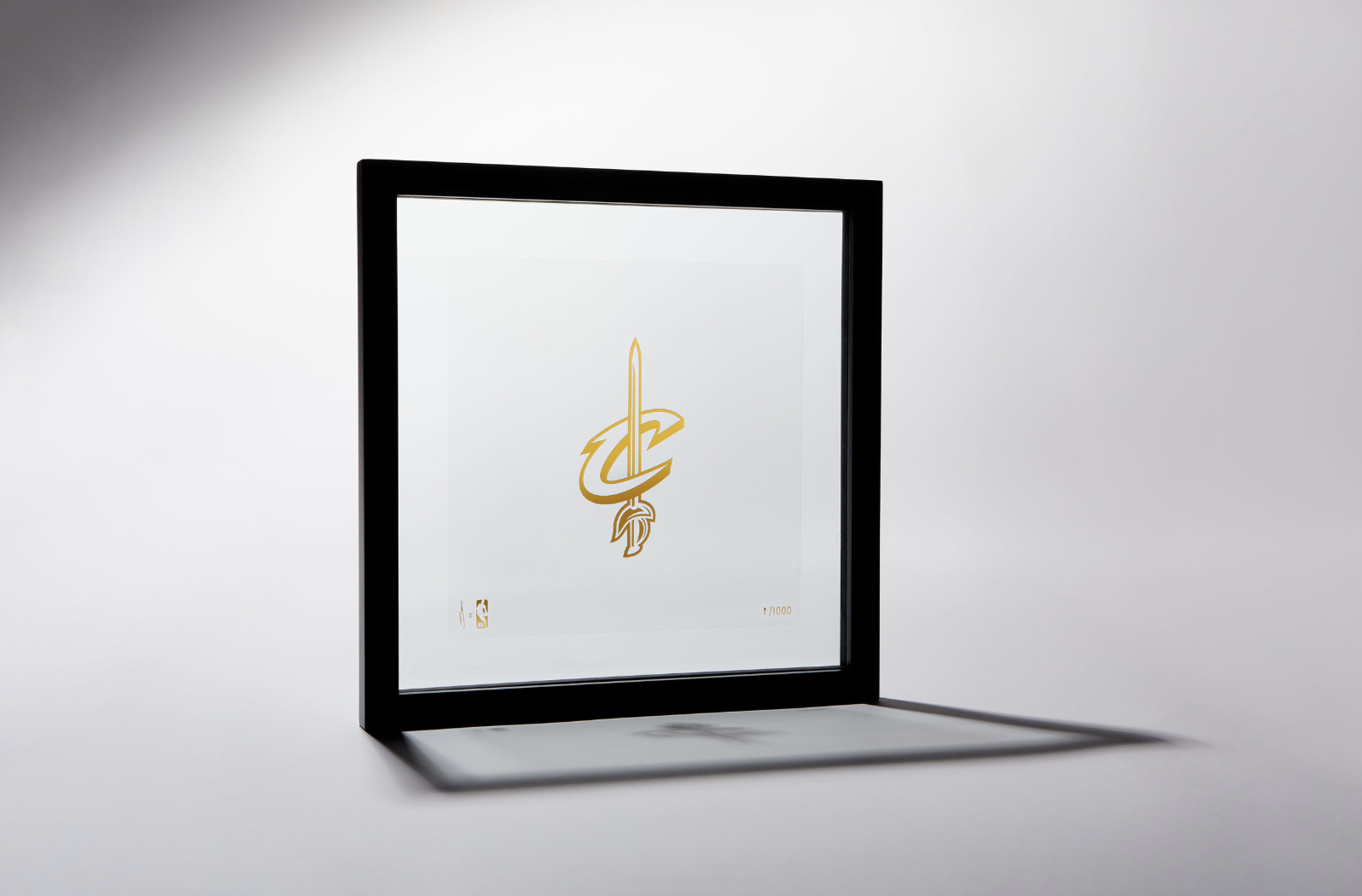 What are you working on right now?

So right now we’re getting ready for a few installations at the MGM for the NBA Summer League in Vegas. I’m always experimenting with some new projects in the studio; I’m doing a new ceramic experiment now that may or may not turn into something interesting. I’m always just trying to challenge myself creatively. I designed the “House of Highlights” moment of the year award that is going to be presented at the NBA Awards later this month. I’m also trying to pitch the NBA on redesigning the trophies for the conference finals for next year.

So the Golden State Warriors and Toronto Raptors have played Game 1 and 2 as of this moment when we’re talking. Have you been watching and do you have any thoughts on the series so far?

So I lived in the Bay Area for a long time and actually recently worked with the Warriors on installations for the new arena. So I have my allegiances with the Warriors although I would love for Toronto to get the monkey off their back and win it all. But I also think that four championships in five years are too historic to pass up, so I’m going Warriors. I have a bet in on Draymond Green being the Finals’ MVP, too.

Is there a team you think people should be watching for next year?

I think the Brooklyn Nets set the stage going into to what’s going to be a very crazy summer for free agency. I think the Lakers remain a marquee destination. I don’t doubt anything that Lebron James is involved in, and I think that he can navigate everything and get above all the drama. But I think the Clippers are going to have a big opportunity to take over Los Angeles.