We’ve compiled our insights and data to provide a Funko Pop price guide for anyone looking to start. Find out more below.

We’ve compiled our insights and data to provide a Funko Pop price guide for anyone looking to start. Find out more below.

Funko Inc. was founded in 1998 with a goal of providing niche, nostalgic collectibles, a small idea that eventually exploded to one of the most recognizable collectible manufacturers on the market.

In 2011, the company significantly expanded its licensed product line and broadened its reach to the masses. Beginning a tangible investment portfolio of Funko Pops isn’t a difficult proposition considering retail prices that range from $10 and up. This low barrier to entry can be a gateway for some into other collectible markets, but it’s also made the Funko Pop! landscape competitive, driving up the price for some of the rarest and most coveted figurines money can buy.

We’ve compiled our insights and data to provide a Funko Pop price guide for anyone looking to start. Here’s what we found.

Funko Pop!: Collectibles for the Masses

The strength of Funko Inc. is in the sheer volume of licensed collectibles the company offers to consumers. Funko Pop! figurines are some of the most widely accessible and affordable collectibles to start investing in. While there are a plethora of niche Funko Pop! options available on the market, Animation, Disney, Marvel, Star Wars, Rock, and Pokémon are the most popular on StockX.

Other categories like Ad Icons, Heroes, and Sports may be less popular than some of the bigger franchises, but still hold great value. For example, The Funko Pop! Heroes DC Batman collectible holds a resale value of $36, according to our data. Even as a San Diego Comic-Con Exclusive released in 2019, this Batman Funko Pop! is relatively affordable compared to other Pops in the Heroes catalog.

Other valuable, but affordable Funko Pop! figurines include the Utah-All Star Weekend Michael Jordan Exclusive, which features MJ in his blue 1993 All-Star Game jersey. This exclusive Funko Pop! collectible was released in March with a retail price of $15, but current sales for $24, according to StockX data. The Heroes category is no stranger to some heavy hitters. While accessible collectibles like the Funko Pop! Heroes Batman The Joker is Wild trades for an average $30 on StockX, others like the Batman Emerald Chrome trade for nearly $500.

For seasoned collectors and newcomers alike, Funko Pop! offers a myriad of collectibles to captivate a wide range of interests. Even if a Batman Emerald Chrome trades for nearly $500, it’s likely consumers can find other Batman Funko Pop! figurines at a price point they are comfortable spending.

The Most Popular Funko Pop! Category on StockX

Animation, which encapsulates both Western cartoon and Japanese animation, accounts for 25% of the total Funko Pop! sales by category on StockX. Considering this category includes popular franchises from Spongebob Squarepants to the Attack on Titan, it’s no surprise animation generates a lot of consumer interest.

Animation figures tend to hold value over time, as the category has the 3rd highest resale average on StockX, a catalyst for its popularity. Despite being the most popular category on StockX, Animation Funko Pop! collectibles sell for an average price of $76, according to our Funko Pop! Price Guide. 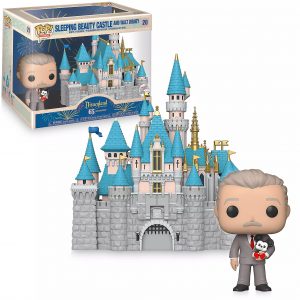 The price point for Rock collectibles is lower than others on this list, trailing only Pokémon as the least expensive Funko Pop! collectibles on StockX. With an average resale price of $43, Funko Pop! Rock figurines are accessible and relatively free of hype, making them a great addition for music lovers and those looking to get their feet wet in the world of collectibles.

Funko Pop! Pokémon figurines have the greatest potential for growth when considering price, according to our data. With 9% market share, Pokémon Funko Pop! collectibles average around $40, the lowest price point compared to other Funko Pop! categories on StockX.

Funko Pop! Star Wars Are the Most Expensive on StockX

Of the ten most expensive Funko Pop! Figurines on StockX, four are from the Star Wars universe. The most affordable on that list is the Star Wars Holographic Darth Vader, which has grown in value since its release eight years ago. At an average resale price of $600, this collectible is as rare as they come, but not the most expensive. 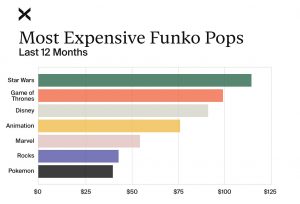 The Funko Pop! Star Wars Holographic Darth Maul is revered as one of the most rare Funko Pops. With only 480 units ever made, its limited supply means the average resale price stands at around $2,600, making it the most expensive single Funko Pop! on StockX.

However, this doesn’t mean that Star Wars figurines are hard to come by for new collectors. While the Star Wars series does include extremely rare Funko Pops, newer releases like the Star Wars The Mandalorian The Child – which resells for just $30 on StockX – are a great way for Star Wars enthusiasts to start their Funko Pop! collection. Should You Take a Funko Pop! Out of the Box?

The decision to open the box of a new Funko Pop! collectible is something that should be weighed by the circumstance of the collector. Those looking for a long-term return on an initial investment, or those who care about longevity, are better off keeping their Funko Pops in the box. Out of the box, the resale value for Funko Pops drops considerably, and they cannot be traded on StockX. However, if you’re looking to display your favorite anime character on your shelf, having a Funko Pop! out of the box is a huge flex, showcasing your hobbies and interests on full display while conveying an emotional attachment to the collectible. 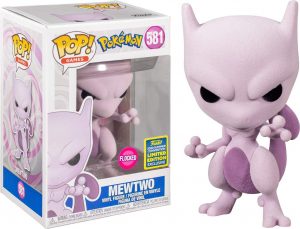 Are Funko Pops Worth Collecting?

While our data suggests certain categories of Funko Pops are more expensive than others, the decision to collect Funko Pop! collectibles comes down to the intent of a buyer. As mentioned before, Funko Pops can be a great gateway collectible for beginners, thanks to the sheer volume and diversity of product. With an estimated 8,000 Funko Pop! figurines on the market, not every single collectible will retain monetary value. However, value is more just monetary.

Funko Pop! collectibles can be a great way to connect with our past and current hobbies. Naruto Funko Pop! Collectibles are a great example of this. While the Naruto anime and manga have concluded, fans can connect with the anime through Funko Pops. The same can be said for the plethora of Funko Pop! Figurines based on characters and shows that are long gone like Cowboy Bebop, Yu-Gi-Oh!, and Bleach, dwindling in our memory as time passes.

The beauty of Funko Pops lies in the eyes of the beholder. If you’re looking for a return on an investment, there is a market for rare and sought-after collectibles in the Funko Pop! catalog. There’s also room for newcomers to enter the space, as Funko Pop! continues to release figurines.

While our Funko Pop price guide indicates that some Funko Pop! categories are generally more valuable than others, there are still collectibles within those categories that offer even beginners an opportunity to collect.

For those looking to simply collect the bobbleheads for their own personal collection, there is personal value in purchasing a Funko Pop! that brings a sense of joy, nostalgia, or an amalgamation of the two.

Thanks to the breadth of the Funko Pop! catalog, there really is a collectible for everyone. Whether you’re a seasoned collector or a newcomer, Funko Pop! collectibles can provide value for anyone. 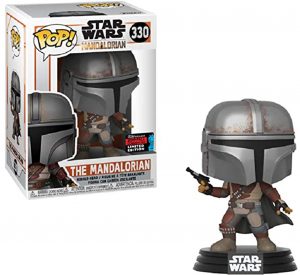