Here’s something you know:  Sneaker culture has always been about “Where’d you get those?” Rocking a pair no one has seen before is what drove pre-Instagram sneakerheads.

Today, finding a pair no one has seen is basically impossible – damn you, Internets! –  but the same concept of scarcity still drives the market.  This is exactly why hypebeast culture has evolved; where the hype around any semi-limited release comes from; why the resell market has exploded.

In our recently published magnum opus (analysis of Nike’s business in light of the resell market) we joked that sneakerheads will buy any shoe as long as its limited and from Nike.  It’s a joke, but like any Louis C.K. joke, based in truth.  That truth stuck an idea in our head around quantifying the two halves of the joke:  Nike & limited.  Specifically, what percentage of demand is derived from Nike (or any other brand, or any other typical demand factor like style, color, etc.) versus what percentage is purely a function of scarcity or limited supply.

Fast forward a week and we found ourselves in Brooklyn, having the pleasure of meeting with Greats Brand. Good guys, good meeting. I learned four cool things: 1) KD was seen rocking a pair of Greats; 2) Obama has requested a pair; 3) The provenance of their name is because every pair is made with at least 1 ounce Great White Shark blood used to coat the leather during an innovative new approach to pre-production water proofing; and 4) The Royale Mowbray is limited to a production of only 250 units, and is still available on their site at the retail price of $179.  Only three of those are true, but it’s the last one that caught our attention.

Compare that to GR Jordan’s which retail for $170 and have production runs in the hundreds of thousands.  They still sell out.

On the other hand, if Nike were releasing a collab with Ronnie Fieg limited to just 250 pieces, would you cop?  Everyone in the room just raised their hands.  And I haven’t even told you what the product is – not the model, not the colorway, not even the price.

I think you get the point.  There’s typically a tradeoff between price and volume:  the more limited a sneaker, the more you have to pay (and vice versa).  As a first step in what could be an in-depth analysis, we decided to look at several sneakers which have similar price/volume profiles as the Greats Royale Mowbray to see if we can learn anything. 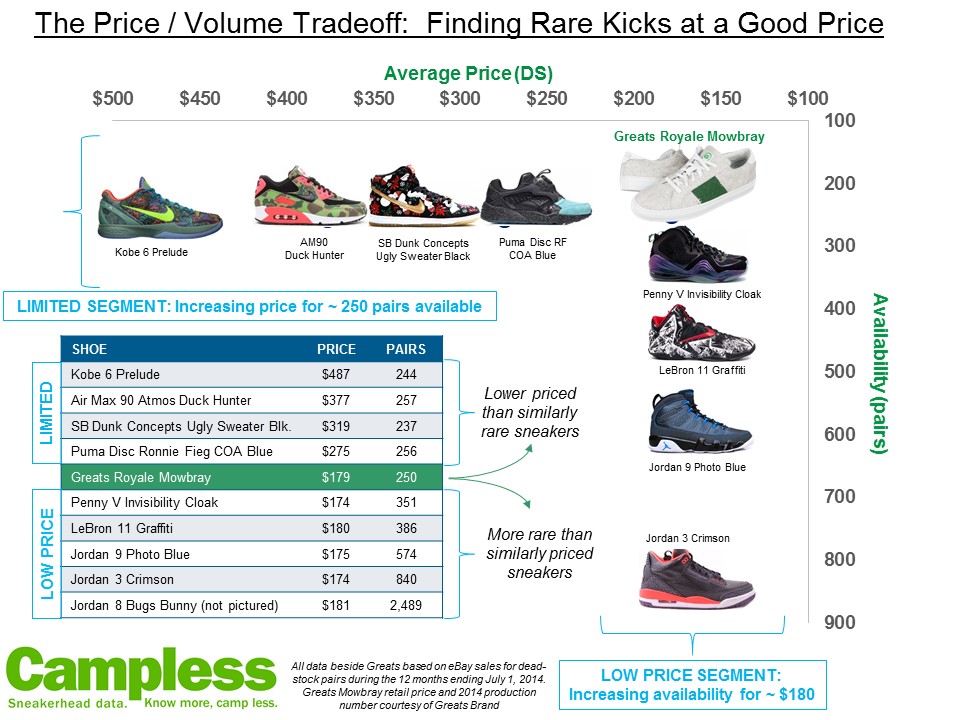 Caveats:  Before you get too excited, let’s clear up a few things:

The Greats Royale Mowbray is:

This implies a great deal – you are getting an extremely rare sneaker for a great price.  But it misses the first half of analysis:  it’s not Nike.

Greats Brand just launched a few months ago and for all we know might end up taking over the sneaker world.  If so, we might look back on having passed on the limited edition Mowbray the way we can’t believe Retro Jordans used to sit on clearance – or at least the way we curse having stuck our Series 1 Garbage Pail Kids to the back of our Trapper Keepers.  The point is, I’m old and most of you don’t get these references.  Wait, no, the point is that there are only 250 Mowbrays.  The value we place on brand can change.  The number produced usually doesn’t and, in this case, defintely won’t.

What do you think about the Mowbray?  What other limited shoes can be copped for a good price?