We break down ten of the most expensive Nike shoes in StockX history.

We break down ten of the most expensive Nike shoes in StockX history. 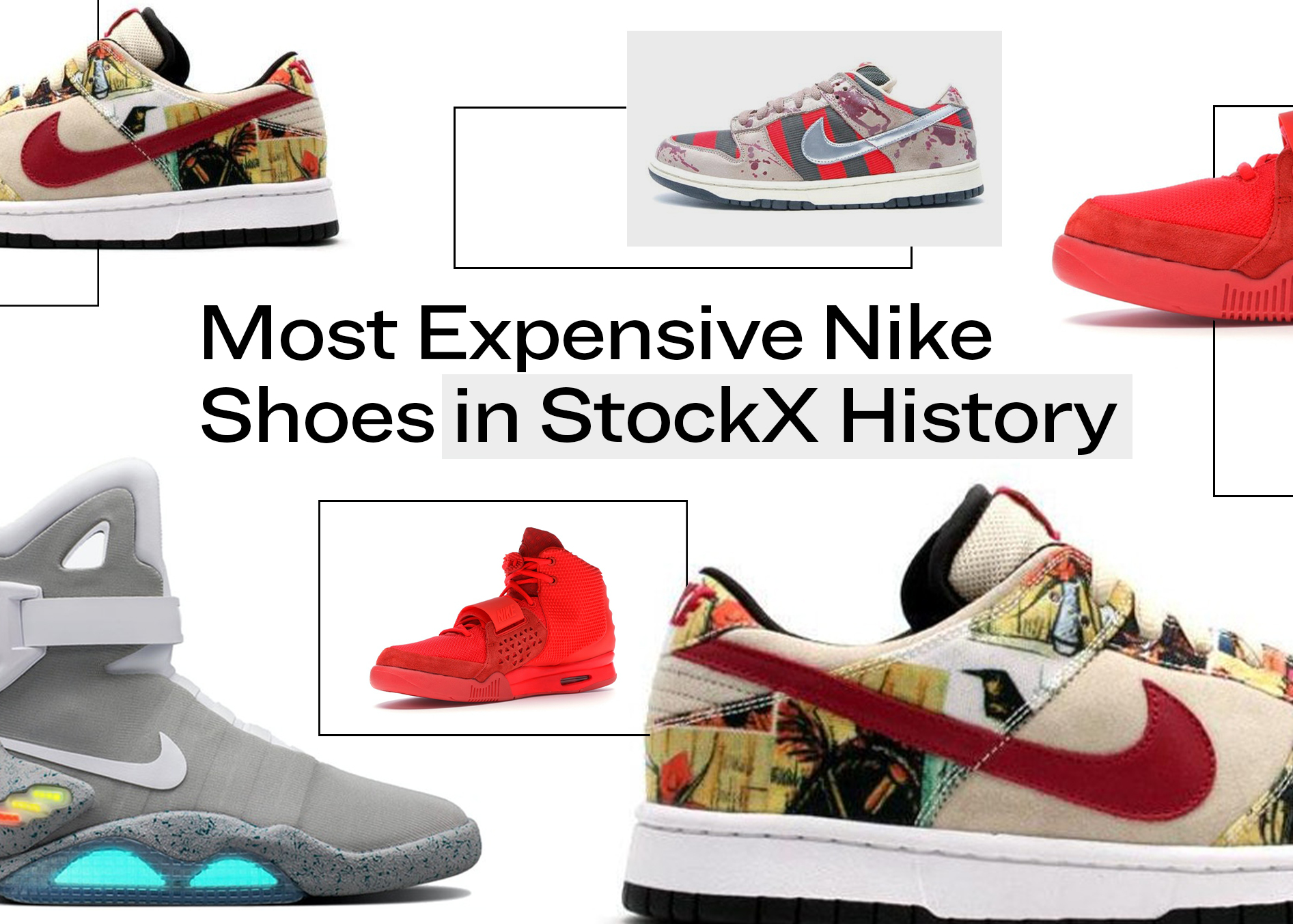 If you can believe it, there was once a time when sneakers were made to be worn until the soles fell off. When they were finished, you would simply buy a new pair. These people of yesteryear didn’t pay attention to colorways or releases because sneakers were a necessity – not a passion. When Nike entered the sneaker industry in 1971, all that changed. Burgeoning sneakerheads began paying attention to detail and fostering a love for each silhouette. That passion has ultimately driven demand, causing the most sought-after releases to acquire a value outside of the retail environment and become the most expensive Nike shoes on StockX.

In a sense, Nike created the need for the resale market and transformed objects made of leather and rubber into savvy investments for the future. Entire communities have been established around these shoes – a subculture of people who are willing to do what it takes to get that next pair. Some Nike shoes have been interpreted by fans beyond their functionality and, like a bar of gold or a municipal bond, have become a financial asset.

To prove that, we put together a list of the 10 most expensive Nike shoes on StockX. For this list, we looked at the entire sales history of every Nike shoe on our platform – including unreleased designs and samples – and identified those with the highest all-time average resale price.

These are the most expensive Nike shoes in StockX history:

As part of the 2004 White City Dunk Series, the Nike SB Dunk Low London was released exclusively to London in limited numbers. Only 202 pairs were produced, causing all SB fans who didn’t have access to head straight to the resale market for a chance to own a pair. These shoes have averaged a resale value of $5,264 in nine sales on StockX. Shortage of supply met with sky-high demand has made the Dunk Low London one of the most expensive Nike shoes in history. 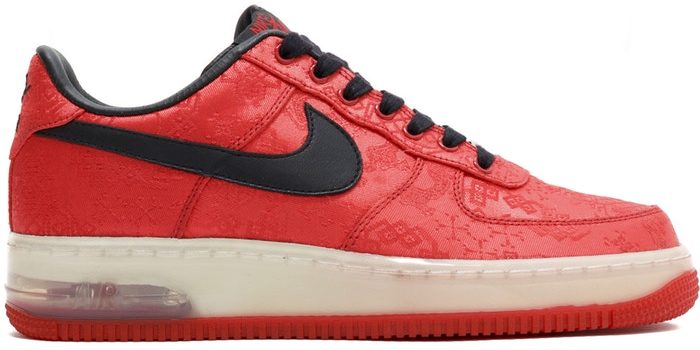 During Lunar New Year celebrations, those who celebrate often offer candy out of a red lacquer box to ensure a “sweet” year. This release pays homage to that tradition by replacing a standard shoebox with a red hexagonal box along with a partitioned tray layer to hold included accessories.

With current Nike Dunk releases selling out as fast as they hit shelves, the public has shifted its focus to Nike SB’s origins and their earliest Dunks. In 2002, when Nike SB became official and a team was established, four game-changing skateboarders had the honor of designing their own Nike SB Dunk. Reese Forbes was not only one of the first to get a signature Dunk, he was also the first to have a second signature colorway with the Nike SB Dunk Low Reese Forbes Denim. A limited production run of just 444 pairs made this Dunk one of the most expensive Nike shoes in StockX history, with an average resale price of $5,509 – a big step up from its original $65 retail tag. 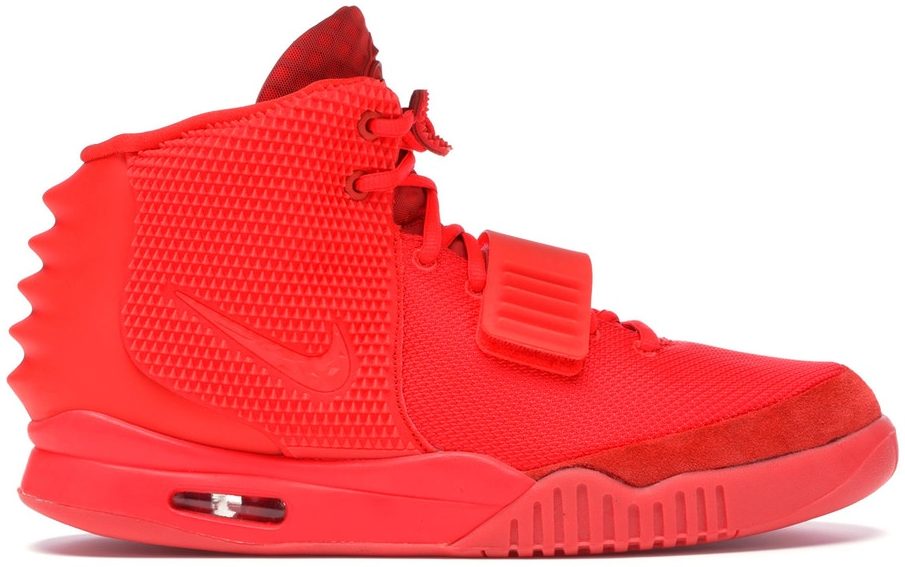 After Kanye announced his partnership with adidas in November of 2013, it was unclear whether the Yeezy 2 Red October would see an official release. Lo and behold, Nike shocked the world with a surprise online drop a few months later. Early resale prices reached dizzying heights on the aftermarket, and in the years since they have continued to soar. In over 140 sales on StockX, the Air Yeezy 2 Red October has averaged a resale value of $5,876 and premiums of 2,250% on StockX. The Nike Air Yeezy 2 Red October is arguably the most famous relic from Kanye’s legendary stint with Nike, and the resale value reflects that historical significance.

During the time that Nike and CNCPTS were working on their second Dunk collaboration, the Dunk Low Blue Lobster, it was reported that a fisherman found a yellow lobster – the rarest type of lobster that exists. So on the eve of the Blue Lobster release, Nike gifted 36 pairs of the Nike Dunk SB Low Yellow Lobster to those working on the collaboration.

Friends and Family exclusives tend to be the most expensive Nike shoes and this pair in no exception. In just nine sales on StockX, the Yellow Lobster Dunks have averaged a massive resale value of $8,675. With deadstock supply dwindling and demand increasing, it’s only a matter of time before this pair of Dunks reaches a five-figure valuation. 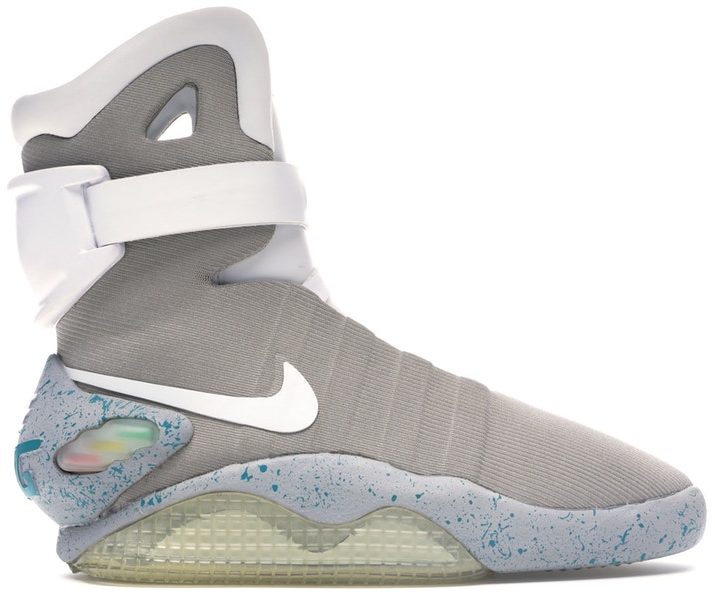 Some of the most expensive Nikes never officially released, the Nike Mag was a mythical design since making its debut in Back to the Future II, with many fans dreaming of the day that they could walk in Marty McFly’s shoes. Decades later, Nike turned fiction to reality and auctioned off a limited number of the Nike Mag Back To The Future (2011) with all proceeds going to The Michael J. Fox Foundation for Parkinson’s Research.

This auction-style release caused the Nike Mag (2011) to become one of the most expensive Nikes in StockX history, averaging a resale price of $9,120 in just over 60 sales.

The Nike Dunk SB Low Freddy Kruger is a reminder that we always want the things we can’t have. This Dunk was inspired by the Freddy Kruger character from New Line Cinema’s Nightmare on Elm Street and was slated to be included in Nike SB’s 2007 “Horror Pack”. Unfortunately, Nike SB did not have permission to design a sneaker with such an obvious connection to Freddy (shout out to New Line Cinema’s intellectual property lawyers).

After a series of cease and desist orders, Nike SB was forced to recall this ultimately legendary release. A majority of the pairs were incinerated – as in literally set on fire (just like Kruger himself). But not every pair was burned. Those that survived eventually became some of the most expensive Nike shoes in history. Most remaining pairs were left with oil marks and no box from a failed attempt at destroying the stock, leaving deadstock pairs as an ultra-rare commodity. Resale prices for the Freddy Krueger Dunks have proven their exclusivity, reaching an average price of $9,380 in five sales on StockX.

In 2005, Jeff Staple elevated sneaker collecting from a niche hobby to a mainstream phenomenon with the Nike Dunk SB Low Staple NYC Pigeon. Only 150 pairs were said to be in existence, making the hunt to obtain a pair a top priority to Nike SB and Staple fans alike. The NYPD might have been able to stop riots from breaking out in NYC on the day of release, but they couldn’t stop these Pigeon Dunks from touching the clouds on the resale market, with an average price of $10,592 on StockX. 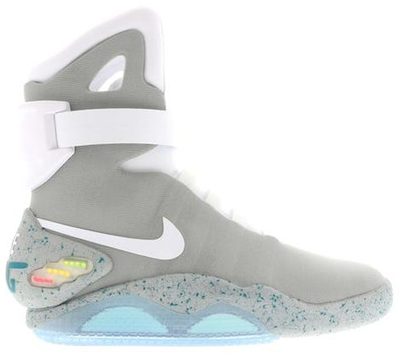 Five years after the release of the first run of Air Mags, Nike found a way to make the Air Mag design true to its on-screen functionality and installed an actual auto-lacing system using Nike Adapt technology. The Nike Mag Back to the Future (2016) was even more exclusive than its predecessor, with only 89 pairs in existence.

Unlike the 2011 release, you didn’t have to be the highest bidder to get your hands on a pair of these legendary Nikes. These shoes released in a raffle format online with all proceeds going to The Michael J. Fox Foundation for Parkinson’s Research. A combination of an upgraded Nike Adapt lacing system and an insanely limited supply has turned this iconic silhouette to the most expensive Nike shoe in StockX history. In just seven sales, these Nike Mags have averaged a resale value of $24,600 – almost triple the cost of its 2011 rendition.

As if we didn’t list enough Dunks already, the Nike Dunk SB Low Paris takes the crown for the priciest Dunk on our list. These Dunks give new meaning to the term “rare.” During the White Dunk: Evolution of an Icon art event in Paris, a limited 202 pairs of Paris Dunks were released- each one being unique. The featured artwork of French painter Bernard Buffet was applied to the canvas that Nike cut out for the overlays of each shoe. In the nearly 17 years since their release, the Paris Dunks have appreciated exponentially. Just this year, the Paris Dunks sold for a historic market high of $51,950.

While the preceding list reflects Nikes that resell on StockX, there are other pairs that have sold at auction elsewhere, and sometimes, the prices are even higher. Here are the three most expensive Nikes to sell at auction:

In August 2003, Nike partnered with eBay to release arguably the rarest Dunk in history: the Nike Dunk Low Pro SB eBay Charity. Only one pair was auctioned off and sold for a massive $30,000. All proceeds went to the Tim Brauch Foundation and also to benefit skate parks in the Portland area. Many were skeptical that the only eBay Dunk in existence had been auctioned off, so Nike made it clear. The original sample was destroyed, cut into pieces, and displayed to the world, thereby confirming the rarity of the auctioned pair. It is rumored that Sandy Bodecker, the man who pioneered Nike SB, received a fully intact pair as a retirement gift from Nike in 2018. 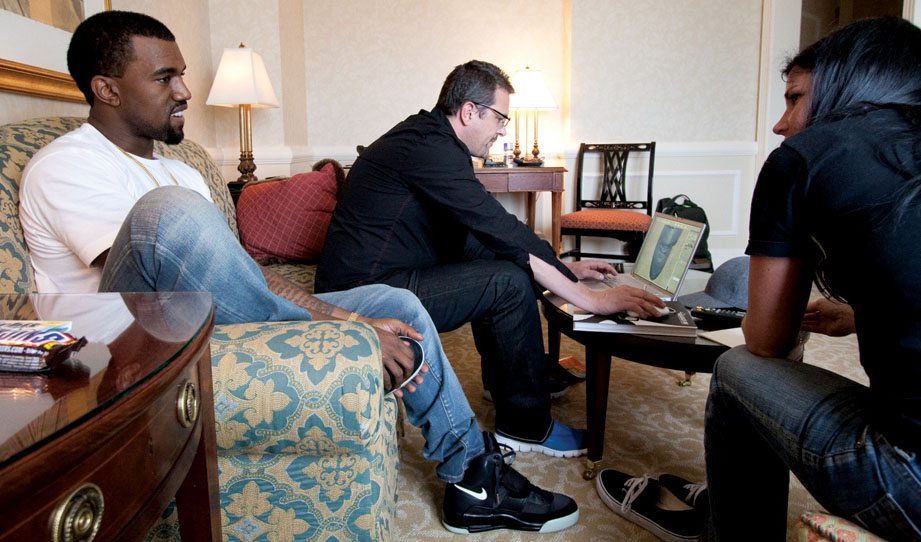 Image by The Source

During Kanye’s 2008 Grammy performance, Ye took the stage in a Yeezy 1 colorway that had never been seen before. It was later discovered that the Nike Air Yeezy 1 Grammy (Prototype) was a sample created exclusively for Kanye’s performance and would never see an official release. These prototypes eventually slipped into the resale market and were auctioned off at a whopping sum of $50,000, proving that anything Ye touches really does turn to gold.

One morning in 1972, Oregon Track Coach Bill Bowerman unexpectedly created the first innovation in Nike’s history while pouring rubber into his wife’s waffle iron. This discovery would lead to the construction of the Nike Waffle Racing Flat, simultaneously changing the trajectory of both running shoes and the Nike brand. In 2019, Sotheby’s auctioned off one of the 12 original Waffle Racing Flats, closing on a monumental price of $475,500. This sale made the Nike Waffle Racing Flat “Moon Shoe” the most expensive Nike shoe in history. To read more about the origin of these historic sneakers, click here.