The StockX Initial Product Offering™ (IPO) has rewritten the rules of commerce, becoming an established method for artists and brands to release in-demand products directly to the market. Over the past two years, we’ve used this method to provide direct access to a diverse array of coveted products, including exclusive pairs of the adidas Campus 80s, Ben Baller slides, Bowman Chrome X with Topps and, most recently, 400 pairs of the limited edition New Balance 650 x No Vacancy Inn. For our fifth Initial Product Offering, we partnered with Jackson Wang to release an exclusive TEAM WANG capsule. The following is a complete recap of the TEAM WANG Initial Product Offering™.

Our latest IPO was a truly global phenomenon. Jackson Wang is an internationally celebrated musician, creator, and fashion icon, and his ascendant merch brand, TEAM WANG, has fans on every continent. The IPO’d capsule consists of three exclusive items, each in a white and gold colorway, the first white colorway ever released by TEAM WANG: a white t-shirt emblazoned with a golden TEAM WANG logo; a white and gold vest with silver tone hardware; and a TEAM WANG track suit including jacket and pants. The TEAM WANG T-Shirt and TEAM WANG Track Suit released in two sizes, while the TEAM WANG vest released in a single size. Each of the three items was limited to just 1000 units, and none will ever release to the public again.

In a StockX IPO, products are priced using a Blind Dutch Auction. This is the same mechanism used to price certain equities in a traditional stock market IPO.

A Blind Dutch Auction starts quite simply: everyone Bids whatever amount they want to pay for the product. That’s it.

All Bids are ‘blind’, which means you cannot see what anyone else Bids, and no one else can can see what you Bid. The only information each participant has is a description of the product, how many units of that product are available, and how many Bids have already been placed.

The interesting part comes when the IPO ends and we set the price. Here, all winners are charged the same amount – what’s called the Clearing Price. To determine the Clearing Price, we simply match the top Bids with the quantity available for each item. So, if there were 10 items available for a particular size, the top 10 Bidders would win. The Clearing Price is then defined as the lowest of those 10 winning Bids.

This is why a Blind Dutch Auction is such a great model: everyone pays the Clearing Price, so most Bidders win the product for less than what they were willing to pay.

After four days of action on the StockX marketplace, the TEAM WANG IPO garnered over 10,000 unique Bids. This was a truly global release, recording the highest share of international Bidders of any StockX IPO to date. In previous StockX IPOs, the share of international Bids ranged from 20% to 30%. But for the TEAM WANG IPO, over 40% of Bidders originated from outside of the United States. Bids came from 56 different countries and territories around the world, with China, Japan, Germany, and the United Kingdom boasting the highest number of Bids (alongside the United States). The breadth and geographic diversity of these Bidders is a true testament to TEAM WANG’s global appeal.

As noted above, this was an international IPO, with Bids placed in many different currencies. After the IPO closed, all Bids were converted from their local currency to USD ($), using the conversion rate on that day. After the conversion, the converted Bids were then ordered from highest to lowest and the clearing price was determined based on that order. To simplicity, all financial numbers used in this recap are presented in USD ($).

To get a clearer sense of how the Clearing Price is determined, the following graphic shows the Bid distribution for the T-Shirt (size 1), which ended up with a Clearing Price of $118. 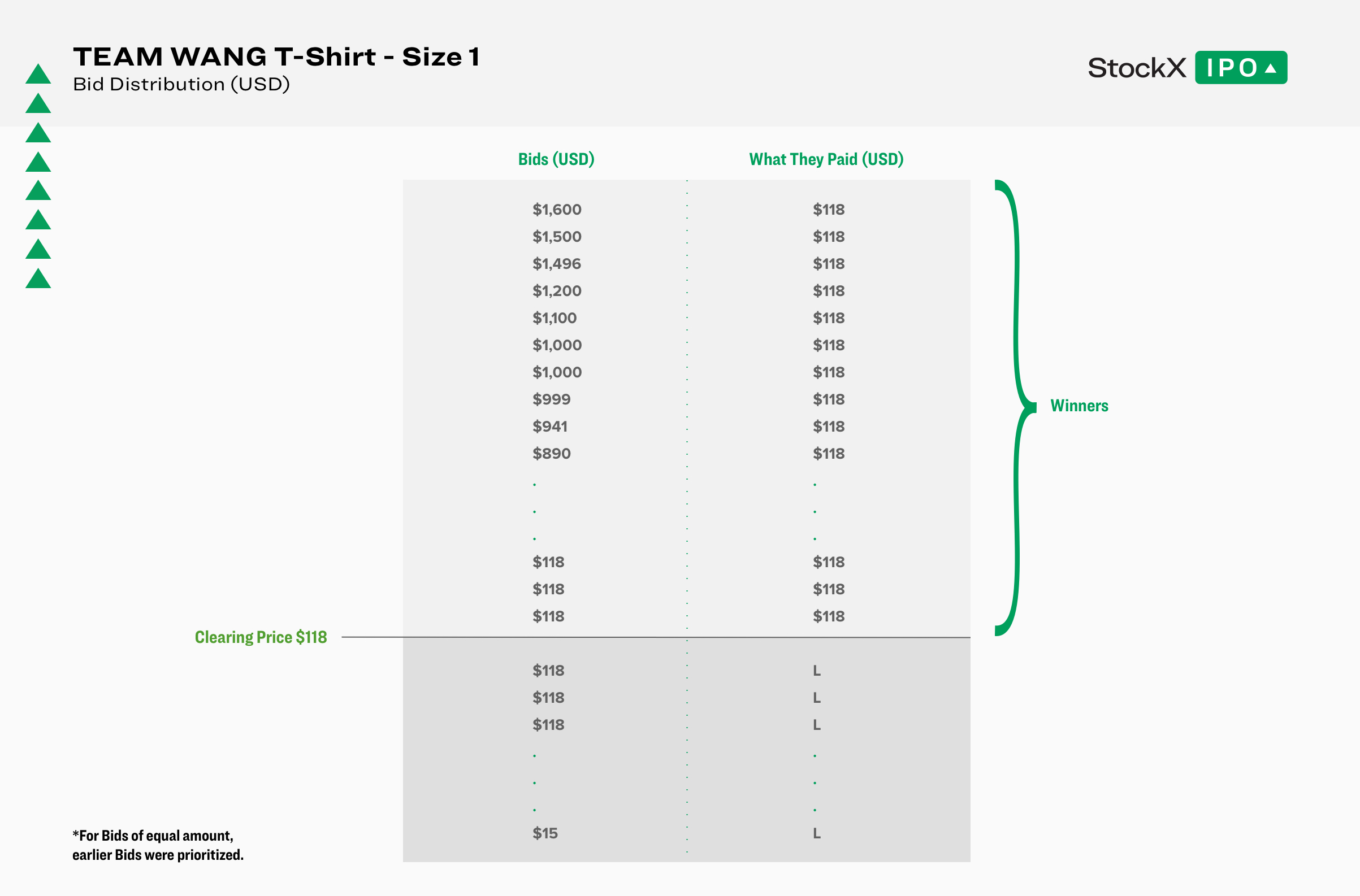 The best part is, almost all of the winners paid less than what they were willing to pay. Given the unique Blind Dutch Auction pricing method, these clearing prices were below – in some cases, far below – the Bids of the vast majority of winning Bidders.

The IPO model has significant advantages over traditional retail pricing. Consumers have a fair chance to get the product they want at a price they are willing to pay (or often less!); and brands can realize the true market value for their products while minimizing the headaches of trying to bring high-demand products to market fairly. Simply put, everyone wins in a StockX IPO.

Across the entire IPO, 92% of winning Bidders paid less than their original Bid – and no one paid more. TEAM WANG was able to sell through all of their inventory, at once, without worrying about sites crashing or whether they chose the optimal retail price. And now that the IPO has closed, winners have the option to turn around and resell their items on StockX, and Bidders who didn’t win or those who missed the IPO can still purchase these items at a fair market price. Already, at the time of this writing, there are dozens of active Bids on the TEAM WANG IPO product pages, and many of these Bids are far in excess of the original clearing price. As of Tuesday, September 15, there were several Bids on the TEAM WANG Track Suit well above $500, while the TEAM WANG T-Shirt had multiple Bids above $500. This strong post-IPO demand on the secondary market is further evidence of TEAM WANG’s global appeal.

Best of all, our IPO model avoids the many frustrations that come with a traditional retail release. Buyers didn’t have to contend against bots, stand in a line for hours, or enter some arbitrary raffle. All Bidders had an equal shot at winning the product they wanted, and engaged in a process that was fair, efficient, and transparent.

We have many more IPOs coming up in the near future. So stay tuned, because the best is yet to come.