If you had $1 billion you could buy the Chicago Bulls, New Orleans Saints, or San Francisco Giants.  You could also buy every sneaker that was resold in the past twelve months.

DISCLAIMER:  We are not wealth management professionals.  Nothing you read here should be construed as financial advice.  However, we feel very strongly that even if you have $1 billion, you should not spend more than $10 million a year on sneakers.  Maybe $11 million if Nike releases a Grand Slam pack for the Air Tech Challenge IV in non-hybrid form, but that’s it.  Regardless, you should definitely not spend $1 billion on sneakers . . . 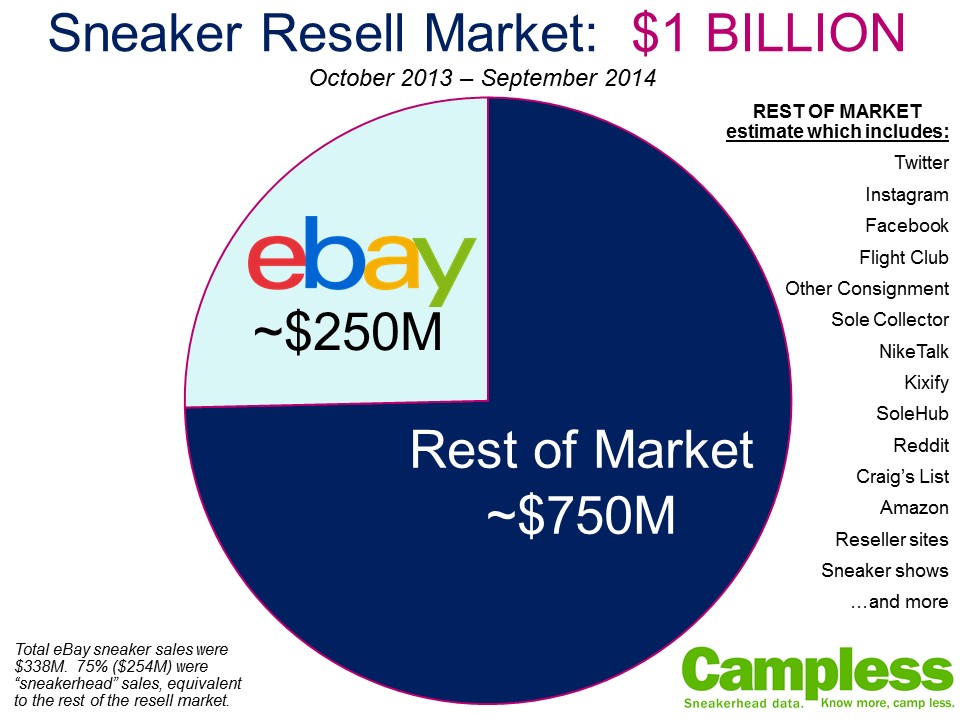 Let’s start by breaking down eBay.  As noted in the lower left of the above chart, total eBay sneaker sales were $338 million over the past 12 months. “Sneakerhead” sales were $254 million.  In order to understand that concept, we first look at total eBay sales over the past 29 months, month by month: 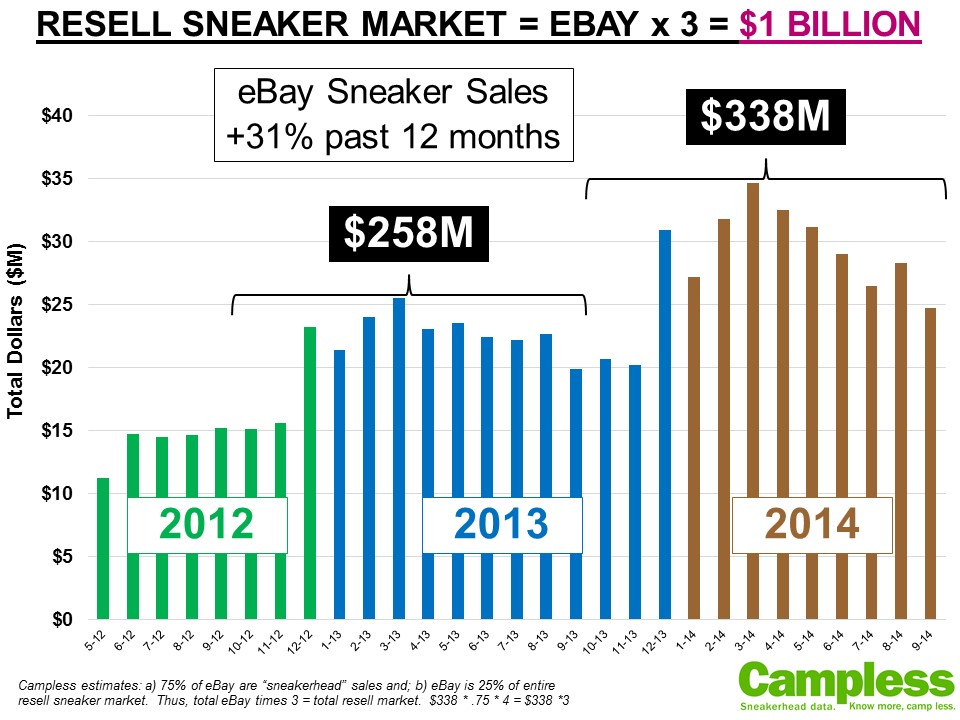 The last time we looked at an aggregate market view was in April, when we calculated that eBay sneaker sales had been $309 million over the previous 12 months.  Now, with data through September, the previous twelves months were $338 million.  The twelve months immediately prior to that were $258 million.  This is a yearly growth rate of 31%.

A 31% yearly growth rate is less than the 42% we calculated last time.  However, when we consider the cyclical nature of the market and the fact that we were at a peak in April, it makes perfect sense.  In fact, we can now see very clear monthly patterns emerging over the past two years.  December through April is the peak, which makes sense as this is bracketed by the holidays and tax refunds, with NBA All-Star Weekend in the middle.  Sales slow during the summer, with a slight uptick during August (back to school), following  by a 12 month low in September, before starting to climb again in October (start on NBA season).  We don’t have retail data handy, but it’s almost certain Matt Powell would confirm a similar trend for retail sneaker sales.

With total eBay sneaker sales at $338 million for the past year, how do we calculate the total market?  Since we began Campless back in April of 2012, we have been trying (continually) to quantify the market as a whole.  While eBay is by far the largest resell channel, the long tail of the market is extraordinarily long.  Millions of pairs are resold via Twitter, Facebook, Instagram, Craig’s List, Amazon, sneaker-only eBay clones such as SoleHub, sneaker blogs such as Sole Collector, sneaker forums such as NikeTalk, individual sneaker reseller sites such as OS Life, consignment shops such as Flight Club, sneaker shows such as DunkXchange and just good ole’ fashion face to face.  The extreme fragmentation of the market makes it virtually impossible to quantify, but our current best estimate is that eBay is one quarter of the sneakerhead resell market.

There is a slight nuance to our estimate that eBay is one quarter of the market.  “The market” is the secondary market for collectible sneakers – i.e., the sneakerhead market.  eBay, however, sells many sneakers which don’t fall into this category, sneakers that are simply grey market retail sales or used goods, like any other category on eBay, including women’s and children’s shoes which you would never see for sale at Flight Club or any other channel listed in the previous paragraph.  A perfect example of this is the 1,909 pairs of Air Monarchs that were sold on eBay in 2013.  We have been able to segment these categories and found that 25% of eBay is non-collectible sneakers, and 75% is what we would consider the sneakerhead market.  Over the past 12 months, $254 million of the $338 million total eBay sales were sneakerhead sales.

Either way, here are your aggregate stats:

As if that wasn’t confusing enough, we will now try to explain how we came to the conclusion that eBay is one quarter of the resell market.  Admittedly, this is an estimate, albeit one based on hundreds of hours of work.  We feel pretty confident that – if anything – we are underestimating it.  At the end of the day, our estimate comes from a combination of three sources:

1.  We can see (or have been able to figure out) the number of listings on other channels with significant volume – Kixify, Sole Collector Marketplace, NikeTalk, and several reseller websites.  We’ve assumed they have lower turns than eBay to estimate what their sales might be, as a percentage of eBay listings to sales (which we obviously know).

2.  We’ve interviewed 20+ people who are knowledgeable about the industry, including some who sell on both eBay and elsewhere; and

3.  Most importantly, we’ve been fortunate that a handful of resell businesses – some quite significant – have shared their sales data with us.  These resellers have all non-eBay sales, and come from various non-eBay channels including consignment, store front, sneaker show, independent website, Twitter and IG.  Based on what we know about these particular resellers in relation to their market – i.e., what do we estimate their market share of their channel to be compared to the other major sellers through that channel – we’ve estimated how big that channel is.  Add up all the channels, compare to what we’ve learned from 1 and 2 and we’ve got a ballpark.

All that said, there’s still a decent chance we’re lowballing it, if for no other reason than this is just the U.S. resell market.

With that as background let’s take a deeper dive into the eBay market, including number of pairs sold and average price: 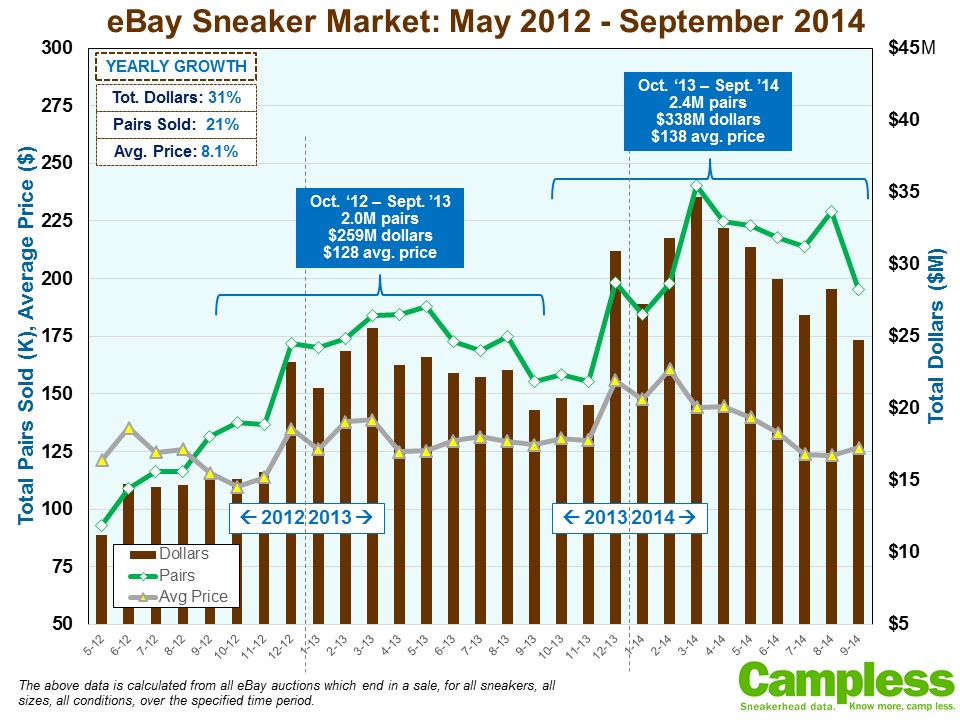 Finally, let’s take a quick look at the profit being made in the secondary market: 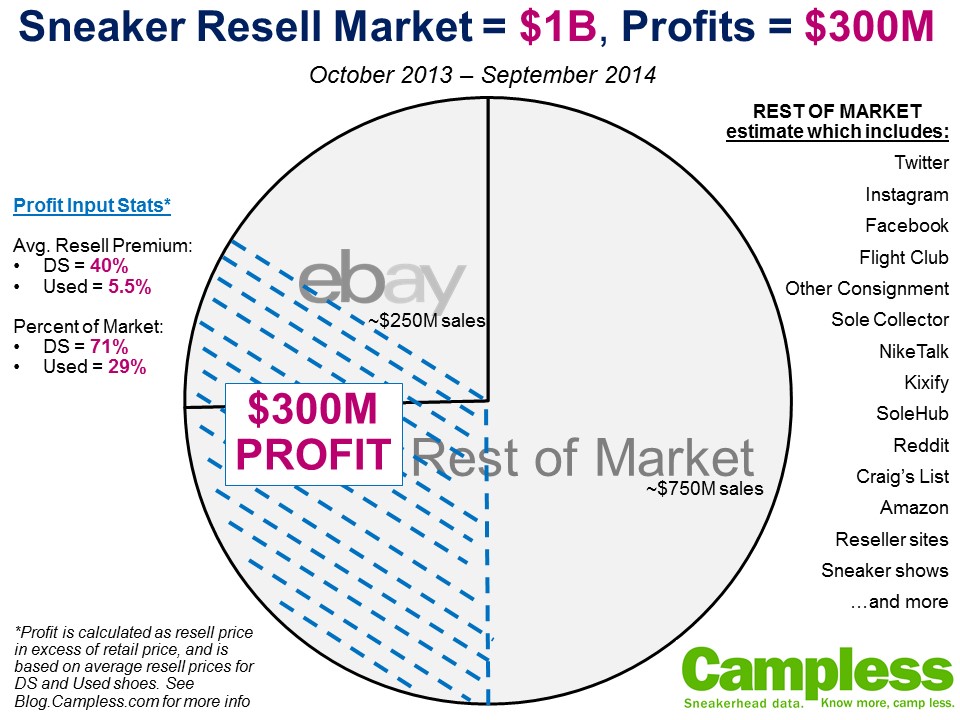 Not much to say on this one, except $300 million is a lot of profit that sneakerheads are making.  Whenever we think about it, we’re always tempted to ask whether this is money Nike could (or should) try to capture.  One day they’re just going to show up at the front door of every sneaker reseller in the world with their hand out saying, “Don’t make us have to buy you out.”  For an in-depth analysis of the Nike/resell profit question, please see our post,”An inquiry into . . . can Nike get that resell cash?”  Included in the post is a detailed explanation about how profits are calculated.

With the holidays season just a chest-pass away, we’re about to enter our peak resell months again.  December 2014 through April 2015 will give us a great view into how big we can expect the sneakerhead market to be next year.  Will we hit $1.5 billion?  Stay tuned to find out . . .