In one short year, Nike x Off-White became one of the most successful collaborations in sneaker history – by resale value, volume, margin, or however you want to measure it. But where exactly did this partnership come from, and why has it sold so well? How does it compare to other popular sneaker collabs? Is the project’s success tapering off with the lower-priced recent drops, or is it still surging ahead? Fear not: StockX’s guide to Nike x Off-White is here to help. (Note: the charts in this article are best viewed on desktop).

Nike has a rich and storied history of collaborations: Supreme, Stussy, Undercover, and Comme des Garçons are a few of the big names. So what exactly is Off-White, and why has their work with Nike been so successful?

It all starts with Off-White’s commanding officer (℅), Virgil Abloh. Abloh hardly has the background of a fashion insider: he grew up in Rockford, Illinois (population: 147,000) and he majored in civil engineering. He’s all about letting youth dictate culture and fashion, not designers. But his main label Off-White is now standard stock in luxury boutiques and department stores, and he recently took the helm at Louis Vuitton as Chief Creative Officer. The dude is pretty popular.

Abloh’s signature style is instantly recognizable: he uses sharp black/white color palettes, accented by plain text surrounded by quotes. For a classic example, check out his Converse Chuck Taylors: they literally have the idea just plain written on the front: 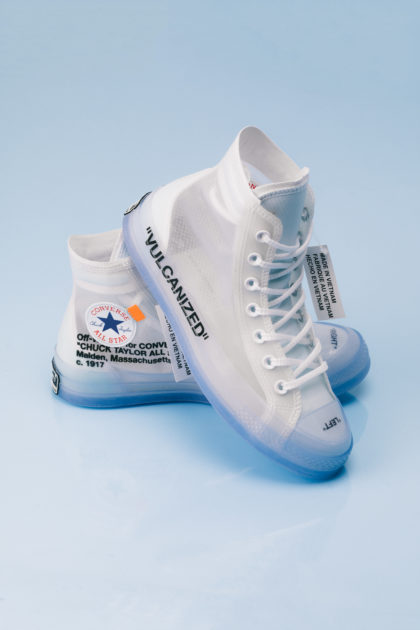 Abloh is a master of finding the essence of a thing and then deconstructing it, and that same tendency is what makes many of his Nike models so interesting.

Abloh and Off-White started working with Nike in 2017, and their first release was huge: it was called “The Ten,” and the idea centered around Abloh’s novel takes on 10 classic Nike silhouettes. Most of them had a bunch of transparent material, quoted text, and slightly adjusted profiles: vintage Off-White on vintage Nike. Nike built up a ton of hype around the project (like an entire book!), and the launch was a massive success. Needless to say, the initial drops sold out quickly.

“The Ten” – Abloh’s original release with Nike – commands the highest and most consistent price premium of any single group of sneakers we’ve tracked. All of the sneakers in the release retailed for slightly higher than normal Nike prices, but skyrocketed to (often) thousands of dollars on the aftermarket, even after subsequent releases doused the original hype. Let’s take a look at some top-line data insights for the original “The Ten” collection.

The first release of The Ten, Abloh’s take on Jordan’s classic high, came in at the most popularly traded on StockX among the group. Given its success, it’s no surprise that two more Jordan 1 colorways were released after The Ten.

The first release of The Ten – a subtly changed version of the classic Chicago colorway of the Jordan 1 – fetches the highest average selling price among The Ten by a nice margin. It’s arguably the most iconic among celebrities, and that shows: the max selling price of this pair on StockX was $4,057, in October of 2018. Yep, someone spend $4K on a pair of Nikes.

The range is the difference between the highest and lowest sale price, and the highest in The Ten belongs to the Air Force 1 Low. Someone very, very lucky was able to cop a pair of these on StockX for only $450. The current average selling price: $1,151.

With the highest price comes the most finicky demand, and the Jordan 1 Chicago had some wild price swings. Right after the initial release, it wasn’t clear if there were going to be restocks or not. That tanked the average selling price to below $1,300 (a bargain!) in December 2017, but it climbed straight up well past $2K in the following months. That eventual (tiny) restock came from Off-White in April 2018, but was too limited to move prices.

After The Ten: fanfare, release, and price analysis

If The Ten was an audition, Abloh nailed it – it’s unclear if there were always plans to keep the collaboration going, but after how the initial release performed it was pretty obvious in retrospect. Nike x Off-White followed The Ten with 13 more releases (with multiple colorways), and there are still a few planned. Overall the group didn’t command the same retail premium as The Ten, but it had some standouts that did.

The UNC themed follow up to the Jordan 1 Chicago isn’t only the best selling of Nike x Off-White’s follow up to The Ten – it was the most popular on StockX of the entire collaboration. This colorway of the Jordan 1 sold almost twice as much as the next best (the recent Chuck Taylor All-Star). But with an average sale price of $848, it’s far behind the other two Jordan 1s in value.

Different shoe, same story: the white colorway of the Jordan 1 didn’t just have the highest average selling price among the follow up to The Ten – it had the highest among any of the Nike x Off-White collection. That edges out the Jordan 1 Chicago from The Ten by a little more than $100 on average.

Even though the average price for the Jordan 1’s blue colorway settled around $850 by year end, someone bought a pair for $3,680. Condolences, my friend. The colorway went for a low minimum of $430 to a lucky buyer just 5 days before the June 23rd 2018 release.

Just like with The Ten, the most expensive sneaker in the group is the most volatile. This colorway’s volatility is barely half that of the Chicago though – by this round of releases it was pretty clear that restocks – of the Jordan 1 at least – were pretty unlikely.

(The above chart shows the average weekly price for Nike x Off-White Jordan 1s on StockX. Click on any of the colors in the legend to toggle the graph.)

Now, let’s talk about colors. For this analysis, we grouped all Off-White x Nike sneakers together by colorway and analyzed the average price of each group. For example, we grouped all Black colorways, all White colorways, and so on and so forth. Across the entire Nike x Off-White collection, we observe an interesting pattern: one-off colors have much higher volatility than classics. In other words, both the top and the bottom selling colorways are one-offs.

The top 3 average sale prices belong to unique colorways – the Jordan 1 in Chicago (Red), the Jordan 1 in University Blue (UNC), and the Air Max 97 in Menta. But the bottom 3 sellers are also one-off colorways: the Air Force 1 Low in Volt (Yellow), the Zoom Fly Mercurial in Total Orange, and the Zoom Fly in Tulip Pink. The more classic colors – Off-White, White, and Black – sit smack in the middle.

White pairs from Nike x Off-White generally sold pretty well (especially on the heels of the most expensive pair of the bunch, the Jordan 1 White), but the average price tanked when the Chuck Taylor All-Star came out – it sells for an average of around $315. Average prices for the Off-White colorway (the classic) have also come down significantly over time (from an average of $1,000 to around an average of $500).

Is the golden age over? Recent Nike x Off-White releases aren’t as hot as they used to be

Every great empire must fall, and we might be seeing the beginning of that – the most recent Nike x Off-White releases haven’t been fetching nearly as much on the aftermarket (above retail) as their predecessors. For a few examples (average selling prices)

These aren’t exactly cheap, but they’re a far cry from The Ten, and even from most of the follow ups to The Ten.

(The bars represent the average selling price of Nike x Off-White shoes on StockX between the dates shown. The Ten refers to the original ten releases, starting in November 2017.)

An interesting comparison case to look at is the adidas x Yeezy (Kanye West) collaboration. This group started out incredibly strong, with average resale prices in the $1,000s for the first few models released. But over time – as hype and volume began to catch up with each other – prices began to come down. Here are the average resale prices for adidas x Yeezy models by release year:

By the end of 2018, most adidas x Yeezy releases were selling at or near retail on StockX. This is a natural progression: great collabs have shelf lives. Is the same thing happening with Nike x Off White?

Maybe. It’s tough to know what’s responsible for these lower prices – in addition to the Zoom Flys being a rather unpopular model (the Off-White colorway in The Ten of the Zoom Fly had the lowest average selling price of the group), we don’t know release numbers, and volume is one of the largest factors in determining hype. Given the recent Air Max 90 releases (selling for > $450), it seems like this might just be a small hiccup.

Prices over Time for All Nike x Off-White Releases

(This chart shows all Nike x Off-White releases on StockX and their average weekly prices. Click on any box in the legend to toggle the displayed sneakers, and refresh the page if you want to reset the graph.)

All of this impressive data begs the question: is this the best sneaker collab ever? The answer obviously depends on your definition of greatness, and the context in which Nike x Off-White has taken off: as part of a world where sneakers and streetwear are increasingly of mainstream appeal, and have expanded beyond the insular but special communities they used to call home. As a company, StockX is committed to bringing transparency and information to the sneaker and streetwear markets that have been dominated by opacity for so long; but that doesn’t stop us from appreciating that numbers can only go so far in communicating a cultural experience. If Nike x Off-White speaks to you, then that’s all that really matters.