Check out new Travis Scott Merch releases from his historic McDonald's collaboration and the release of his new #1 single, FRANCHISE.

Check out new Travis Scott Merch releases from his historic McDonald's collaboration and the release of his new #1 single, FRANCHISE.

Travis Scott let the merchandise flow over in September, releasing new capsules on two separate occasions. His first release arrived alongside his widely hyped and well-received McDonald’s menu collaboration. Over the course of two weeks, Scott released more than 80 McDonald’s themed apparel items and accessories including t-shirts, hoodies, a Cactus Plant Flea Market Collaboration, and a Chicken McNugget body pillow. Later in September, Scott released a second merch capsule, this time centered around the release of his new single “FRANCHISE.” The FRANCHISE merchandise capsule was significantly smaller than the McDonalds release, including only 10 items. 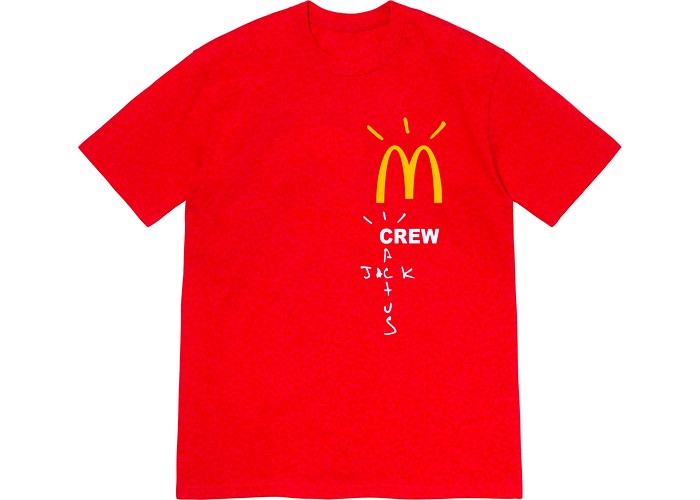 The first rumors and rumblings of the Travis Scott McDonald’s collaboration began in early August and official confirmation was delivered in early September. Merchandise aside, the collaboration’s headlining product was the Travis Scott Meal, an official menu item offered by McDonald’s for a limited time. The meal consisted of a Quarter Pounder with Cheese that included some of Travis Scott’s favorite toppings, a medium Sprite with ice, and a medium Fries with BBQ sauce to dip. Upon its addition to the menu, Travis Scott fans around the world flocked to McDonald’s locations, proclaimed their secret passphrase, “Cactus Jack sent me,” and collected their meals.

At this point, we know for a fact that if Travis Scott is collaborating with someone, releasing a single, or even just stepping outside of his house, we’re getting a lot of merch. The 82 item collection was led with the red and yellow McDonald’s Staff Crew t-shirt which has sold over 2,500 times on StockX already. The Travis Scott Merch t-shirt combines the Cactus Jack logo with a traditional McDonald’s Crew tee, creating a uniform that fans everywhere are trying to get their hands on. Besides the Crew T-shirt, little else has of the Travis Scott merch delivery has even shipped. With 6-14 week shipping times, some items may not even arrive before the end of the year. Regardless, Scott’s fans will likely stand by ravenously as their Chicken McNugget body pillow hopefully arrives in time for the holiday season. As the Travis Scott Merch items begin to ship out over the next few months, check back in with us to buy and sell. 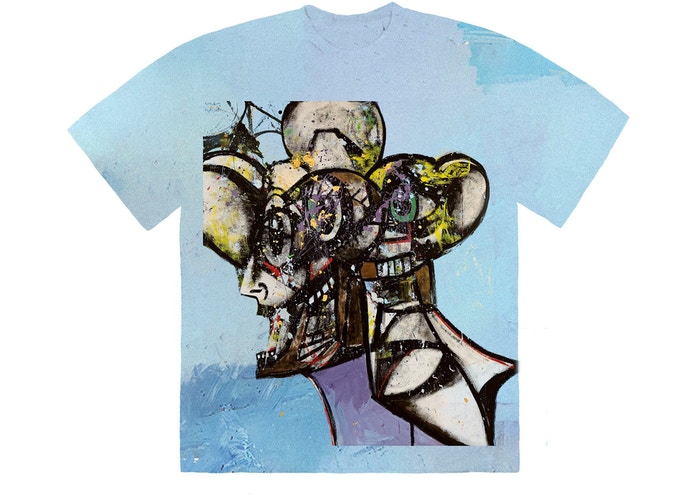 Travis Scott’s newest single, “FRANCHISE”, released on Thursday, September 25th, 2020, alongside a 10 piece merchandise capsule featuring original artwork by George Condo. The Travis Scott merch capsule included eight different t-shirts, a three-pack of white Cactus Jack t-shirts, and a single brown hoodie. The capsule’s standout t-shirts feature the artwork of George Condo, who also did the cover art for the single. Two of the George Condo t-shirts feature an all-over print and the others feature the cover art on the chest or back of the t-shirts. The other t-shirts released feature phrasing or words from the song such as “YUP!” or “GOT ‘EM BAMBOOZLED.” Similar to previous Travis Scott Merch releases, the “FRANCHISE” pieces will not ship for several weeks. Browse the release below and check back in with us over the next few weeks as the items begin to be listed for sale on StockX.