Jordan 4: By The Numbers

This article is part 4 of 17 in the series: By The Numbers

In the context of sneaker royalty, the Air Jordan 4 silhouette has always occupied a place of ambiguity. Like that great character actor in all your favorite movies who never gets the starring role, the Jordan 4 which first released in 1989, has never quite carried itself with the confidence of an A-list star. Given the modesty of the AJ4 pedigree, it might be surprising that it actually ranks among the top three best-selling Jordan silhouettes on StockX, right behind the Jordan 1 and Jordan 11 – and has been on a historic run on StockX over the past several months.

When it comes to the Jordan 1 and the 11, it’s easy to see why they rank so high. Both silhouettes play starring roles in Jordan’s most crucial historical moments. The Jordan 1 carries the history of MJ’s origin: it’s the first signature shoe that Nike released with Jordan during his rookie year and will always be remembered as the originator of the Bred colorway, a color pairing that is world-renowned and a critical element to the Jumpman line. The Jordan 11, meanwhile, represents MJ’s return to greatness, when he earned his fourth ring for the Chicago Bulls after battling through the lowest point in his career to win it all. 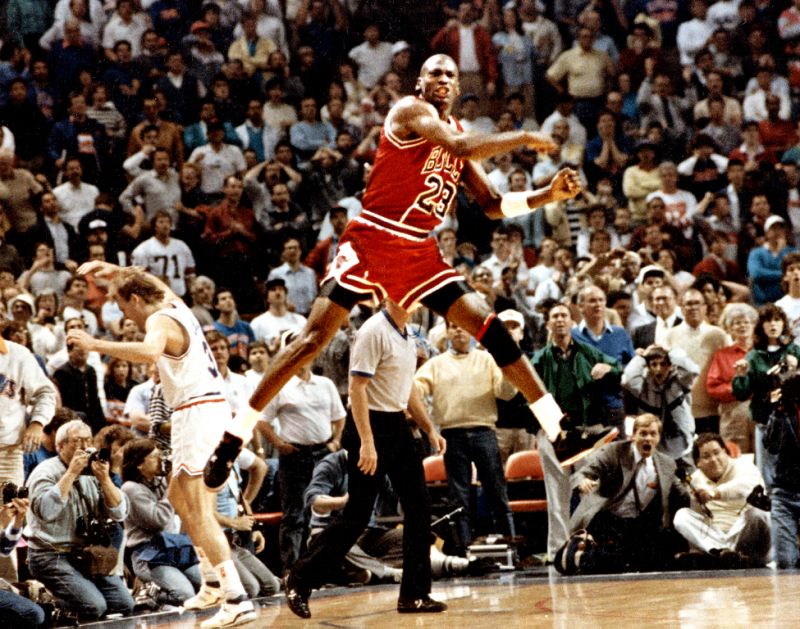 By contrast, the Jordan 4 comes from much humbler beginnings. Sure, the Jordan 4 did feature in MJ’s iconic shot over Craig Ehlo in the first round of the 1989 Eastern Conference Finals. But despite the greatness of that one shot, it was only two points, and it came amidst a disappointing playoff run, cut short by the Bad Boy Pistons in the Eastern Conference Finals.  There’s no great history associated with the Jordan 4, nor is there any controversy. Yet it continues to rank among the most celebrated, popular, and valuable silhouettes in the entire Jumpman franchise. Jordan sales have been rising across the board ever since ESPN aired The Last Dance, and the Jordan 4, as much as any other silhouette, has benefited enormously from the surge in MJ fandom.

In this piece, we go deep into the recent Jordan 4 numbers, to see just how popular – and profitable – this storied silhouette has become over the past several months.

Jordan 4s are one of the most dominant silhouettes in the resale market this year and the proof is in the data. A whopping 85% of all Jordan 4s have seen a resale price increase since last year with the average price increase checking in at $70. Many of the OG colorways that Michael Jordan actually wore have noticed a surge from The Last Dance, but surprisingly, the greatest price increases have instead belonged to Jordan 4 collabs. 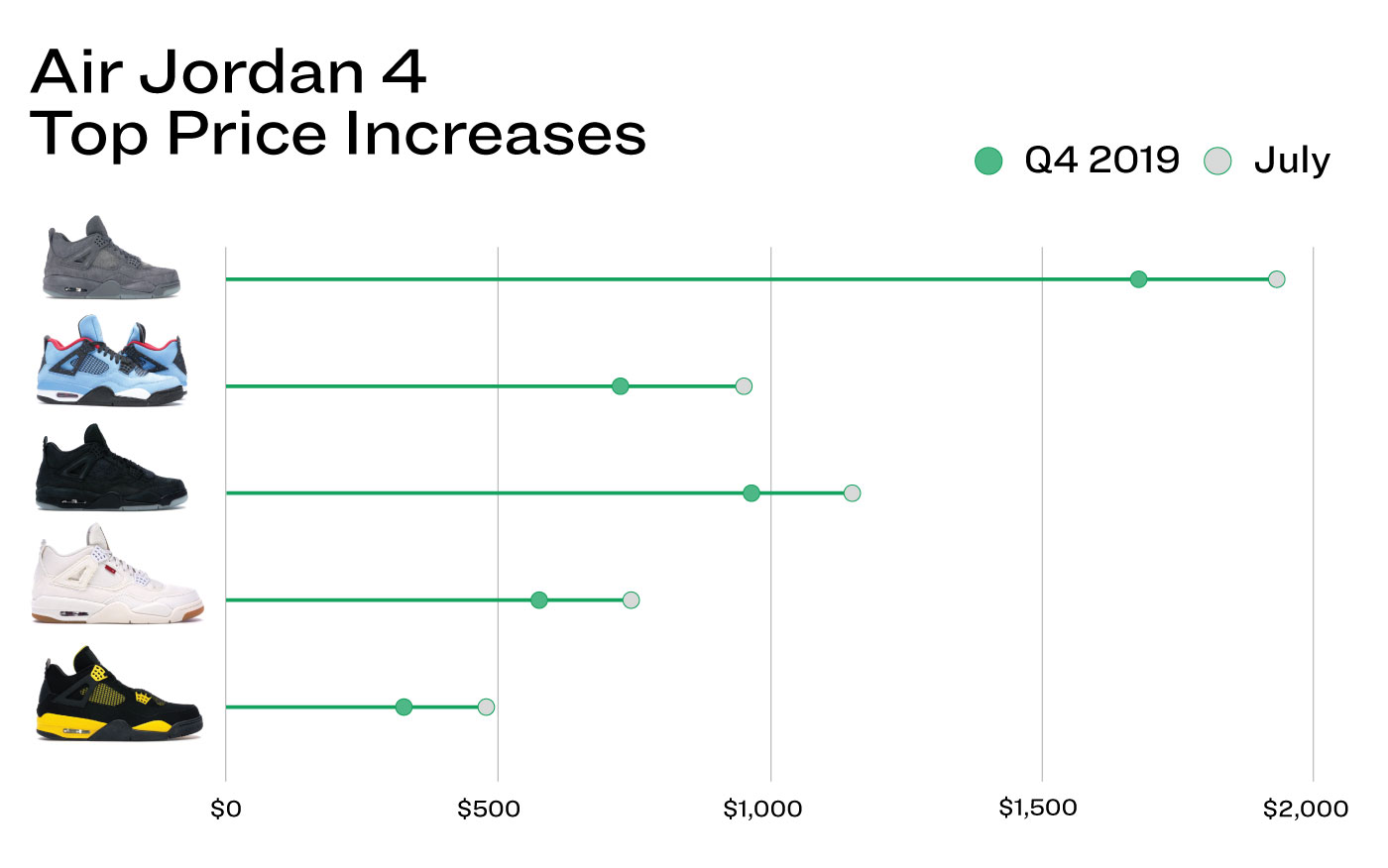 The chart above shows the largest price appreciations in the Jordan 4 category since Q4 of 2019. Out of the top five Jordan 4s whose prices increased the most in absolute terms, four of them are collaborative models. The Jordan 4 Kaws Grey has seen a remarkable rise from the start of the year: it started out reselling for $1,670 in January and is now valued just shy of $1,930 on average – a $250 spike. Jordan 4 collabs as a whole have experienced an average resale growth of $155 since the start of the year with further value increases likely in the imminent future. The growth in demand and value of collab Jordan 4s isn’t surprising considering that they have a history of being some of the most expensive Jordans.

Back in February, we highlighted the top 10 most expensive Jordans in StockX history and included in that list were four Jordan 4 collaborations (Eminem 4s included). It’s true that limited availability and age are two of the main drivers of towering resale prices, but even recently in 2020, more widely available Jordan 4 collabs have seen monumental premiums immediately following their release. Enter the Jordan 4 Off-White.

Going into this year, the only Jumpman silhouette Virgil Abloh had collaborated on was the Jordan 1. Virgil’s trio of Jordan 1 collaborations set records in resale on StockX, but the question still remained if less popular silhouettes would yield similar premiums. They would. 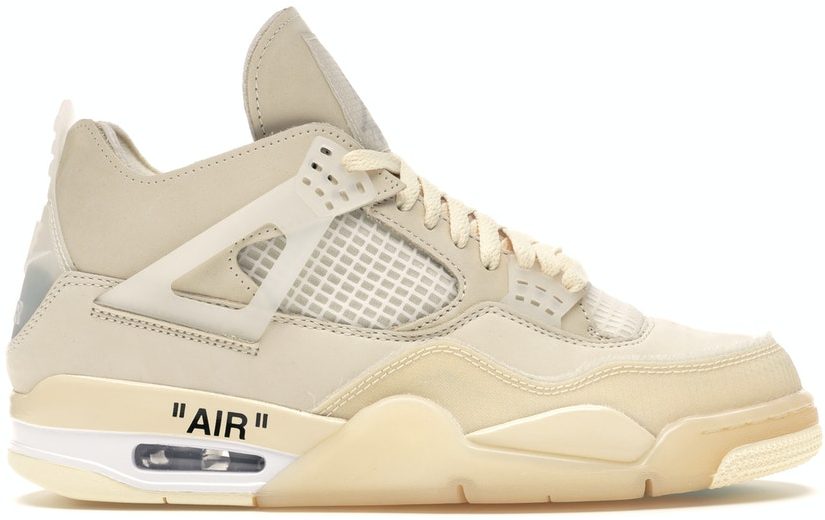 The Jordan 4 Off-White Sail (W) has taken the secondary market by storm since its release last month, sailing past the Jordan 5 Off-White while reaching a new peak for women’s releases. In over 6,000 trades to date, the Off-White 4 has averaged resale prices near $1,100, becoming the most expensive women’s Jordan to ever sell on StockX. The Off-White Sail 4 is another success in the Jordan 4 collab portfolio and naturally, the collabs will continue into 2020.

For those Jordan fans across the world wondering when the next Jordan 4 collab is coming, Union LA has an answer.

Union Jordans Got Next

Ever since early photos leaked, the Jordan 4 Union LA has sparked great debate across the globe and for good reason. The silhouette and material choices stand out as untraditional when compared to other Jordan 4 collaborations. A folded tongue, uncut plastic wings, and bright colored panels stray away from the norm, but Union LA does have a track record of bringing their own swag into collaborations to great success.

The first pair of Union Jordans, the Jordan 1 High Union LAs, also went against the grain and spliced some of the most beloved Jordan colorways to create a sneaker unlike anything ever seen before. Almost two years after release, the Union Jordans are arguably among the most in-demand Jordan 1s on today’s market. 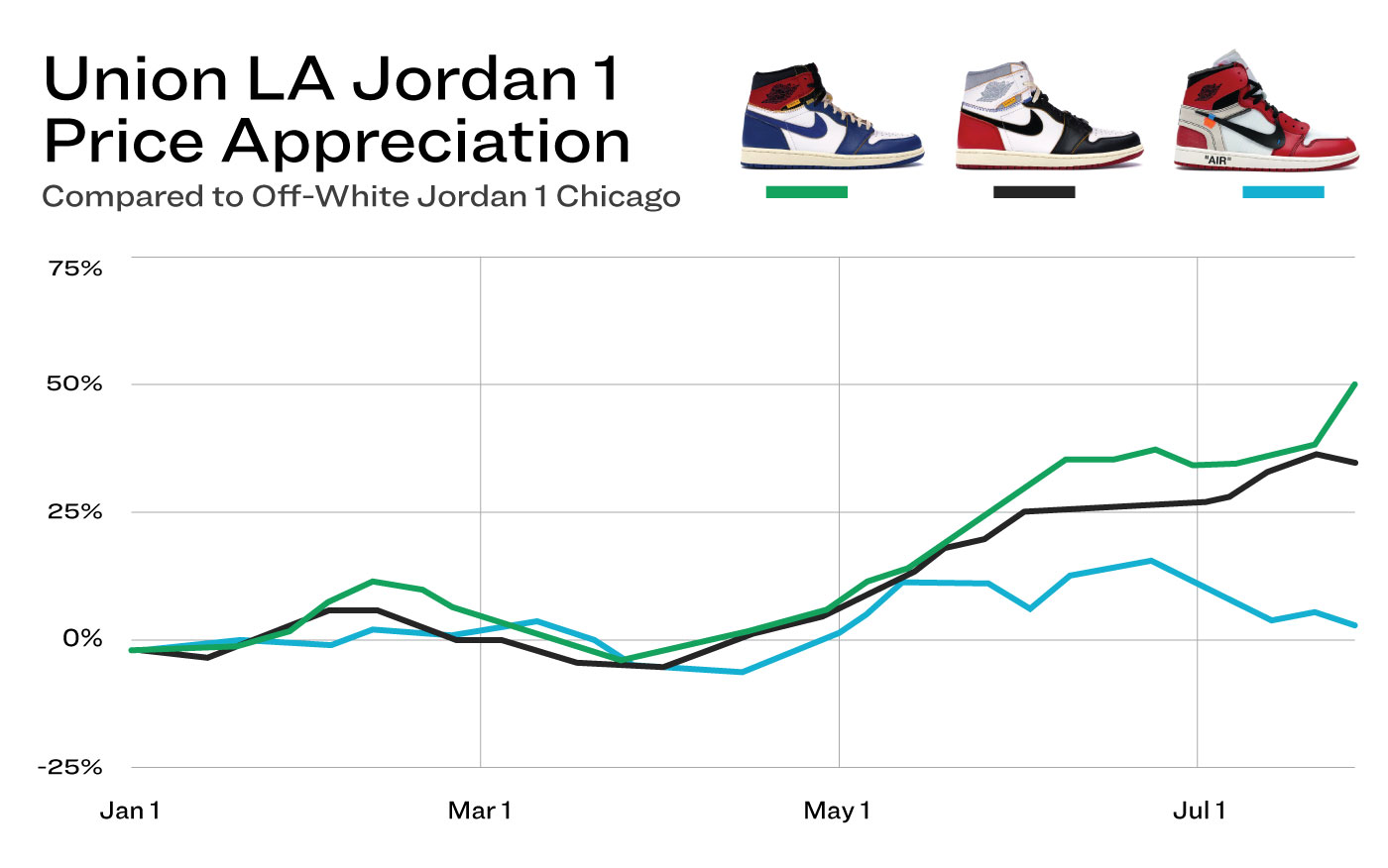 The line graph above shows the recent resale price growth for both Union Jordan 1 colorways, and compares them to the Off-White Chicago 1. The Off-White Chicago 1 is inarguably one of the most celebrated releases of the past decade. Yet since the start of 2020, both Union Jordans have seen dramatically steeper price increases – especially over the last two months. The Jordan 1 Union LA Storm Blue has appreciated over 60% since January while the Black Toe variation has surged over 40%. By contrast, the Jordan 1 Off-White Chicago has seen only a 6% appreciation since the start of the year. It’s clear that there is still love for Union Jordans on StockX, but with mixed reviews louder than ever, the Jordan 4 Union LA could be their biggest test. 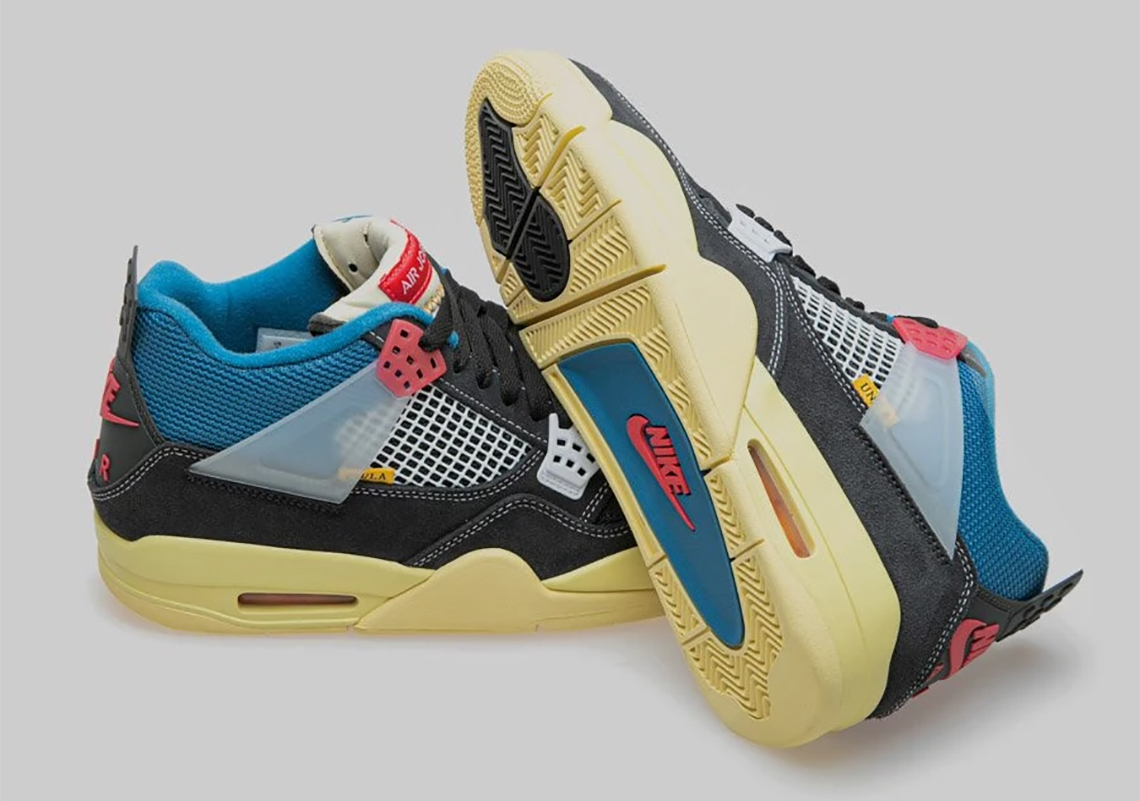 While the Jordan 4 Union LA doesn’t have the traditional OG appeal that the Jordan 1s had, they are still Union Jordans and this fact alone suggests that they will fetch lofty premiums on StockX. Pre-release pairs have already sold as high as $1,800 in the Guava Ice colorway and more bidders are joining by the day. Premiums are likely to fall closer to the official release on August 29th, but if the Union LA Jordan 1s are any guide, they will likely rise in the long-term.

Regardless of whether the Union LA 4s garner universal acclaim, one thing is certain: the Jordan 4 silhouette is in the midst of a historic resale run. The combination of overall Jordan nostalgia and an all-star roster of collaborative partners has made 2020 one of the best years to date for the venerable Air Jordan 4. Back To Cool: Homecoming & Going

Back To Cool: Homecoming & Going